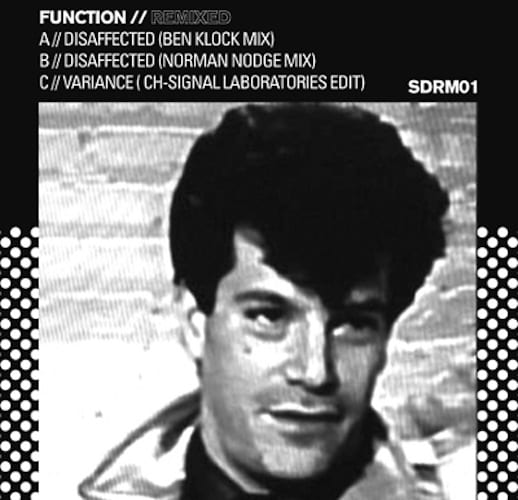 The Sandwell District collective have been at the forefront of revitalising “proper” techno over the last 4 years or so, drawing on a burgeoning antipathy towards the modern minimal sound – celebrity clothing lines and all – as well as the re-assertion of Berlin as the arbiter of the scene’s direction. Largely anonymous releases from a hard core of largely anonymous artists (who co-run the operation) such as Function, Regis and Silent Servant have all promulgated a satisfying re-synthesis of Techno’s disparate strands into a classic yet contemporary whole: the clangorous, industrial ghost of Regis’ Downwards imprint, the cavernous atmospherics of Basic Channel, to the relentless propulsion of classic 90s Tresor.

Function’s “Disaffected” first appeared around July 2008 as one of two cuts built around a darkly modulated synth delay over relatively pared down rhythms, but Ben Klock’s rework introduces an entirely new bedrock of a syncopated, tuned percussion loop, using fragments of the original’s central timbre as rhythmic punctuation. While the groove is nowhere near as weighty as some of Klock’s solo material such as “Sub Zero” and “Check for Pulse”, the effect is nonetheless wonderfully hypnotic and, as expected from a member of the Ostgut set, Klock periodically envelops his production in swathes of reverberant texture for further sonic and spatial interest.

From one Berghain staple to another, Berlin’s lawyer/DJ/producer Norman Nodge offers his more tribalist interpretation of the same track, this time focussed on an exceptionally powerful kick drum, energetic & skitter-shot analogue hihats and, once again, sprinklings of the original’s bedrock synth timbre. Things are kept extremely minimal from there on; with the barest of high end arpeggios and some subtle ambient FX enlivening proceedings. Guaranteed to give the finest club systems a thorough mechanical check-up, this is as brazen an antidote to the anodyne plinky-plonk of so much recent “minimal” as you could possibly wish for.

Rounding off the release is another outing for Ch-Signal Laboratories’ superbly panoramic edit of Function’s “Variance” – after it’s initial appearance alongside Function’s own “Reduced Edit” back in July 2009 – whose long tailed 808 kick, resonant ping pong synth lines and looping alarm arpeggio remain the same, and just as effective. Despite the repeat appearance, one is unlikely to feel short changed by this latest 12″. Sandwell District vinyl has probably already reached the status of hugely desirable collectable, born partially out of their nostalgically purist approach to identity and commercialism, but more importantly their unwaveringly purist approach to sublimely primal, yet sophisticated and atmospheric techno. This really is as good as the genre gets in 2009.