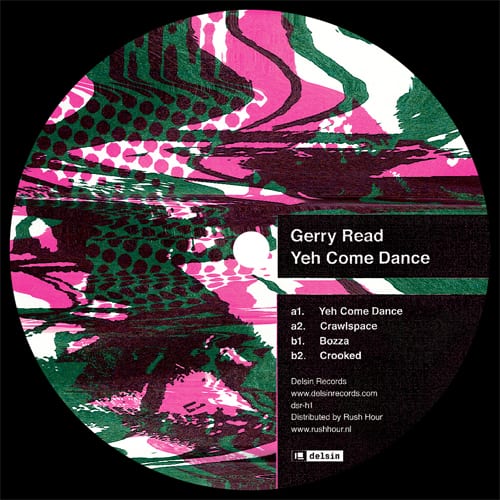 “Raw” – it’s a word I seem to be using more and more these days. I don’t know whether this is due to a production trend among the underground house music producers of today – possibly a kind of anathema to the mainstreams penchant for making everything so shiny, loud and perfect sounding – or whether it’s just the way my tastes are going recently, but one thing’s for sure, no matter how dirty and messy some tracks get, they still sound more interesting to me than their clinical counterparts.

Gerry Read was a name I’d not encountered previously. Not exhibiting what I’d call the ‘classic Delsin‘ style, these four tracks from the 19 year old are the real deal though and will not fail on a discerning dancefloor. Quite where he draws his inspiration from intrigues me – whilst his beats are stripped right back to a clonking, tapping groove accentuated by jazzy percussive snippets that practically scream ‘I sampled this off some busted old jazz record I found in a skip’, the topping is a deliciously abstract palette of samples which are never quite complete enough to reveal their true origins. These tracks are proper examples of the artform of sampling – the appropriation of source material for the sole purpose of making something rather different, resulting in a complete recontextualisation.

Closing track “Crooked” brings Actress to mind but without quite so much emphasis on the compressed granulation. It raises the tempo a little on its forebears and I expect this one to find favour with many a DJ working the floor. But there are also plenty of jocks who’ll pick up on the skanking basement grooves of its brothers and as a result this EP will be a fixture of many record bags during 2012. The highlight for me is the bluesy groove of “Crawlspace” which sounds like someone took St Germain to the wrong side of the tracks and gave him a serious beating. With such a young producer sounding so accomplished, it’s going to be fascinating to hear where he progresses to next.