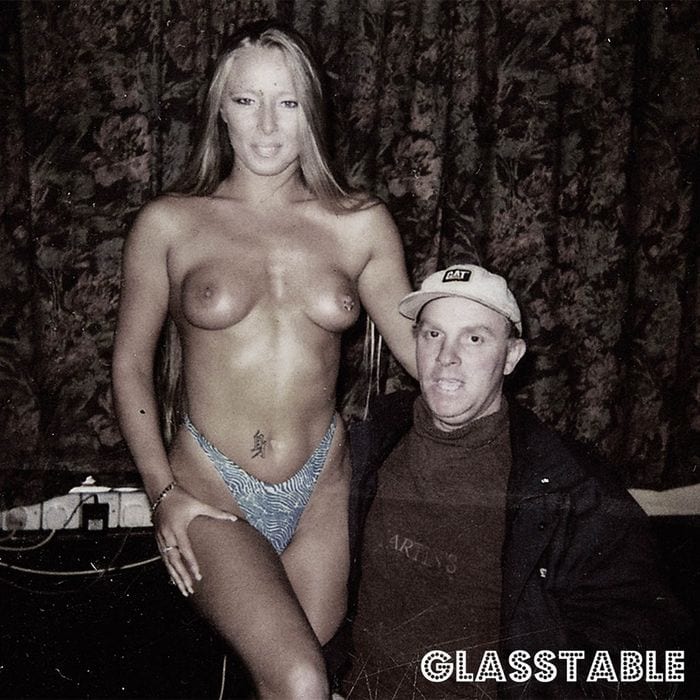 Glass Table is the new sub label from Brighton based Hypercolour records. Their aim is to focus on the more seedy side of dance music, the kind of beats you put on when you get back home from a club with your friends and refuse to sleep and counter the effects of ‘sleep’, by focusing all their efforts by carefully spreading substances across that ‘glass table’. Yeah you get the picture, Glass Table is all about listening to all sorts of weird and wonderful sounds. Glass Table records launches with the ‘Hush EP’ featuring two of Detroits most respected mavericks Jimmy Edgar and Kyle Hall, on remix duty.

If you haven’t noticed the artwork yet for the EP, have a good look, because it’s actually quite hilarious and I can’t even imagine where this was taken or even found? Guess that’s thanks to Google! A miniature man stands bemused alongside his trophy, yeah that bare naked sex ‘cougar’, grrr. There’s no doubt the artwork instantly conjures up seedy thoughts and can only mean it’s a reflection of the music. Rip open the vinyl’s film casing and slide out the actual 12″ and you’ll be in for another surprise, good old KFC’s Colonel Sanders cheeky face grinning at ya, both of the A side in red and on the flip side in blue!

Both of Edgars tracks ‘Hush‘ and ‘BThere‘ are deeply lo-tempo, measuring in at about 106 BPM. The tracks have different elements in them from electro, broken beat to house. It gives them this sexy future disco sound to them. It might sound confusing but this is exactly the kind of subtlety that Jimmy Edgar does so well when producing tracks. Kyle Hall’s moulds ‘Hush‘ into a rhythmic deep house Motown cut, injecting an uptempo groove akin to Carl Craig or Shed. Overall the ‘Hush EP’ delivers superbly original Detroit influenced music from both producers and are a give a great indication on Edgars new album ‘XXX’. This is what Jimmy Edgar himself has to say about the official music video:

“I actually think the video is dirty as fuck but brilliant. you can see the despair in the girls eyes and the blond in the beginning is gorgeous and so sad. the end when the man goes “you like? is it Ok? Nooo?” and then the girl looks disgusted and moves away…This is modern art film, exposing the sick tragedies that women endure to make money or create fame.”