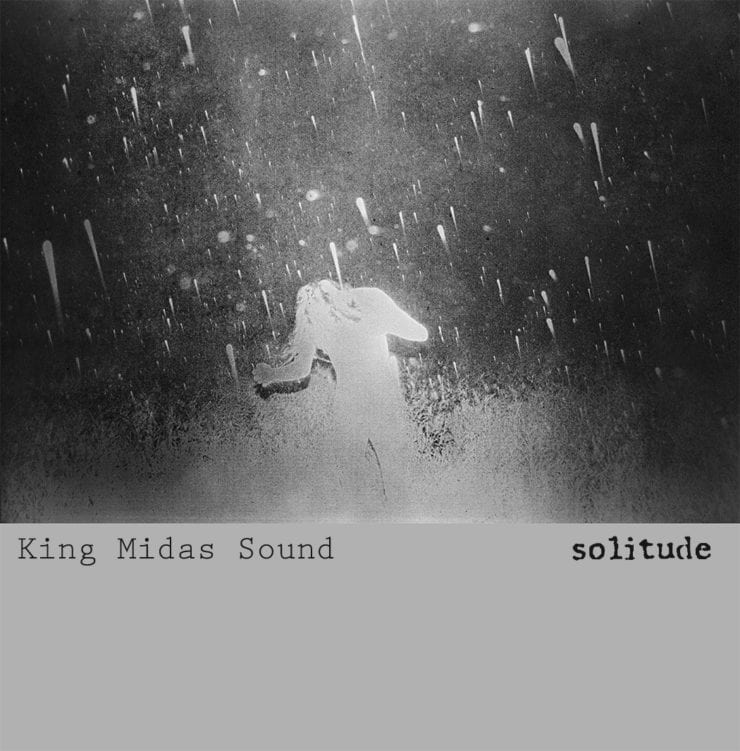 To say that you listen to “Solitude” would be a gross misinterpretation of the experience. It is, without sounding too dramatic, more of an exploration through the depths of a man’s shattered psyche. It is to be a helpless onlooker in a stranger’s wounded ego, watching in abject dread as demons gnaw away at his insecurities like carrion birds. And soon enough the initial thrill of psychic eavesdropping is washed over in a bitter wave of guilt for partaking in such a gross invasion of privacy.

Once you find your footing in its atypical setting, you will begin to appreciate that the lines between reality an art have a habit of getting blurred with King Midas Sound’s new LP. It’s that synthesis of fact and fiction what makes it so immersive for the audience and indeed what fuels the electrifying delirium and paranoia of the narrative.

“Where middle of the road muzak paddlers sell audiences and ears too short with tired formulas, Roger and I have written an album that is difficult, intense, disturbing and out on a limb.”

This record is the antithesis of glamourised pop abstractions about romance that don’t hold true today, if they ever did. This is, the turning of a man inside out. A heartbreak induced fever dream that he can’t seem to wake up from. It’s the fragmentation of logic that unexpected loss can incite in the heart and more importantly, the mind.

The duo has evolved the tone poem explorations they garnished the ambience of “Edition 1” with to the point where they are now very much, the foundation of the dish. You can tell Robinson is clearly self-conscious of the power of words and uses them economically, but to great theatrical effect. The result is a soundscape and narrative that is effortlessly cinematic in its scope, painting vivid pictures in the mind’s eye as keenly as if you were watching them unfold on screen.

‘The Lonely‘ is a shockingly powerful statement about societies perception of loneliness and the fear it inspires in the collective consciousness. And in ‘Who’ you can hear the neurosis in the narrator develop to the point where his sense of reason gets completely consumed by the primal pull of jealousy and envy. Sometimes you feel like he’s paying a penance for his sins and other times you have sympathy for the utter lack of control he has on the malaise of his spirit.

Diseases are an ailment of the flesh, superficial when magnified through the lens of divinity. Sickness of the soul, however, can wreak havoc with the spiritual DNA of ones very selfhood and as demonstrated by the album’s ill-fated protagonist, it can end up ravaging a person’s health worse than any virus known to man.

‘Solitude’ is out now in double vinyl and digital formats. Order a copy from Boomkat.