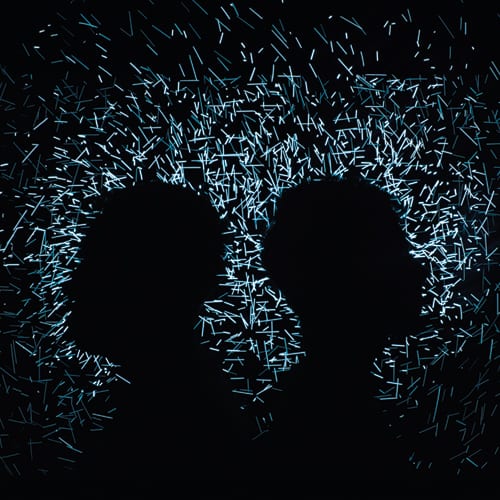 Over the past year I’ve gradually become a die-hard Letherette fan. After listening to their first ever release on Ninja Tune ‘Featurette’ last year, I’ve been listening to them religiously ever since. The Wolverhapton duo have been elegantly combining elements of funk and hip-hop, generating original sounds and illustrious grooves that land the duo firmly in soulful and melancholic territory, situated between both genres.

Letherette have already released four excellent EP’s alongside remixes for Machinedrum and Bibio, plus a recent Boiler Room appearance along with a spectacular opening for Jets at London’s XOYO.

Their new single ‘D&T‘, offers more instrumentation and heavy 80’s-style guitar riffs. The chopped up vocals and bubbly pulses of ‘Restless’ are hypnotic, a standout gem that shows Letherette’s evident ability to dominate the dance floor.

Warm and vibrant vocal samples are a common trademark in Letherette’s sound. While it is often difficult to figure out what those passionate female vocalists are singing about, after a couple of listens the lyrics become more and more comprehensible, adding another dimension to the sound and making for a more memorable experience. The transitions between some songs are imperceptible; notably ‘Boosted’ and ‘Hard Martha’, both exhibiting celestial and fuzzy atmospheres that take the listener into new and exciting territories. Letherette have a notable talent incorporating elements of Hip-Hop, House and Techno to their productions, making for an album rich with influences.

With their debut LP, the duo continue to mine moods explored in their Featurette EP. That’s not to say this sounds samey, here the pair take the listener confidently through beautifully constructed melancholic moments like on ‘Gas Stations and Restaurants’ where a slight off beat melody and a resonating female voice engulf the listener in Letherette’s fine take on vulnerability. With their self-titled album, Letherette have put together a distinct palette of rich sounds and textures that slowly come alive the more you sink your head into the tracks, including plenty of memorable moments that will leave a broad smile on your face.