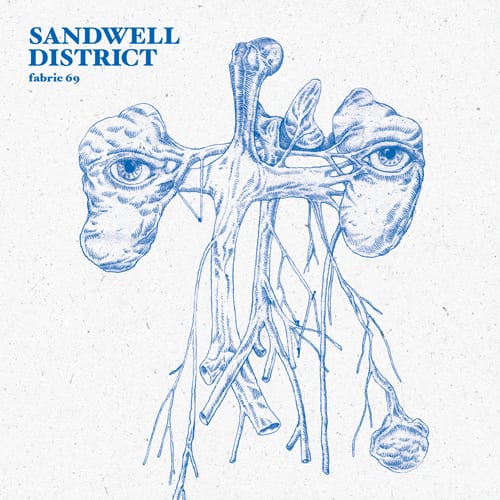 Sandwell District just don’t know how to do things by half measures, which is just as well, seeing as how in the current techno climate, hardball aggression appears to be the name of the game. What with the nascent brands of industrial analogue techno (Karenn, British Murder Boys, Raime) and technoise (Container, Cuticle) that have been slowly emerging from the darkest crevices of Berlin and London, the realms of post-punk, noise, and techno have become irrevocably meshed, the cold, clinical precision of one forming comfortable bedfellows with the rusted hissing of another. It’s a magical combination.

Sandwell’s entry into the long-running Fabric series marks their first official release since their seminal Feed-Forward in 2010. Featuring a number of original slices and remixes from Sandwell members past and present; the mix (compiled by Regis and Function) picks up where they left off three years ago. As ever with these things and especially with techno, the secret lies in the subtlety. Small fragments here and there that minimally build up and slowly release. It’s patient, intoxicating and hypnotic.

The mix itself was compiled mainly by Function following his superb long play Incubation, with tit bits offered up by Regis throughout the creative process. If comparisons were to be made, then it wouldn’t be unfair to say that the Ostgut Ton stable looms large over Fabric 69, in particular Ben Klock’s recent Fabric 66. But whilst Klock’s contribution was more sleek and rave-driven, Sandwell’s mix is more subdued and happy to linger in the shadows, albeit menacingly. It throbs to and fro, incessantly crackling, and threatening to splurge into life at any given moment.

The first crescendo arrives in the form of Fiedel’s ‘Andreas’ and Mary Velo’s ‘Detune’ before quickly re-submerging itself and re-instating that shrouded sense of foreboding. The second wave of attack comes through Markus Suckut’s ‘Hunt’ and Untold’s ‘Motion the Dance’ before the arrival of perhaps the mix’s standout track, Regis’ own remix of ‘Spock’ by VCMG. Having said this, It doesn’t feel proper to talk about tracks in isolation, especially in the context of Fabric 69, such is the singular importance of each track’s atmospherics in creating the overall mood piece. Even with the inclusion of big guns like Laurent Garnier, Carl Craig, Plastikman and Merk Ernestus alongside young bucks like Raime, Vatican Shadow and Factory Floor, the mix feels remarkably well balanced and seamlessly orchestrated.

Function has stated that the purpose with Fabric 69 was in “encapsulating an era and putting it to rest”, which seems at odds with how masterfully, or perhaps coincidentally, it defines the current zeitgeist in techno. Perhaps what we can draw from that is how despite the ever-evolving sonic boundaries of techno, the prescient blueprint that was laid down all those years ago by the Sandwell collective still bears a strong relevance to the current crop of young pretenders tearing up the scene. Ever the outpost of high quality, uncompromising techno, the old dogs have once again proved that they still know what’s up.