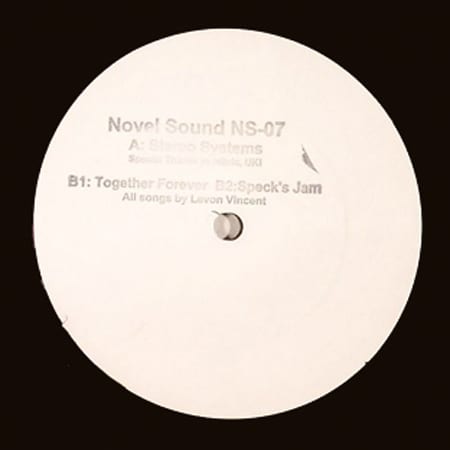 There has always been a thin veil of mystery that has been perpetually shrouded over Levon Vincent. The quintessential DJ’s DJ, the chin stroking appreciation that greets his tracks with such names as ‘Invisible Bitchslap’ and ‘Woman Is The Devil’ has slowly but surely been eking its way into the UK music scene for the past couple of years, culminating in his series-defining entry into the Fabric mix series.

The mix itself, an eclectic showcase of all that is good with the New York dance scene, featured several of his own productions, one snippet of which has made its way in its fully realized form onto a 12” release now with the help of two additional tracks for company. As with any Vincent release, this has been gleefully awaited and pored over by anyone worth their sophisticated salt in electronic music circles. And as if to further emphasize such high brow fanfare, this 12” comes courtesy of his own Novel Sound label, known for only releasing on vinyl. Well would you expect any less?

The titular ‘Stereo Systems’ that was first heard on Fabric 63 kicks proceedings off in hypnotic fashion. Vincent has built a reputation for producing precise, clean yet effective house and techno productions and this track’s intricate nature comes as no surprise, if a little on the crystallized side without much development over its ten minute duration. Unwilling to bow down to any cheap thrills, Vincent’s demand for complete attention from the listener encourages us to absorb every sonic detail. Every fractured snare, every shimmering hat.

‘Together Forever’ is easily the most abrasive tracks of the three on offer. Whilst approached at a different angle, the Vincent hallmarks are still indelibly present. The magnetic subtlety, glassy kicks that sound simultaneously fragile and fierce, with accompanying howls of reverb and delays make it an intoxicating and throbbing experience, but also one that has a habit of drawing you back in. It’s unforgiving production that keeps on giving, albeit in small, hard-to-find forms. And all the more rewarding for it.

The bouncy ‘Speck’s Jam’ is probably the most immediately accessible track here, but without substituting quality for familiar house tropes. Sure, we have the sugary bass line that will cause havoc in many a dancefloor, but it is still a lesson in less being more, pertinently in an age where we find the tiresome use of pitch shifted vocals as a means of engaging dancers. Vincent has no need or time for such gimmicks; he has faith in his strength for arranging percussion alone. And what a strength.