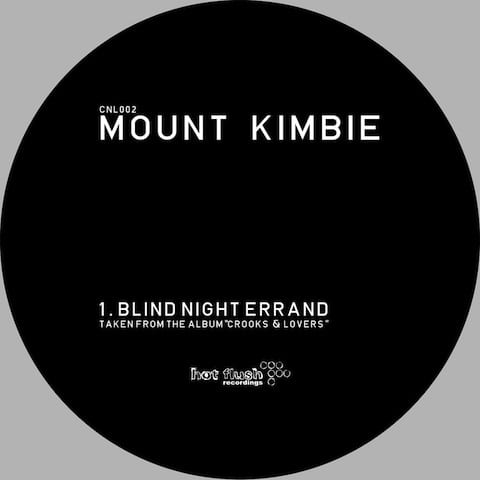 Fresh of the boat at the Hot Flush camp is a follow up from Mount Kimbie’s well received ‘Crooks and Lovers’ album. A 4 track 12” EP featuring  ‘Blind Night Errand’ & ‘Before I Move off’ taken from the album, a new mix of ‘William’ by Dayglo, and a live version of ‘Maybes’ recorded at Berghain club in Berlin. Mount Kimbie is the work of friends Dominic Maker and Kai Campos after meeting in London 5 years ago.

“Surroundings are a major influence on the sounds we’ve got” is a fair comment from Kai, as Kimbie’s music feels heavily atmospheric whilst retaining rhythmic and melodic content through peculiar soundscapes. Although a Dubstep influence can be heard in Mount Kimble’s music they, along with label boss Scuba, actively sought to go leftfield of a genre with structural limitations.

‘Blind Night Errand’ consists of deep dubby pulses and static-like glitch effects, supported by a tonal female voice. As the track develops, automated filter envelopes gracefully zap in and out, keeping the listener in a state of suspense, then release.

‘Before I Move’ builds more progressively with arpeggiated 8-bit sounds layered over guitar & sitar samples, driven by the kick drum. Carefully placed, cut up vocals and a down beat hand clap take your mind to a playful head-space.

Dayglo’s remix of ‘William’ is a heavily percussive affair produced around 175 Bpm, although full of textural content it remains of a relatively minimal vibe. ‘Maybes’ speaks for itself. An epic, almost cinematic intro, reminding of Joy Orbison’s ‘Hyph Mngo’, drops into tin can style percussive hits and heavily delayed and layered vocals

As a whole this is a beautiful collection of tracks, and a good example of where Mount Kimbie stand with their music at this point in time.