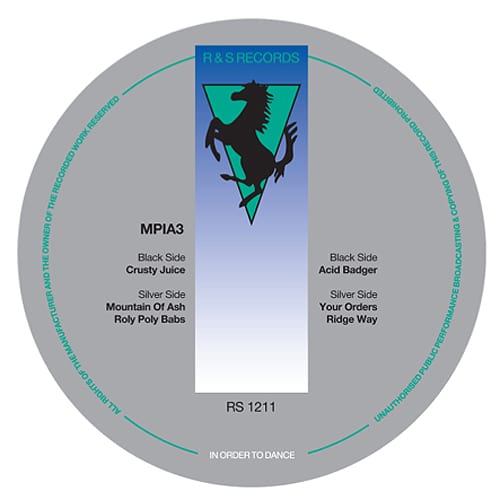 If any genre has really come (back) to the fore in 2012, it’s undoubtedly Techno. Dancefloors are becoming increasingly dominated by bruising shades of industrial sounds, and MPIA3 closes out the year on R&S by offering up a dangerous and largely successful double-pack of venomous Acid Techno. You may be more familiar with Tom Russell as Perc Trax’s Truss, but his MPIA3 project is funkier and more than a little Electro-tinged, a breath of fresh air in a scene that’s perhaps a little too fond of a fixed set of sounds.

The raw, industrial noises of Your Orders are generally served up on a similar sonic plate, but MPIA3 does more than enough to keep the ADHD-addled listener interested. Opener Crusty Juice hits hard for an introduction but eventually refuses to really go anywhere, and the same sounds are to be used to much more impressive effect later in the release. A powerful bassline dominates the more successful second cut Mountain Of Ash, becoming more erratic and ragged as the tune wears on. The pacing snares add up to a brooding acid roller that’s restrained without ever losing any of its force.

By this point, you’ll be used to the distorted 909 kicks and 303 squiggles, and Roly Poly Babs divorces itself from the 4/4 formula. That same venomous kick takes the lead over glistening synths that lend an urgency to the soundfield that results in something pleasingly analogue without ever seeming tired. The title track is another punchy and energetic turn, with snapping percussive touches and a clipped vocal, but both of these tracks feel somewhat like tools compared to the EP’s two largest tunes.

The first real stunner here is the unreasonably massive Acid Badger, an unstoppable pitch-bending acid odyssey that’s sure to light a fire under the darkest Techno dancefloors, an indisputable killer. But MPIA3 doesn’t stop there, offering one more moment of brilliance in the brief closer Ridge Way, a cut that rides faster with bruising kicks and a fantastic snare / hi-hat combo cutting into the 303s and keeping time, martialling all that madness. These two tracks make Your Orders worth the asking price alone, an astonishingly powerful set of take-no-prisoners Acid Techno that offers a continuous punch  and occasional moments of brilliance.