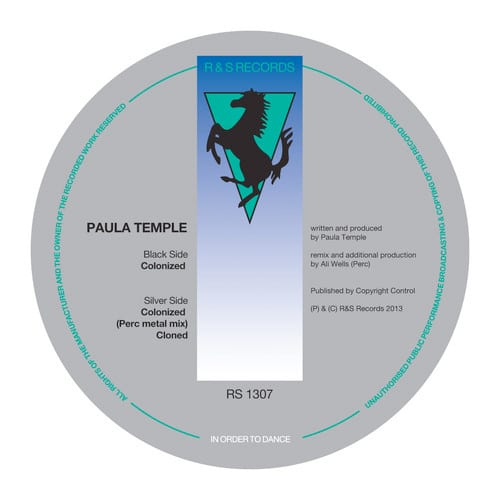 Aside from her work in the realms of DJing and production, Paula Temple has done notable work in the field of music technology and equipment. She is the co-developer of the MXF8 midi-controller, which was one of the first available to use for live performances after the millennium. As an artist, she released a 12” on the label Materials in 2002, has some albums under the Fragile X alias, and another EP as Spank Protest. Her Colonized EP is the first under her real name after eleven years; it makes her the first female solo artist in R&S’ long history, and after several listens, it will probably urge you to discover the rest of her discography.

The title theme opens the EP, and after fifteen seconds all hell breaks loose. The constantly recurring noise patterns recalls the sweaty masculinity of industrial, while the tempo is really tight, driven by stern drums. What makes this track really interesting is that it finds some peace about halfway, where a warm synth line begins to emerge; but soon brutality overcomes the atmosphere, and the closure is everything but peaceful. Perc’s Metal Mix comes next: he puts more effort into crafting an identifiable bass, introducing his trademark sound well. The remix is pretty straightforward, and transforms the track into a standard, yet flawless and highly recommendable DJ tool. There is also a ‘Bubble Mix‘ by Perc in the release’s digital content, featuring some frankly haunting chords.

The last piece on the wax is ‘Cloned‘, an abstract breakbeat manifestation, bringing back memories from the second half of the good ol’ ‘90s. The synths are dominating; their first appearance after the opening sequence suspecting the slow arrival of something wicked. Darkness is all over the track, expressed properly by a chopped, intermittent female vocal. In the EP’s digital bonuses, Temple includes one more original work: ‘Decolonization‘ is the hardest to decipher. It builds around the idea of placing samples oddly. It is like solving equations, arranging and simplifying the elements. The chant-like shards towards the end unfolds a mystical layer; combining it with mathematical approach, the result is like reading a Neal Stephenson novel.