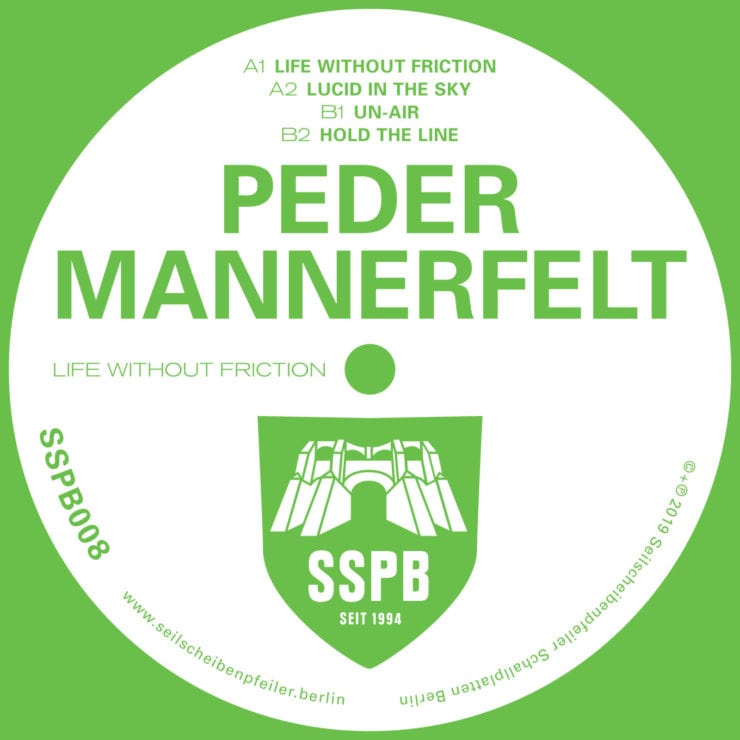 Peder Mannerfelt is back with a solid four-tracker on Monkeytown sub-label Seilscheibenpfeiler, a strong follow up to last year’s excellent ‘Daily Routine‘ LP as well as his recent digital declaration “I Stand Up and Say Toxic Masculinity Has Got to Go Away.”

On his latest 12” Mannerfelt continues to explore the weirder side of techno, but without sacrificing enjoyability for purely experimental ends. “Life Without Friction” starts things off and is arguably the most club friendly of the four tracks. The title is an obvious misnomer as there is no shortage of friction here.

Tensions start high and only ratchet up from there. This is the kind of track that might come on at that pivotal moment midway through the function when things suddenly kick into a higher gear, then it’s smooth sailing from there until the lights inevitably flick back on.

“Lucid in the Sky” slows things down a bit. Discordant bass hits stutter through haunting pads eventually devolving into mechanical drones and FM pings. I’m reminded of that article about the security robot that drowned in the office fountain, its exhaust fan sputtering half-submerged.

Things pick back up nicely with “Un-air“. Spastic scratches generate some mild turbulence shortly after take-off, but the chords hit just as we reach a comfortable cruising altitude somewhere over Detroit.

The final track “Hold the Line” opens with a nice filtery chord sample that has an almost DJ Sneak or early Daft Punk quality, an unexpectedly euphoric turn given everything that’s preceded it. A few minutes in, however, this plastic shell cracks away allowing the sludgy material it contained to ooze out and engulf everything.

The chord stabs creep in and out as sub-frequencies gesticulate, disparate elements held together by a membrane of delay and reverb over a frame of skeletal hi-hats. Everything ultimately snaps together into a locked loop that slowly echoes out, an appropriate ending to a compelling release on par with anything Mannerfelt has done to date.

‘Life Without Friction’ EP is out 15 March 2019 via Seilscheibenpfeiler. Order a copy now on Bandcamp.