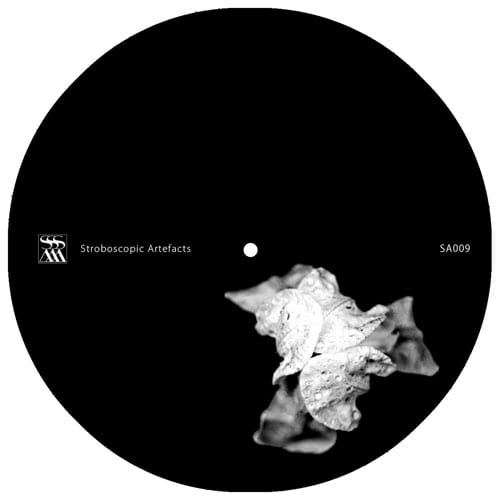 Lucy’s Stroboscopic Artefacts again provide a home for producers more off the journalistic radar than on it, with Juan Pablo Pfirter having appeared in 2006 on on the little-known MindTrip label from his native Argentina before coming to the attention of Par Grindvik and Damon Wild for Stockholm LTD and Synewave respectively, leading towards a ‘breakthrough’ release on CLR; the duo of Dadub, meanwhile, made their name through highly-regarded mastering expertise and a sprinkling of choice edits. No matter their profile, though, because they’ve turned out a release that further confirms Stroboscopic Artefacts as the most vital imprint in contemporary techno.

Pfirter’s lead cut ‘Universe’ is perhaps the best aural substitute known for being strapped to the roof of a speeding train while high on unadulterated methamphetamine. Built around a kickdrum more than sufficient to punish any soundsystem, it is nevertheless swamped in a cloak of its own reverberant bass texture, yielding an overall propulsive effect likely to shift a plate boundary or two if played a mere fraction too loudly. Add some sizzing, razor sharp hihats, distorted percussive square wave stabs, a rotating organ drone and some cleverly-utilised white noise FX to flesh out a beautifully-hypnotic 10 minute arrangement, and you’re left with a fearful sonic monolith guaranteed to get a reaction. Terror.

On the flip, Dadub opts for a similarly cavernous mood on ‘Metropolis’ but eschews the 4/4 kick in favour of a syncopated, post-dubstep style kickdrum structure with uneven velocity accents providing a relentless sense of drive. Added to this foundation are spacious offbeat hi-hats and metronomic, echoing atonal stab FX weaving through intermittent blasts of claustrophobic, granular synthetic texture, in and around a well-judged atmospheric breakdown midway through. At over 11 minutes it is, like Pfirter’s cut, an unfeasibly powerful slab of sound. Furthermore – although perhaps unsurprisingly given Dadub’s stock in trade – the engineering across both tracks is likely to set something of a new benchmark within the genre. Finally, Edit Select deliver a reinterpretation of each cut as a digital only bonus, pushing both into deeper and murkier, dub-inflected territory, thus making them suitable for sets well outside of peaktime.