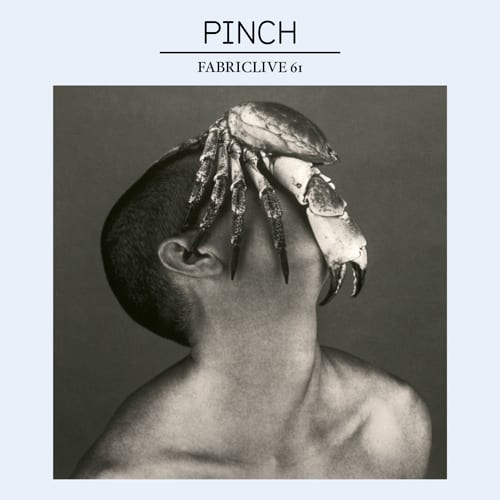 Some would say the 61st installment of Fabriclive is long overdue. Rob Ellis, aka Pinch, has been one of the figureheads of the dubstep genre ever since it’s humble beginnings. His Tectonic imprint has released some of the most respected material to come out of the genre, while his own sound is noticeably unique among his peers. Pinch’s status as a talisman made it even more lucrative when he began deviating from the norm, incorporating house and techno into his live sets and releases. Much of Fabriclive 61 deals with this new-found shift in perspective.

Metallic house and techno orientations occupy the beginning of the mix, US producer Distal opening and closing with ‘Venom’. It seems to echo Pinch’s place at the moment – 2010’s ‘Croydon House’ signified a dramatic turn away from the style that made his name (the release on Swamp81 rather than on his own Tectonic imprint also telling), and the 130bpm leanings of the opening quarter reflect upon this shift potently. We have to wait for Pinch’s remix of ‘Love Like’ by Henry & Louis to get the bludgeoning subs that will come to characterize much of the mix.

Unlike previous entries such as Four Tet’s , Pinch never builds to a defining moment or arrives at a particular peak. Fabriclive 61 ebbs and flows, instantly creating and then maintaining an intensity that manifests itself through an excellent selection of tracks and some increasingly interesting mixing techniques. With many dubstep DJ’s shifting perspective in both tempo and scope, Pinch’s mix provides a snapshot into the ever-changing dynamics of the genre.

The aesthetic of the mix itself is perhaps its most distinct attribute. Pinch’s increasingly greyscale outlook defines it. It’s cold and uncompromising, but utterly infectious. There are some moments of lightness that find a way through the pressure, and are made ever the more impressive because of it.

‘In Dreams’ gives the mix and the listener some room to breathe, earning some respite from the pummeling force of ‘Natural Law’ and ‘Rooms Within A Room’. Roly Porter’s beatless beauty ‘Hessra’ is also represented, and is a prominent example of the shrewd choices made by Pinch. The ever-present acid grenade ‘Swims’ also rears it’s exhausted head, but this may be one of the last times we hear it on a release of this scale. The blending of ‘Swim’s into DJ G’s ‘Uncertain’, which then leads into ‘Hessra’ and finally punctuating into the war-path collaboration ‘Acid Reign’ provides the mix with one it’s most intense and satisfying moments.

Indeed, it’s the density of Fabriclive 61 that is most striking; for all the talk of dubstep heading into other places, it’s surly characteristics are more than represented here. The suffocating concentration is also apparent through seemingly unconventional means, such as Roska’s forthcoming bouncer 480BC, and Addison Groove’s ‘This Is It VIP’. The mix goes full circle, the warped sounds of Om Unit and Illum Sphere taking us back to where we started, both in terms of the mix and it’s reflection of the scene today.

Whether or not Pinch’s Fabric installment is a prophecy remains to be seen. The genre’s been in limbo recently; strewn in different directions simultaneously and with its credibility under serious threat. Pinch consistently and expertly straddles a line that many have been leaning towards over the past few months, the result of which speaks for itself. Fabriclive 61 presents us with another direction, one that, on current form, seems the most appealing.