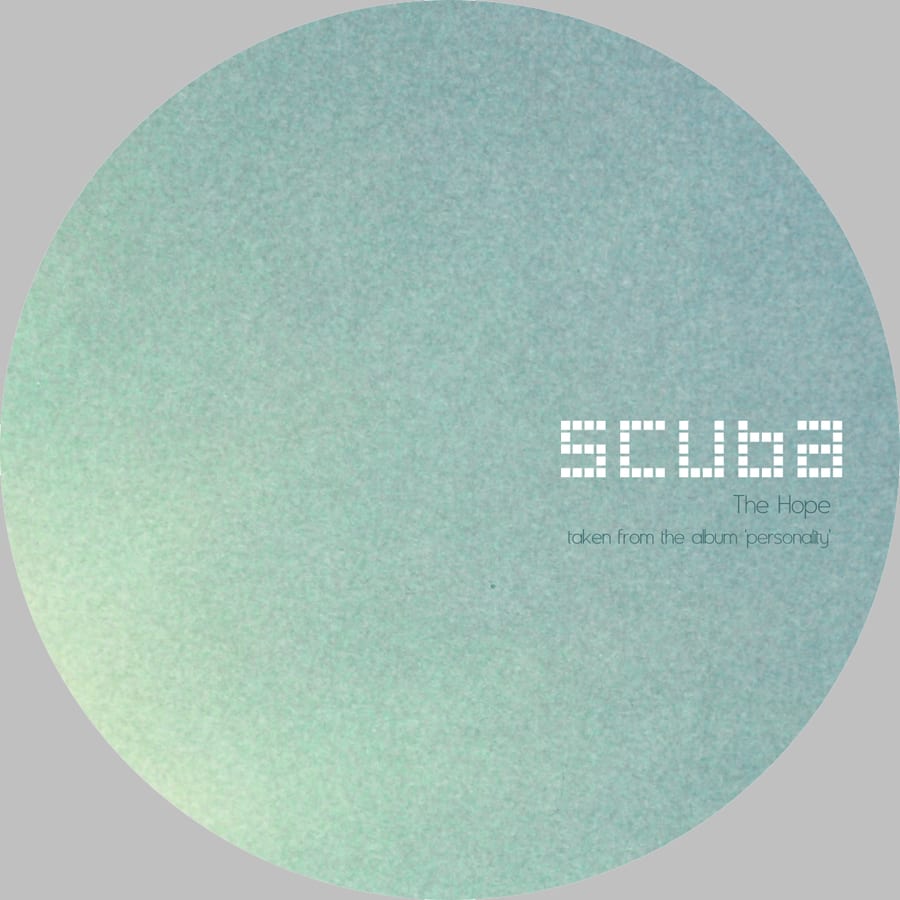 The past year and a half has proved an intriguing transitory stage in the career of Berlin-based producer and Hotflush label head Scuba (aka Paul Rose). Whereas 2010 saw the release of his second LP, the heavily-swung excursions of ‘Triangulation’, 2011 saw Scuba’s sound diverge in a new direction that had been beckoning for quite a while; as he dove headfirst into the type of uncharted waters usually reserved for his SCB alias, and reinforced this angle with adventurous strains of dancefloor-pop hysteria.

With Scuba’s third LP, ‘Personality’, just around the corner, the test press of its first single, ‘The Hope’, has already crept into stores. Although Rose clearly enjoyed last year’s dalliance with summery major chords, ‘The Hope’ confirms there’s still a duplicitous dark side to Scuba’s recent expedition into more accessible territory.

‘The Hope’ cuts straight to the chase; quickly building up to a wicked, hard-working bassline that locks in perfectly with a monolithic techno stomp and reams of sawn-off ‘Mentasm’ ruckus. Scuba’s trademark wet fills unlock each successive phrase, as every row of 16 bars hits harder and fiercer than before. It climbs ferociously to dizzying, paranoid heights, before flourishing into an excellent panorama of Foul Play-esque ‘ardkore stabs. These chords then dissipate quickly amidst a downpour of rinsed-out filter action, and the tune rolls on for one last stand. Commentary comes courtesy of a suitably sleazy rave instigator, whose clear purpose is to play devil’s advocate for Rose’s ever-growing audience on the dancefloor.

Whilst the flipside, ‘Flash Addict’, won’t be appearing on ‘Personality’, it still serves well as a late night DJ tool. Opening with a sharper fragment of that ‘Adrenalin’ synth, a marbled arpeggio soon sprawls all over a taut, driving rhythm. Rolling toms accentuate these anxious, wide-eyed vibes, as a demented Juno unravels to and fro, leaving a wash of chords to eventually soak through the densely focused mix.

Much like ‘Adrenalin’, ‘Never’ and ‘Everywhere’, ‘The Hope’ packs all the necessary potential to crossover into mainstream clubbing consciousness; especially through the record bags of big-time DJs who slew massive, ‘everyman’ audiences. At just over four minutes long, Scuba’s airplay aspirations are also more than apparent, despite the fact that it’s perhaps the most aggressive tune he’s ever made. In a perfect world it could even chart – such is the strength of its menacingly infectious construction.

With ‘Personality’ set for release on February 27th, ‘The Hope’ is a salacious tease of what’s to come.