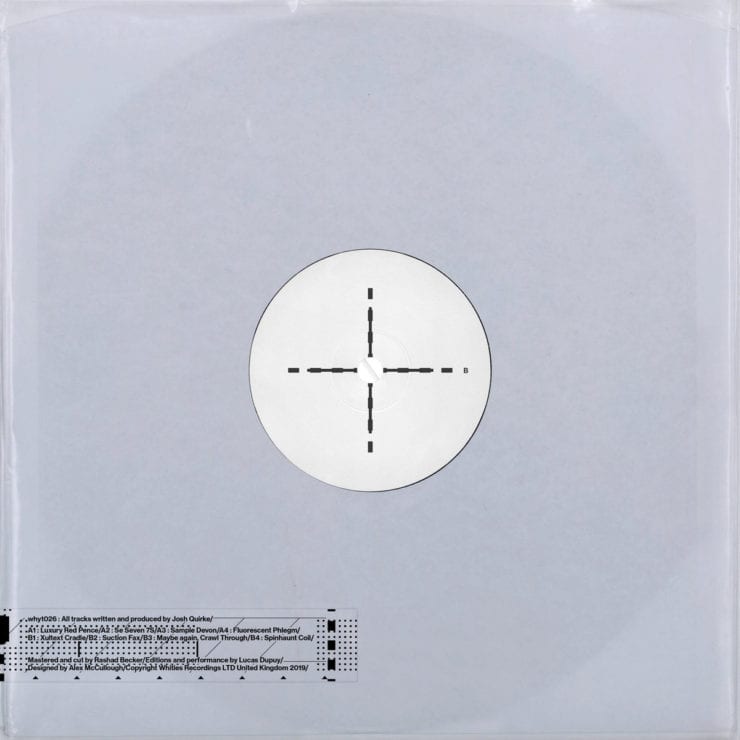 Aside from selling records, one of the finest measures of a label’s success is the development of a sound. Guided by the impeccable ear of label boss Nic Tasker, the Whities sound is impossibly diverse, and the fact that every release slots so seamlessly into their ever-expanding canon is testament to Tasker’s deft touch.

‘Steal A Golden Hail‘ continues Whities jaw-dropping run of sold-out releases, and Quirke is precisely the kind of artist that you love to see with a sold-out record. Whilst Whities revels in divergence, Quirke’s path has been one of gradual refinements. Since the pair crossed paths in 2014 with ‘Acid Beth‘ on Young Turks, a distinct feature of the producers next two extended players for Tasker’s, then-nascent imprint Whities, was the steady integration of thoughtful textures into his signature sonic palette.

Whities completists and followers of Quirke will be relieved to find that the producer’s first full-length album marks his arrival at precisely the sound that he has been consistently mining for the last five years. And given the quality of his previous output, it should come as no surprise that this vein is both rich and deep.

Quirke likes us to squint at his music. His productions take us on journeys to places where texture is more easily identifiable than shape or colour, and as hard as we might try. He leaves us scrying for answers to unfinished questions. On album opener ‘Luxury Red Pence‘, it is unclear if we’re being wrest from the cramped folds of a fitful dream or drawn unwittingly into the sinkhole of Quirke’s subconscious à la Get Out.

The A-side swings like a pendulum between sci-fi and classical fantasy. Fidgety futuristic IDM gathers pace as it surges through the nadir of reality, lifting us up on the full junglist power of ‘Sample Devon‘, only to let us fall back down into the disquieting waters of ‘Fluorescent Phlegm‘ and watch us sink. Here, Quirke is at his most expressive and ‘Fluorescent Phlegm‘ is the crux on which the album’s narrative flips.

Maudlin piano is matched with the uneasy industrial machinations of hospital ventilators, while the clunking manoeuvres of slide projectors cast gauzy vignettes of all that came before. Only at the very moment that darkness closes in does Quirke finally acquiesce, allowing one fleeting glimpse of the hypnotist’s hand. It is his masterful production – disguised as the dint of chance – that recasts that same contemplative chug into a snarling diesel engine, and with that, the pneumatic malaise of the A-side goes roaring into the B-side.

“Are you still there?”

“Yeah so she said the body is the mind’s measuring instrument or something – the mind renders information registered on its sensory surface, combines it with old info from the same source and keeps the whole accumulated stock poised to guide action”

Taken out of context, the cryptic liner notes read like a strangers shorthand for which we will never hold the cypher. Yet, as ‘Xultext Cradle‘, ‘Suction Fax‘, and ‘Maybe Again, Crawl Through‘ spill out of the flip side, there is the undeniable feeling that we have been here before. Everything is the same, but implacably different.

The mind renders information registered on its sensory surface, combines it with old info from the same source…

It is an exercise in déjà vu. A kind of synesthetic rendering of a familiar script that guides us through the white noise of re-entry and prepares us for a completely different ending in this incarnation. And on the final track, the payoff is enormous. A thick-cut slab of galactic jungle, it soars on ambient synth and in stark contrast to the A-side, envelops you in the opioid warmth of euphoria. ‘Spinhaunt Coil‘ is the kind of track that you feel warrants a tablet of wax to contain its grooves and a fitting end to an exceptional record.

Quirke gives you the feeling that if he wanted to, he could keep this album going forever, spooling off into endless iterations with alternate endings as he tempts us through his infinite labyrinth. As it is, one story is more than enough for this album to excel.

When you drop the needle on ‘Steal A Golden Hail‘, you flip the hourglass on an absolutely dimension-shattering trip. The album grants us an earful of the churning chaos that lies beneath life’s flimsy veil of normalcy. At times it is overwhelming, but by the end of the album, the only thing that remains is the desire to hear it again, and again.

‘Steal A Golden Hail’ is scheduled for release via Whities on 6 December 2019. Order a copy from Bandcamp.

Discover more about Quirke and Whities on Inverted Audio.