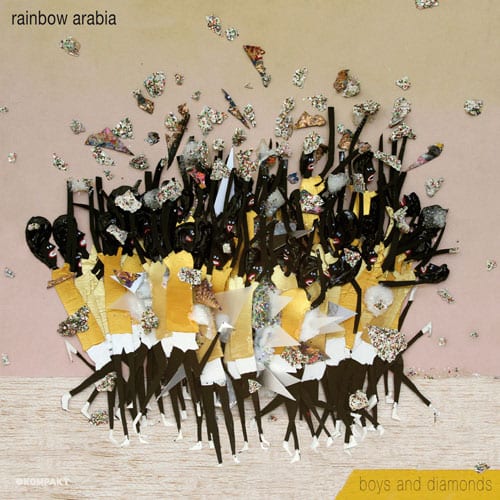 Rainbow Arabia specialise in broken journeys with global designs, tribal sonic snapshots eked out in a Californian basement studio. Whilst some might chastise the husband-wife duo for taking a relative eternity to produce their debut, their progression is undeniable.

It’s easy to see why Kompakt welcomed them aboard their roster. The Cologne label’s attitude towards techno has always been about resisting categorization and celebrating the evolutionary energy of the genre. After putting out Walls’ cryptic guitar-dance late last year, this is the next piece of the Pop Ambient jigsaw. 2011 is getting twisted all out of shape. Purists should wait for Matías Aguayo, his forthcoming 12” will cleanse the palette along with numerous releases on Cómeme.

Boys and Diamonds whirs into life in mesmeric fashion, the title track effortlessly shrugging off the trail blazed by previous calling cards, Holiday in Congo and Omar K. A spacious upgrade in production standards lends a majestic tone to proceedings. The percussion skitters with insistent panache, counterbalanced by synthesizers that shimmer with burst tropical melancholy.

The single, Without You, is a gauzy pop lament that grows inexorably. Whilst the original exudes reflective astral warmth, the remix from Nguzunguzu withdraws the percussive elements, keeping things up-tempo and underground.

Throughout the record, Tiffany Preston’s vocal flutters in and out of focus, seamlessly chameleonic in its application to the tracks. The menacing Hai sees it sparkle, floating imperiously in and out of lush curtains of vocoder fuzz, whilst Sayer pushes it through a mangle of pitch-shifted splices and drawn-out backgrounds.  The synthesis between the duo is to be much admired on Mechanical, a sprawling nocturnal epic.

The shadow of Karin Dreijer Andersson, circa Deep Cuts, looms large, and whilst Boys and Diamonds supersedes that album, The Knife remain way out in front when it comes revolutionary electro pop. Whilst clearly talented, Rainbow Arabia are yet to impose a definitive identity. When that happens, expect things to get stratospheric.