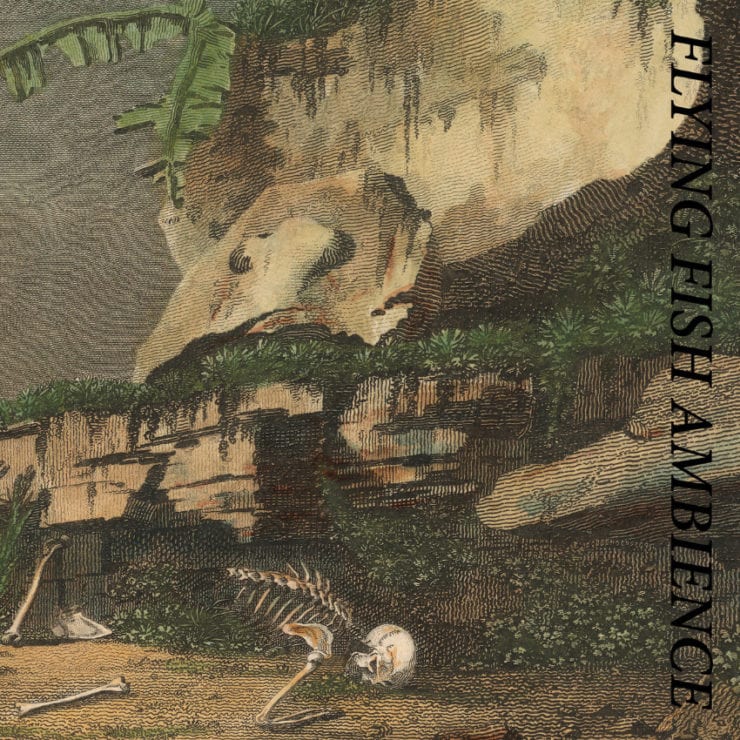 As Rainforest Spiritual Enslavement (RSE) , the pairing of Dominic Fernow and Low Jack have produced some of the most essential ambient music in recent years. The latest missive from the jungle, ‘Flying Fish Ambience‘, shows no deviation from the path.

It’s somewhat degrading to define the music as ‘ambient’: although it clearly aligns with many of the core principles of the genre, there’s a weight and a depth to RSE that goes many steps beyond the surface-level approach of simply creating “nice sounds”.

This is perhaps drawn from Fernow and Low Jack’s main musical output, with Fernow’s Vatican Shadow and Prurient projects being a cornerstone of hard-hitting electronic music for many years, and Low Jack furnishing the world with sonically nuanced and diverse electronic music. With both, the approach to sound sets them apart from the standard fare.

Demonstrating a spectrum of sound which can rarely be fully appreciated away from high-grade speakers at punishing volumes, ‘Flying Fish Ambience‘ — and indeed the entirety of RSE’s catalogue — displays the same crushing depths and glimmering highs which we’ve become accustomed to across the likes of ‘Green Graves‘, ‘Black Ambient Magic‘ and ‘Panama Canal Left-Hand Path‘.

In full honesty, ‘Flying Fish Ambience‘ is not a collection of new and inventive sounds from the pair, but a continued exploration of the narrow constraints of their sound. It’s rare that a comment of this kind is not a mark of criticism, but one of praise: while each RSE album often bears great similarity to the last, there’s still a rapturous magic about each release that stays feelings of boredom.

This is partly due to the deeply repetitive nature of the music itself. Weaving the passage of time into their compositions, RSE delve into the sonic hypnotism which often remains at the core of techno, transferring it into the realm of ambient music with an efficacy rarely matched by their few peers — demonstrated impeccably with ‘Snake Head Cemetery”s plodding, lazy drum beats and the yawning chasms of subbass.

It’s this atmosphere that forms the spine of RSE: raindrops falling, singularly into pools or en-masse against great leaves, paint the backdrop alongside occasional thunder-strikes, as the minimal percussion beats against the air. Just as each jungle bears resemblance to that in other continents, yet also remains entirely unique, each RSE album, although composed of the same organic materials, is unlike the rest.

What perhaps sets ‘Flying Fish Ambience‘ apart from previous releases is the forays into dub-techno: ‘Rains Coming Down‘, featuring celebrated techno producer Shifted as Pacific Blue, sees the merging of the RSE sound with a steady and somewhat quantized beat in a move doubtlessly welcome to many DJ’s: RSE have produced material parallel to and usable in dance music sets, notably on ‘Green Graves‘, but this cut delves even deeper, without marring the impeccable atmosphere painstakingly created over the course of many albums.

To those who are new to the project, we recommend hunting for your favourite release, as each displays a different glimmering hue, but ‘Flying Fish Ambience‘ certainly sits toward the top of the pile, offering an exemplary take on the darkly psychedelic dread, the hallmark of a project rivalled by few others.

‘Flying Fish Ambience’ is out now via Hospital Productions. Order a copy from Bandcamp.