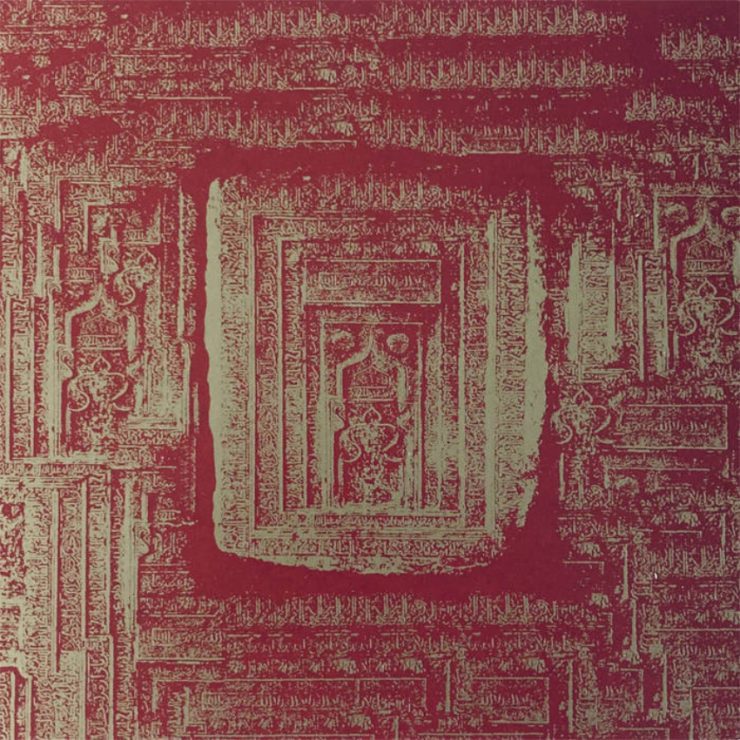 Saint Abdullah have consistently been carving their own unique path in the world of contemporary electronic music for a few years now. After the success of their dominating album for Psychic Liberation, ‘In God’s Image‘, the duo mark their return with ‘To Live A La West‘, a joint CD release through Important Records, and a separate, but conjoined, cassette edition for sister label Cassauna.

For the uninitiated, formed by two brothers Saint Abdullah are Iranian in heritage but were raised in the West after their family relocated. Their cultural heritage — and the traumatic experience of adapting as a young adult to living in a society that frequently demonises people of their cultural heritage — has long informed their music, from their early album on the sadly defunct Portland label Boomarm Nation, to their work on Purple Tape Pedigree and the previously mentioned release on Psychic Liberation.

Each album shows a different perspective of this journey, ranging from fury to a settled discomfort, to being made to feel alien in your adopted home. ‘To Live A La West‘ falls closer to this latter category, with the music forming an audio diary of what it’s like to grow up as a child in the west, of becoming accustomed to a vastly different way of life, and learning to fit in as a youth. In their own words, “To live in the West doesn’t necessarily mean to be Western. That is a choice. As kids, it felt a necessity to be like the western kids.”

Beyond their ever-changing scope, their music itself adapts: ‘In God’s Image‘ was unadulterated, raw blasts of crushed instruments scraping out rough shapes using sonic damage as a tool. This album is different, with fine harmonies returning to the palette alongside microtonal warbling’s of fine-tuned synths, generating, in combination, an eerie sense of separation or isolation.

B-side opener ‘Baseball Cleats Make Superstars‘ carries this energy, the pulse of the hi-tempo drum kit sliding away into the background under the solemn flute lead. ‘Hejab in High School‘ takes a near-piercing oscillator, transformed into a mimicry of certain Middle Eastern wind instruments, and leaves it to freely tremulate atop warm yet foreboding ambience, before ‘Even You‘ slams the listener back in their seat under a steamrolling barrage of bass.

In many ways, ‘To Live A La West‘ sits closer to free jazz than your typical electronic album’s remit, a fact supported by the pair, who describe the CD version on Imprec as drawing heavily on their love for late saxophonist and Fourth World music pioneer Jon Hassell. Breezy wind instruments are found, in various forms, across both albums, sometimes faintly and sometimes at the forefront of attention.

These instruments make up the bulk of Saint Abdullah’s newer adventures in sound, and sit in stark opposition to the rusted metallic gleam from ‘In God’s Image‘. Through the organic instruments their music adopts a personal and soulful veneer, through which musical rendering of deep and long-standing hurt shoots through, in moments equally of frailty and strength.

Like many modern political musicians, Saint Abdullah’s work is perhaps best understood by the diasporas whose emotions they seek to transcribe, but they also create work that is deeply moving to listen to, regardless of their story. Through albums like ‘To Live A La West‘, we can learn something of their tale through listening with open ears and an empathetic heart — which contributes greatly towards their music being so important to the modern electronic music community.

Musical voices like Saint Abdullah’s are not so rare in modern electronic music, but awareness of their work seems still to be shamefully low: with 4 albums under their belt (5, including the separate forms ‘To Live A La West‘ takes shape) on critically-acclaimed labels, their offerings to the world of music are long overdue the credit deserved. ‘To Live A La West‘, hopefully, will be the work to change that forever.

‘To Live A La West’ is out now. Order a CD copy via Important Records and cassette via Cassauna.