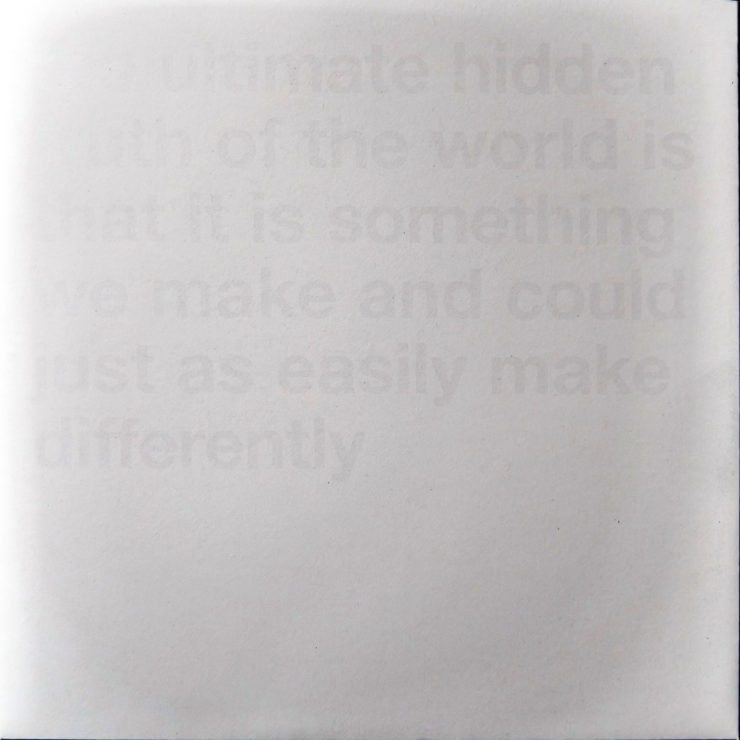 You’re too late. My own first awareness of the album – reading pressing delay updates from a few months ago – that was too late. Even as far back as February – the original shipping date for the release, – was too late.

‘2020‘ originally went on sale back in December 2020 and followed the typical format of one of the mysterious, skeletal detail packages that Giegling have run with in the past – no artists, no track list, no preview. While there is an argument to be had about blind purchasing vinyl – an expensive, luxury medium for music consumption, mainly aimed at those actively spinning out and about, or those 100% committed to the music they are buying – the consistent quality of Giegling and the relatively low entry price of €20 for a double EP, it was a faith purchase that was pretty easy to go all in on.

After near to six months of delays, transparent email communications and jovial community speculation, shipping notices began. Then came the artists and track listing, quickly followed by photographs of the packaging from those receiving their post – a 50/50 chance between the white or black variation, watermarked with the phrase “the ultimate hidden truth of the world is that it is something we make and could just as easily make differently” – before finally the first YouTube videos began to surface.

What makes the release special is an exercise in understanding the nature of a compilation. There are two important factors at play in order to get that lightning firmly in the bottle – your contributing artists need to individually be on top form, and the tracks need to be contextual when rubbing up against each other.

There are plenty of compilations out there which are good or great, where you find yourself gravitating to one or two highlights in favour of the rest as it wears in. That is where the bird’s eye view of a single artist pulling together an album has an advantage, having the macro control and knowing precisely where to nudge individual moments forwards or backwards in order to thread as a whole. Giegling, too, has this advantage, operating as a harmonious collective rather than a collection of individuals.

Arguably, the element of risk is less across seven tracks, still there is no weak link here. Trawl through YouTube and you’ll find many commenters declaring any one of them as “the highlight of the release”, mixed in between the car crash in waiting “how do you buy this?” queries. Listening through with distinct “album consumption” and “mix selector” perspectives, you will not find yourself wanting. ‘2020’ feels equally at home drifting out a Sonos in your front room, or actively in motion as you sequence it captivated in your headphones.

There is no better foot forward than map.ache ‘Where Do We Go From Here‘, managing to take a well worn vocal from Kings Of Tomorrow ‘Finally‘ and spinning it into optimistic, peak time dub-breaks. It is phenomenal, and will you have you throwing your bank details at the unscrupulously circa £100 listings on Discogs on that track alone.

As you recover from fainting, Leafar Legov allows you to regain some composure on ‘I Need You‘. It is sophisticated house music – a wandering bass line, velvet chords and a silken vocal pleading “I need you”. Gracing the label for the first time since her ‘Waves‘ release three years ago, Molly nails classic deep house on ‘All Good‘. In the 90s, deep house was often interchangeable with tech house, with the best tracks balancing dance floor drive with considered deepness. ‘All Good‘ has it all happening – it is punchy, rubbing the best of house, techno and dub elements together, each tugging a different string of appreciation at any one time.

New project from label owner Konstantin then closes the first vinyl, donning the mantle of The Ghostbusters on ‘A River A Tree A Rock‘. A tinny dub loop plays from a radio in another room, Giegling collaborator Otto Oscar Hernandez whispers over the top, sub-bass hums away before the “four-on-the-floor’ decides to grace us with its presence a good four minutes in, like every fabulous “late-to-the-party” guest.

Wipe your brow, the second slab begins with Rhadoo alias “Bim Bim” treating us to a brief eighteen minute workout in the familiar [a:rpia:r] style. Its elements drift like smoke – beats that have a drunken lurch, half-uttered throaty vocals, decomposing radio static, a hotel counter bell ringing somewhere in the distance, held chords that pass like a distant train, and manic effects that sound like they are having an existential crisis.

While that all sounds overwhelming, it has that [a:rpia:r] knack to have a metronome that never stops ticking. Somewhere in all the disorder, your circadian rhythm is absolutely anchored. Then, like being slapped in the face with a bag of ice, Cosmic Intelligence Agency ‘Transformers‘ is quite the counterpoint. You’re straight in – pots and pans banging, driving bass, a cosmic space battle dancing between your headphones, and a dry educational monologue wringed through a ring modulator.

A twenty second interlude – Free People ‘Free People‘ – separates these warped dancefloor moments from the head in the clouds finale, The Mountain People ‘La Colline‘. It is crisp, and uplifting, like a major key spin on emo-house classic Pachanga Boys ‘Time‘.

If this extended sequence of words has started to push your FOMO buttons, don’t worry – you can’t have a fear of missing out with something you already have missed out on. While Giegling represses are rare, they are not unheard of – with previous compilation ‘Mind Over Matter‘ resurfacing at the same time the listing for ‘2020‘ went live.

Should that be the case, let my tale be a cautionary one – experiencing it via the glorious medium of YouTube, never navigating your phone away from that screen lest the audio be broken and every knock in your pocket skipping tracks or pausing, is pretty sub-optimal. Be at the ready, and next time Giegling fires up the compilation engine, be ahead of the curve armed with a little dose of faith.

‘Giegling 2020’ is out now via Giegling. Listen to each track via the YouTube player below and try your luck at buying the compilation via Discogs.

A1. map.ache – Where Do We Go From Here
A2. Leafar Legov – I Need You
B1. Molly – All Good
B2. The Ghostbusters – A River A Tree A Rock
C. Bim Bim – Ceve
D1. Cosmic Intelligence Agency – Transformers
D2. Free People – Free People
D3. The Mountain People – La Colline