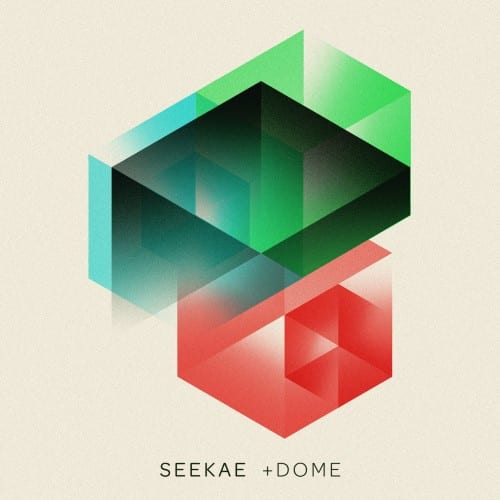 In the two and a half years since Sydney electronic trio Seekae dropped 2008’s most universally lauded debut, “The Sound of Trees Falling on People”, it seems much has changed for the group – not only in terms of their musical surroundings, but also through a newfound understanding of their own position amongst them all.

Whilst their first opus dreamt of the euphoria of 90’s Warp,  Dabrye and musique concréte, +Dome sees the group tap into a much wider palette – one involving tinges of house, jazz, techno, and the after effects of garage and dubstep. What makes +Dome so distinctive is its incremental interpretation of these flavours, seemingly achieved through the band’s unique isolation from such alienating scenes and descriptors.

Opening with the somewhat Radiohead-inspired ‘Go’, +Dome explores many contradictions – post-garage and guitars, jazz and sub-bass, rhythmic density and well-timed silences – confidently illustrating Seekae’s forward-thinking identity. The sublime ‘3’ bounces through crafty guitars, jaw-dropping micro-rhythms, and an infectious refrain, before soaring into John Hassells’ signature Baroque tonal trajectories. Album closer ‘You’ll’ is a stripped-back lullaby that blossoms separately from the ‘is-it-a-dance-is-it-a-live-band-ting’ tension which is ever-present throughout the record.

One of the most rewarding tunes here is ‘Reset Head’, a spatially melancholic progression, which, when coupled with a brilliant syllabic grab, floats between the saccharine glow of Mount Kimbie and the fragility of post-rock. However, the LP’s best tune is its eponymous number, an after-hours lover’s ballad, which twists a revolving vocal and resonating Rhodes over stunningly well-swung percussions and staggered live drumming.

There’s no shortage of potential singles on +Dome either. Prime radio cut ‘Gnor’ wades through mid-tempo contemplation, before quickly ascending into radiant feel-good vibes. Although slightly self-aware, ‘Blood Bank’ takes the crossover potential of Glasgow’s Lucky Me crew, and succinctly transports it into daytime radio territory.

In contrast, ‘Two’ is a much grander encapsulation of the four minute pop tune, moulding decayed ambience into a blushingly pretty garage riddim. ‘Mingus’ is another statement of intent, expanding upon the band’s wayward grooves, by stabilising them with an unconsciously Chain Reaction techno motif.

From the outset, +Dome depicts a far more ambitious vision of the future than any other Australian act has ever attempted, delivering a signature sound that is as accessible as it is sophisticated. As the stigmas of electronic music in this country have fallen by the wayside in recent times, a proposition like +Dome is now so digestible that it will act as the perfect gateway for many potential converts both at home and abroad.

Seekae’s latest creation is a certainty for end of year album honours – primarily due to its unrelenting differences. From its stylistic dexterity to its emotional intensity, +Dome is heavily layered. As such, +Dome is certainly Seekae’s most cohesive musical statement; held together so well by both its eccentricity and deceptive playfulness. It is also sure to garner international repute.

Put simply, +Dome is shadow-like in its surprising turns; opening up with each successive listen, with its schizophrenic nature surely to Seekae’s utmost advantage.