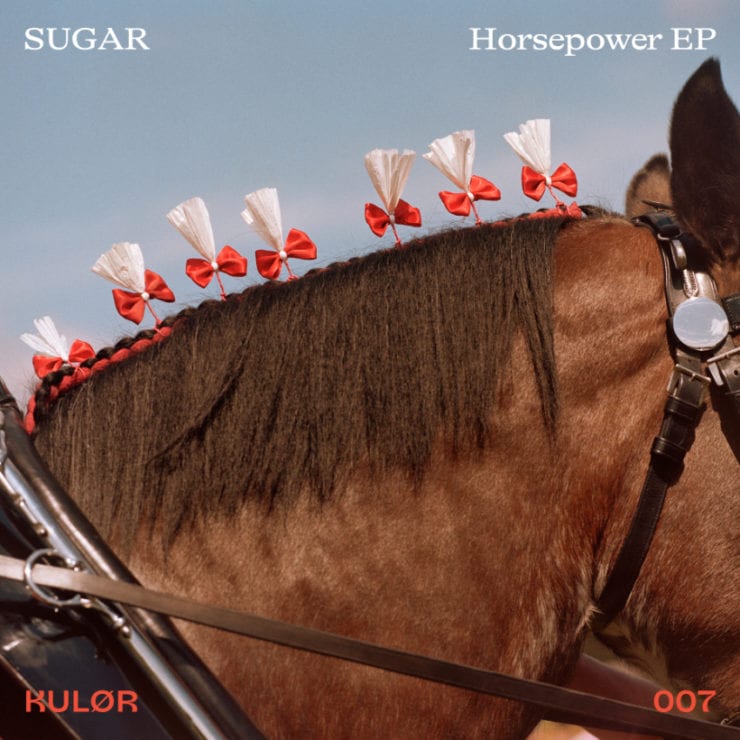 There is a Danish word “hygge” which is an idiom (according to Wikipedia) for a “mood of coziness and comfortable conviviality with feelings of wellness and contentment.” This isn’t a word that you would often associate with 140+ BPM techno, but it’s cropped up in reviews of Copenhagen’s renowned fast techno scene before. And I kept returning to it listening to the latest on Courtesy’s Kulør from native son and central axis of the Copenhagen scene, Nikolaj Jakobsen aka Sugar.

Take the EP’s title track, ‘Horsepower’. It has the crunch and colossus kicks of most paint-by-numbers European techno that has borrowed from EBM and Industrial as of late. But what makes the track exciting and gives it that feeling of “wellness and contentment” happens around the 2-minute mark where a slightly warped synth-line comes in and adds just the right amount of silliness. All the sudden the reverb wash that crashes over the track doesn’t feel so damn self-aware and like a little light is coming in through the blinds.

But don’t get me wrong: unlike Sugar’s recent IA MIX where he showcased a different sound, these are serious tracks that will do serious damage wherever they are played out. But, still, there is a delicateness and a knowing wink in the composition. ‘Trained to the Grass’, for example, is a driving, Fordist nightmare, but when the robotic synth-line comes in, even the siren wails that envelop the final third make the track feel less Blade Runner and more Modern Times.

‘Crack The Whip’ might be the exception. The vortex of voices, the darting synth, the sheer intensity of the kicks, and the absolute assault of icy vibrato in the breakdown make this the only song that doesn’t come up for air. But the record manages to finish on a high note. ‘Keep the Wounds Clean’, if you can look past the title that sounds lifted from a Mayhem rip-off band, might be the best track on the EP. A skittering beat duets with the most memorable high-end on the record. It has the same hygge-feel to it, but it’s the end of the evening when that feeling of contentment is slightly offset by a melancholy that it’s over far too soon.

‘Horsepower’ EP is out now via Kulør. Order a copy from Bandcamp.

1. Horsepower
2. Trained to the Grass
3. Crack the Whip
4. Keep the Wounds Clean