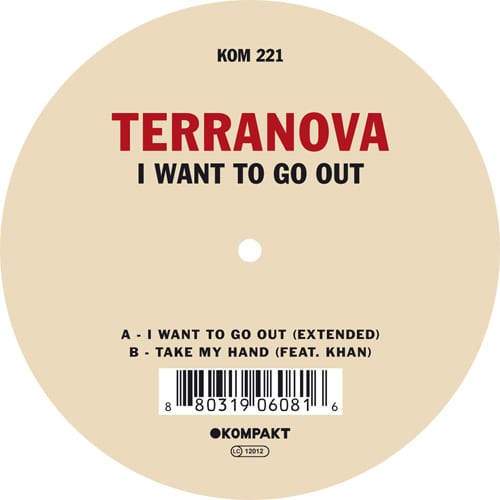 For those not aware, Terranova are a 3 piece band from Berlin, they’ve been on the circuit since the early 90s and have picked up all sorts and varieties of sounds and experiences along their musical journey. Having released 3 albums, 9 EPs and a DJ Kicks mix CD on Studio !K7 as well as an album on Ministry of Sound its fair to say this band have a fair bit of experience in creating dance music. However with such with such a long history with Studio !K7, what happens when take the band away from their traditional label environment and plug them into the Cologne based Kompakt’s release schedule, which they also plan to release Terranova’s forthcoming album, due in 2012.

Difficult question to answer but if I was asked to single out a record from 2011 that defined the sound of Kompakt, Terranova’s ‘I Wanna Go Out’ would be at the top of my list. Right from the beginning this record has pop written all over it, its retro flavoured vocals, 303 bassline, clean drums and moody chords creates a more than satisfyingly deep and uplifting, euphoric record soaked in early 90s dancefloor nostalgia and rinsed in acid house. This record isn’t just your average party tune; this will go down in history as a dancefloor anthem.

On the flip Terranova serve up a moody low tempo floor shaker. Steel drums clang alongside a murky beat, whilst Khan whispers deep moody vocals, luring the listener to “walk with me…take my hand”. As the track progresses so do the sounds within, mid track Terranova wind it up with a chord reminiscent to the productions of ‘The Knife’ and ‘Oni Ayhun’, injecting a mind inducing hypnotic twist. Ultimately this track is a raw slow tempo body shaker, for me it conjures up dark visions of sweaty basements raves. This record contains two quality house tracks, which deserves your unadulterated attention.