At the risk of stating the obvious, even though Berlin bursts with all sorts of music events only a few manage to make a noticeable impact. Amongst these stands The Long Now –  a place for the enduring present, comprising over thirty hours of concerts, audio-visual installations and live electronic performances, which the public are invited to experience in many ways: be it listening, watching or even sleeping to them.

Organised by Berliner Festspiele as the closing event for the second edition of MaerzMusik – a festival dedicated to contemporary forms of musical expression, the lineup is curated by Berno Odo Polzer, Atonal’s Laurens von Oswald and Harry Glass. Taking place in one of the most evocative locations of the German capital, Kraftwerk, The Long Now is an ode to architectural and sonic magnitude. 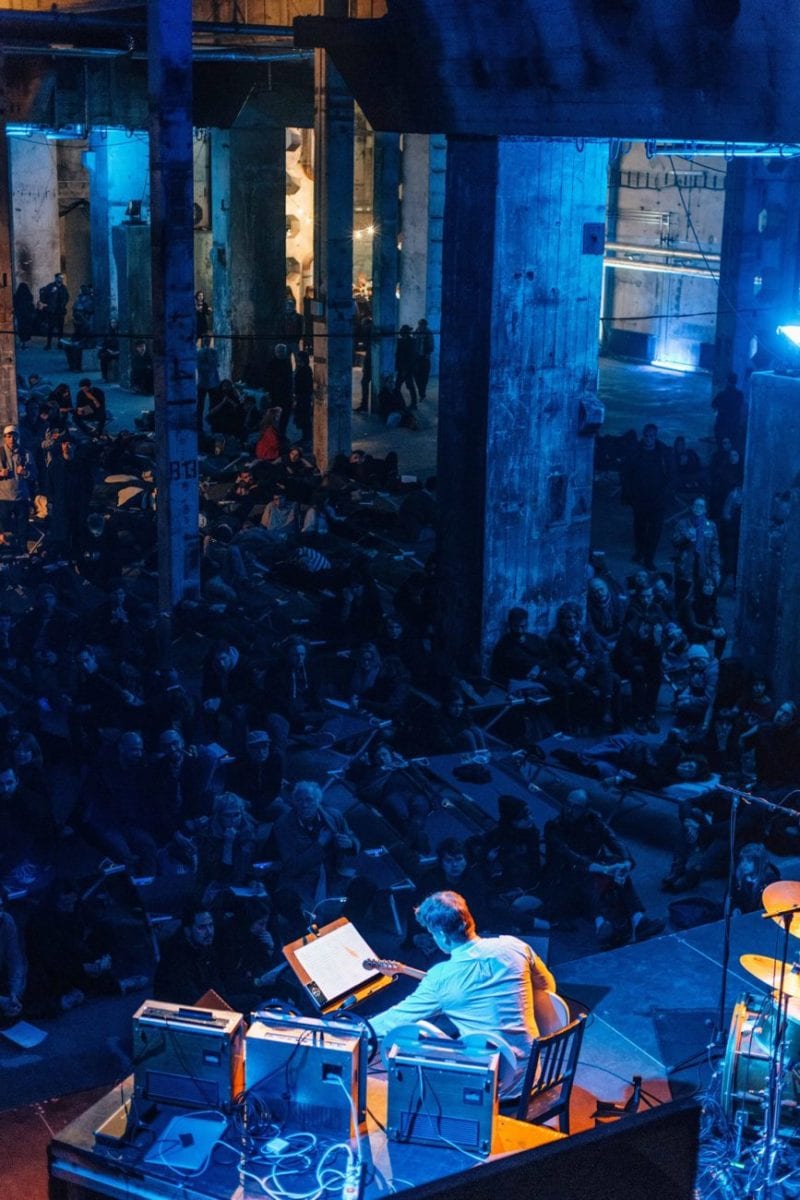 It’s a sunny day in Berlin, one of the first for a while and everybody is enjoying it outside. As the sun begins to set I walk towards Kraftwerk to ramble between the concrete pillars and vacuous surroundings. The first sessions of The Long Now take place on the ground floor where people are lying on benches whilst listening to Kobe Van Cauwenberghe strumming an electric guitar on stage alongside Johan Vandermaelen, as they recreate two live suites by Brian Eno and Robert Fripp.

On the upper level is an artificial fire pit in the middle of a big squared room, the faux flames flickering and setting a reassuring ambiance that help bringing people together whilst others enjoy the whispered sounds and fire cracklings from a distance, romantically transforming the space into a concrete cavern.

Following a quick bite of pastrami, I head towards the stage where Italian percussionists Andrea Belfi and Francesco Donadello are playing live under a turquoise lighting, enveloped in some sort of prophetic aura. One of the best performances of the weekend undoubtedly: weighty downbeat basslines lacing up with premonitory synths, fluidly twisting interchanges of drums and melodies.

Andrea Belfi and his instrument make one; he caresses the drums with care and respect. Right on the heels of the percussive duo, it’s Keith Fullerton Whitman’s turn – the ambient-drone artist is standing alone on stage in front of his gear. His live opens up with a blend of mellow and rainy chords playing footsie with echoing thunders. White noise mingles with ethereal sounds that recall distant spaces, eventually leading to a sonic blast.

Before we move floors, Kara-Lis Coverdale performs the closing live set: very different from the previous acts in essence, noticeably more dreamy and ambient-oriented. Soft bells and floating synths both mentally and physically help the crowd move to ‘Ebene 8’, the magnificent top floor of Kraftwerk.

Whilst sitting on my romantically broken bench (the only one left), the luminescent frame of Berliner Festspiele hung above the stage, like a gateway to another world. The door keeper of paradise is Alvin Lucier and his voice, the sound of a robot murmuring in a cave that progressively modulates and curls.

‘I’m sitting in a room’ is one of the artist’s most well-known works, conceived for voice and electromagnetic tapes; the frequencies of the room are reinforced with feedback from the words he is repeating as a mantra, submerging the public into a communicative trance. Bewitched by this repetition that creates an endless flow of intertwining sounds, my mind is finally clear, there is no more space for thoughts. Magnificent.

Last but not least, a collective of singers and instrumentalists going by the name of Grandelavoix performed their piece, ‘And Underneath the Everlasting Arms – Polyphony for a Better Sleep’, focusing on the phenomenon of sleep and insomnia through a mix of spoken words, dramaturgy and chants.

The performers are standing beneath a light in separate groups. The setting recreates an odd theatre-like situation, with no microphones being used, echoing their voices across all floors; angelical voices even, each of them moving seemingly independently but in the end aligning perfectly with one another.

The last notes of Punctum by Caterina Barbieri and Carlo Maria ricochet on the thick walls of the former power plant, while my eyes slowly get used to the darkness and the soft violet lights. Rephlex-affiliated producer Aleksi Perälä follows with his ‘Colundi electronics’, as a spacey feminine voice introduces what will be one of the most dance-oriented performances of the event.

Synthesizers spiral and draw elliptic courses, continuously expanding their sonic space, as a downbeat groove mumbles in the background accompanied by splashy and quirky sounds, slowly heading us towards a land where eerie pointillist techno is the only master. Benches start disappearing to leave space to a dancing crowd which moves along the increasing tension created by the Finnish artist.

An intense stroboscopic show welcomes PAN’s multi-faceted artist Helm. His live is immersed in pitch black darkness, except for a few climatic moments enhanced by ragged white lights and smoke. Underbrush whispers, spooky laments and evil-ish bells calm the dancers, bringing them back to their seats. As opalescent tonalities miming huge lunar dust tornadoes and solar winds unfold, a sensation of transition falls upon us: we are approaching a certain zone, similar to that of Tarkovsky’s masterpiece ‘Stalker‘, and a sensation of constant menace won’t let loose on the public until the mighty Wolfgang Voigt appears on stage.

A religious silence welcomes ‘Rückverzauberung’, one hour of ambient perfection and sonic pureness. Invisible yet right in front of our eyes, a musical papyrus unrolls and allows the audience to savour padded visions: there is something behind the mist which can’t be revealed but only heard. It could be live violins, a faraway chorus of grey souls, a waterfall that starts in heaven and vanishes in hell, migrating mountains rumbling. The instruments gradually surface, dissolving the imaginary fog in and out of ourselves. Even though I was gutted to miss Tim Hecker’s eagerly awaited performance, I left the place with a peaceful and relaxing feeling of plenitude.