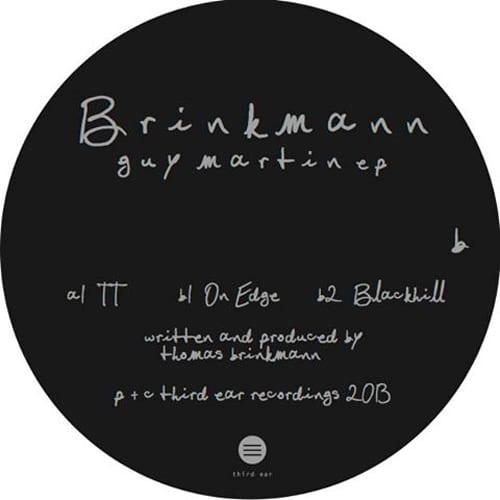 Sometimes it’s strange to see producers who have only released a few EPs gain rapid acclaim, while others with vast, excellent bodies of work remain relatively unknown. Take for instance Thomas Brinkmann: since the late 90’s, Brinkmann has released a slew of quality albums and EPs including those under his Soul Center alias, in both cases establishing something remarkably unique. Mostly within the techno sphere, he has flirted with minimal and its mutations, other times going for a more textural sound, synthesising sound design with downtempo rhythms. On the other end of the spectrum he has used his Soul Center moniker to craft more party-orientated music, toying with jazz, deep house and boogie influences.

It’s fascinating to witness that in 2013  Brinkmann’s sophisticated sound has aged so well. Unfortunately forced to take an extended break due to health issues, his comeback EP takes up where he left off after a three year hiatus . Titled Guy Martin – after the famous motorcycle racer of whom Brinkmann is a fan – the 12” offers three tracks peddling his known trademarks. In TT heavy techy beats hit the floor for eight minutes while a funky melody slowly evolves after the halfway point. The sound and effects unambiguously point toward the heyday of the ‘00s yet never yields to Kompakt-saluting retro-fetishism, rather a sophisticated updating process of his original sound.

On Edge opens the B-side with guitar riffs which recall EBM, yet sadly there is not much magic here: a few basic samples are stretched across the track with little sense of progression. It’s still classic Brinkmann, but after the EP’s strong opening it sounds a bit too safe. Luckily, the closing track more than makes up for this: Blackhill is a silky, luscious piece of downtempo music with honked synths and mellow, lazy electronics, a perfect soundtrack for your Sunday evening happy hour. So, the verdict? The Guy Martin EP is an accurate report that Brinkmann still knows what’s going on, and he’s not ashamed of proving it. His return is immensely welcomed; and judging by the fact that Third Ear has promised a series of EPs, one can hope that his best is yet to come.