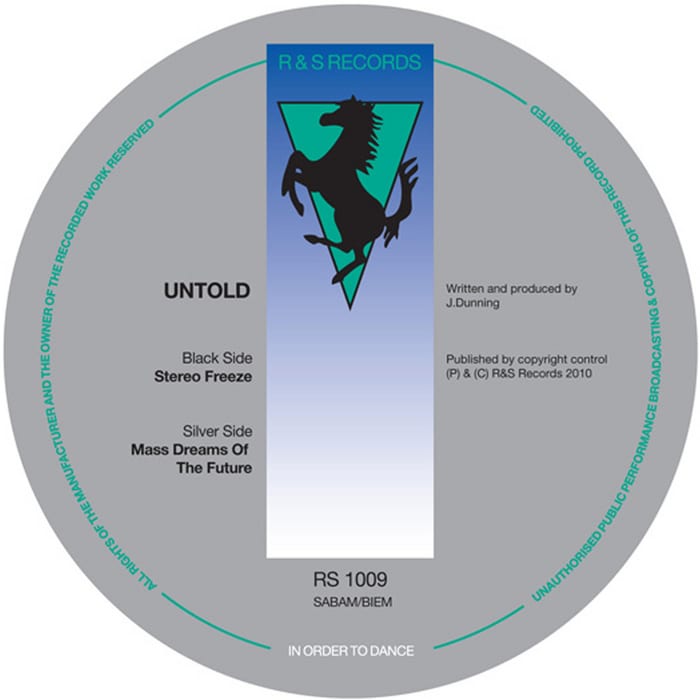 Even in an age where it is the norm to deliberately challenge genre boundaries, Untold is one of the few dubstep producers who has done so consumately. Since helping to push the form into ever murkier waters via his own Hemlock imprint, Jack Dunning has demonstrated remarkable versatility, culminating in the recently-released ‘Myth’ with Roska – a release which glided deliciously and expertly between squelchy 4/4 tribalism and the authentic warmth of classic Chicago.

His first release for R&S – now seemingly positioned as the ultimate home for any self-respecting bass music experimentalist – is yet another startling musical departure. ‘Stereo Freeze’ is perhaps best described as militant, febrile future-electro, all agitated propulsive drums and buzzing mid-range synths. With not an organ stab or modulated minor triad in sight, the overall effect is surprisingly and impressively abrasive; essentially, Dunning has managed to sublimate the raw aggression of mainstream dubstep into an abstracted, industrialized form.

‘Mass Dreams Of The Future’ is even better: as a techy, 4/4 whistle-stop tour through the seedier enclaves of 80s Detroit and 90s Berlin, it demonstrates once again that we have a producer here at the top of his cross-pollination game, deftly switching from subterannean warehouse to reverberant chordspace, while coaxing another memorable FM bassline and more uncompromising 12-bit timbres from his battery of mutilated plugins.