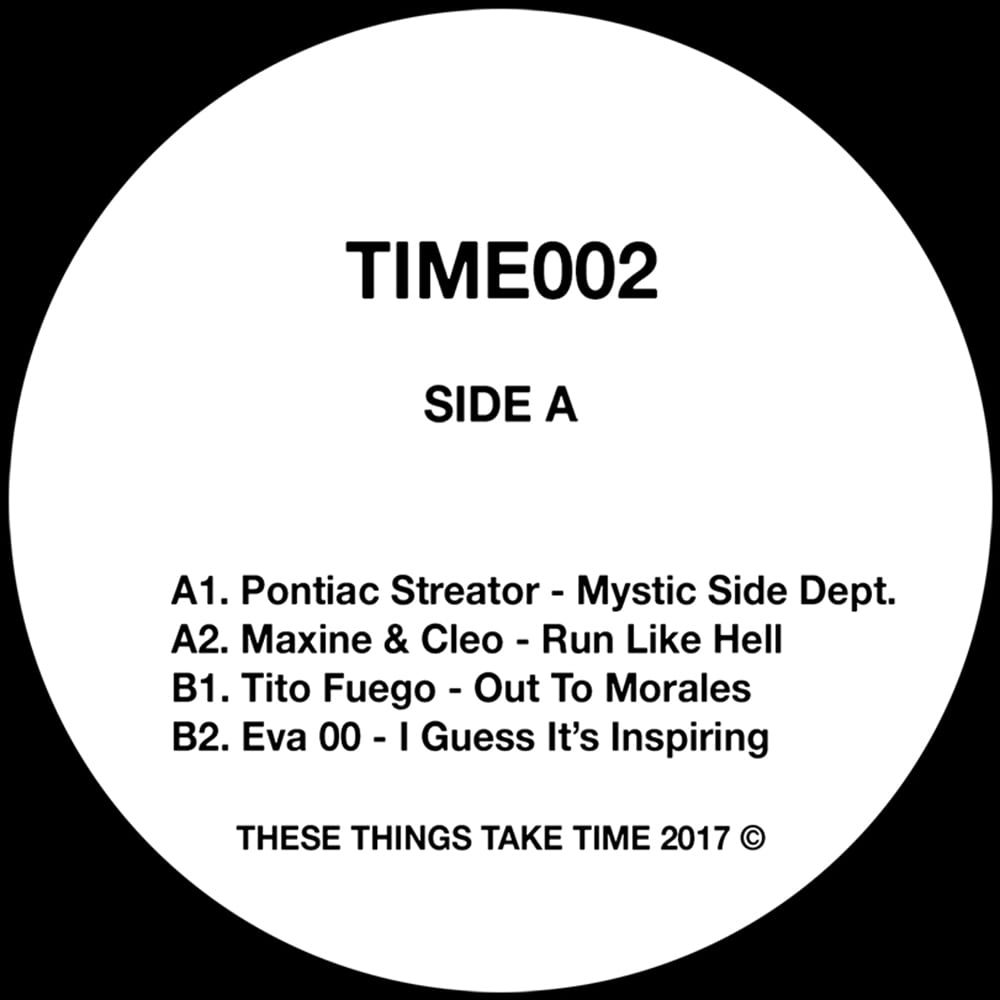 In a couple of weeks the imprint drop their second compilation, ‘TIME002‘, much shorter with just four tracks instead of the previous tape’s nine but also their first record pressed to wax.

Easing us into this lush collation of pumping 4/4 engineering and vibrant, exotic-infused ambiences, Pontiac Streator delivers one of the EP’s highlights. ‘Mystic Side Dept.‘ doesn’t need much introduction time to implement its sensuous elixir of jazzy shuffle, rousing drumwork and iridescent melancholia. Add to this a healthy dose of natural sounds samples and you’re in for a rewarding trip in emerald dreamlands.

Next on, Maxine & Cleo’s ‘Run Like Hell‘ is a fine piece of finely-arranged ambient house tinged with a discreet steely feel that ensures the track a reliable dancy backbone and mix-in aptitudes. All in all a well-groomed, laser-precise club weapon that should be enough to satisfy dancers no matter the hour of the day but that perhaps lack a bit of extra soul and spirit to take it to further gratifying heights.

On the flip Tito Fuego’s ‘Out To Morales‘ breaks things in on a 100% old-school house vibe, marrying the flexile bounce of detuned, trumpeting chords with the sparkling radiance of classical strings on tear-jerking mode. Lavishly textured neo-lyric urban house melter in full effect, reminiscent of Aybee’s deft take at the “genre”.

Closing the EP in stupendous manner, Eva 00’s ‘I Guess It’s Inspiring‘ offers a well-balanced crossover between the sample-heavy mechanics of lo-fi house, variegated palette of sound of ambient and Far Eastern music tropes and vox-driven jacking grooves of Chicago’s finest house platters. We had little doubt the label would come up with anything less inspiring than their first outing given their founding word and impeccable curation, but ‘Time002‘ does more than living up to expectations by setting even higher hopes for the future.

TIME002 is released via These Things Take Time on 14th July, pre-order a copy from Juno.

Discover more about These Things Take Time on Inverted Audio.