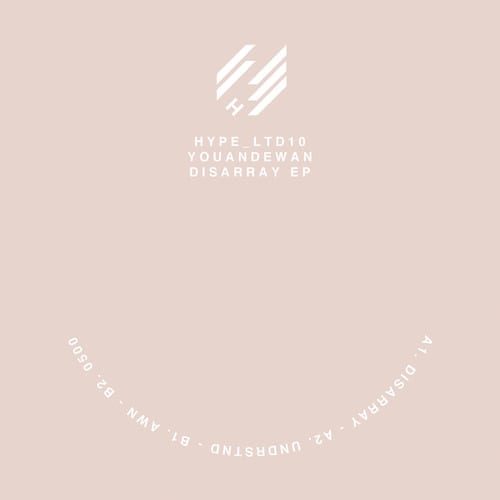 Though the year is still young, there has been a strong trend of great releases hovering on the border between dance music and home listening, particularly on the foggy spectrum between house and bass music. The likes of Leon Vynehall and ∆ ∆ have already offered some great variations on this hazy middle ground, and the latest release on Hypercolour’s low-key sister imprint seems set to continue these deeper explorations with style. The new addition comes courtesy of Ewan Smith, an assured purveyor of deep sounds whose sporadic release schedule has been outpaced by a series of notable DJ sets and great remixes. Disarray is the young producer’s first solo release in over a year, and the restrained elegance of these almost-club tracks should assure fans that it was worth the wait.

The EP kicks off with title track Disarray, where Youandewan’s textured beats sink beneath melancholic synth washes and sensuous, half-heard vocals. A soaring 303 bassline takes centre stage here, snaking through the soundfield and adding a subdued emotive drive to the track. Second cut Awn is similarly impressive, a more energetic variation on the theme where another subtle beat pattern holds down drowned RnB vocals and an uneasy synth wash. The sounds here are spare but expertly applied, showing a keen attention to space, while each sonic element is textured and rich, from the growling basslines to the organic drum samples.

Undrstnd starts as another languid number, introducing sunken vocals and blue synth notes before a swollen bassline breaks the pattern, introducing sharp technoid hi-hats that shake off the chilled-out atmosphere of the A-side. Closer 0500 is another more propulsive number, anchored by a sharp kick-clap combo that allows the mid-range to explore shimmering synth work and more ghosted vocals. Although Disarray keeps up its melancholic mood, Youandewan has a knack for mood and restraint that many of his contemporaries lack, making this EP one that you’ll keep returning to on and off the dancefloor.