Nostalgia is a beautiful trip, especially when Out Of Joint Records opened up in my home city of Leicester – rekindling fond teenage memories of record shopping at Malcolm Arcade.

Back in the 1990’s I was hooked on Jungle and Drum & Bass, every month I’d get a train into Leicester to buy the latest Helter Skelter cassette pack from BPM Records and listen to recent drops from the likes of RAM Records, Metalheadz, Moving Shadow, Full Cycle and V Recordings that would all help educate and inform my burgeoning musical direction.

Fast forward two decades and I find myself back in Leicester walking through the city centre with the hope of finding the shops that I used to frequent. A lot has changed since those halcyon days of Rollersnakes, Dominoes Toy Store, Irish Menswear and Wellgosh (Top Floor Silver Arcade) – back when the Nokia 5110 was novel and online shopping was a futurist’s dream.

Sadly the prosperity of Leicester has somewhat declined since the 90’s. The bustling high street once packed with independent stores is now victim to shuttered shops, mundane chains, fast food joints and vape stores.

With the majority of record stores from yesteryear now closed or relocated, which if I remember correctly were BPM Records (3. Malcolm Arcade), Ultima Thule (1. Conduit Street), Boogaloo Records (101 Granby Street), Rockaboom (4. St Martins Square, now at 18 Malcolm Arcade)  – Leicester has a new record store, which has quickly become my go to fix to satisfy my widescreen musical taste and is rapidly becoming a beacon for underground and experimental music in the Midlands.

Established in the summer of 2018 by a group of childhood friends – Ben, Coops and Dan – Out Of Joint Records was born out of frustration from having to rely on the internet or travelling outside of the Midlands to acquire records. A small unit, formerly a bong shop, with cheap rent became available at Unit 2 Malcolm Arcade, next to the former site of BPM Records, and the shop was fitted out to establish Out Of Joint Records – a specialist vinyl emporium stocking experimental electronic dance music, dub, reggae, avant-garde and leftfield music.

As I walked into Out Of Joint Records for the very first time, I was taken aback by the range of music on offer. It was packed with records, cassettes, magazines and clothing from the likes of Good Morning Tapes and The Trilogy Tapes. They even have dedicated bins for; Berceuse Heroique, Boomkat Editions, L.I.E.S. Records, Basic Channel, plus ample supplies of second hand records spanning dubstep, jungle, house and techno. It was as if I had stepped into a record shop specifically tailored to my tastes.

With such an astute record store now in my periphery, I had to find out more about the founding principles of Out Of Joint Records and the team who made this store a reality. In the interview below, Out Of Joint Records co-founder Coops discusses how it all came about. 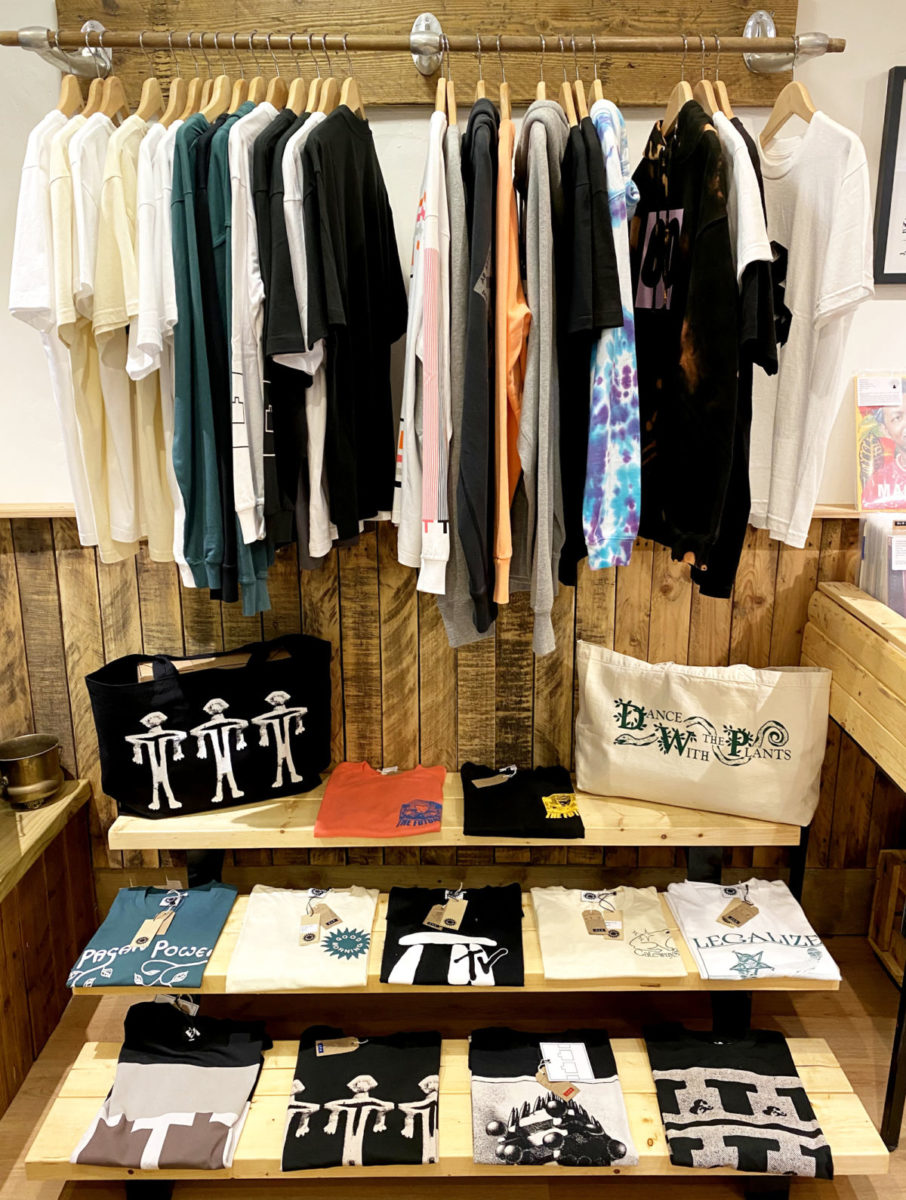 When you were growing up what record shops did you visit and enjoy spending time in?

In Leicester there were a bunch of great record shops we used to love spending time in; BPM Records, Rockaboom, 2Funky, Ultima Thule. Outside of Leicester we used to take regular trips to Quaff Records, Mr. Bongo, Honest Jon’s and a whole host of spots around London. Then there was Swordfish Records over in Birmingham if we were keeping it kind of local, and of course Hard Wax in Berlin whenever we made trips over there. We used to go over there quite a lot.

Opening up a record shop is a thing of what dreams are made up of – did you have any previous experience and what urged you to open up a record store in Leicester?

All three of us are shop boys so have worked around town most of our lives, sometimes together, we think of those days as a golden era. We wanted to open up our own shop ever since. Once our record label, Grade 10, got us more involved in the music industry we knew that a record shop which sold other items such as good quality clothing, art, and magazines was the right choice for us.

Tell us about the team behind the store and what each of you are responsible?

We are three life long friends who wanted to work together doing something we enjoy. We have no real responsibilities apart from opening the door in the morning, making sure the coffee gets made and locking up at night. We also supply the vintage shop next door with tea and coffee all day which is kind of a big deal in the arcade.

Tell us about your location, Malcolm Arcade, it’s history and your affiliation with the site?

Malcolm Arcade has been a breeding ground for interesting independent businesses for decades. Mainly because the rent is cheap. Over the years it has housed the legendary BPM Records, Casino Skates and Wellgosh… we’ve hung out, shopped or worked in there for as long as we’ve known each other. The longest serving shop in the arcade is Rialto’s Cafe, they’ve been providing us all with fried breakfasts since we were nippers. 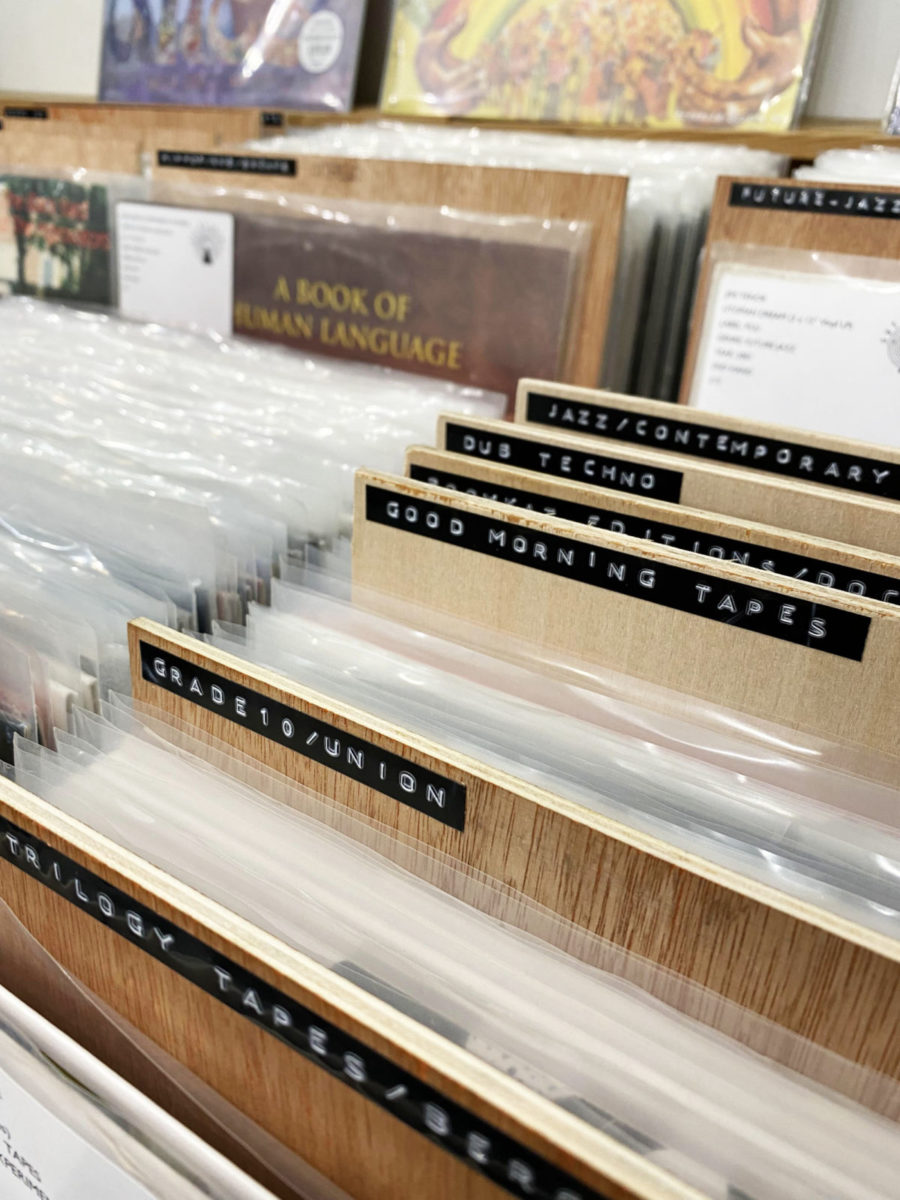 What was the space used as before you renovated it to become Out Of Joint Records?

Tell us about what you have constructed to make the shop to turn it into a record store – people you’ve worked or collaborated with?

Coops and his Dad went crackers with pallets and turned it into a record shop. We owe Big Al a large debt for his woodworking skills. Not bad for an ‘O’ level in woodwork, or that’s what he kept telling us anyway.

Let’s talk about selection. What scene[s] does your record shop represent and cater for and what genre[s] can people expect to find in your store?

Out Of Joint Records sits somewhere between Honest Jon’s, Hard Wax and Boomkat. Really we don’t look at any specific genre of music, just good music.

What else do you sell / do from the store?

We have a lot of art and zines from local people who essentially just do walk-ins and ask us if we’ll buy it. We like this approach because it gives some of the less business minded artists out there a home in their own city. We do tons of great cassettes too; at the moment we’re waiting for some stuff to arrive from Hong Kong.

We have stuff from France & Amsterdam, Dan just picked up a really nice tape from Japan. We stock Record Culture Magazine, which although is a bigger publication, feels like it has a place in our shop. It features loads of labels and artists we back at Out Of Joint. We also have a small screen printing studio upstairs we use to print our own tees and totes. We have a small rail of clothing as well. 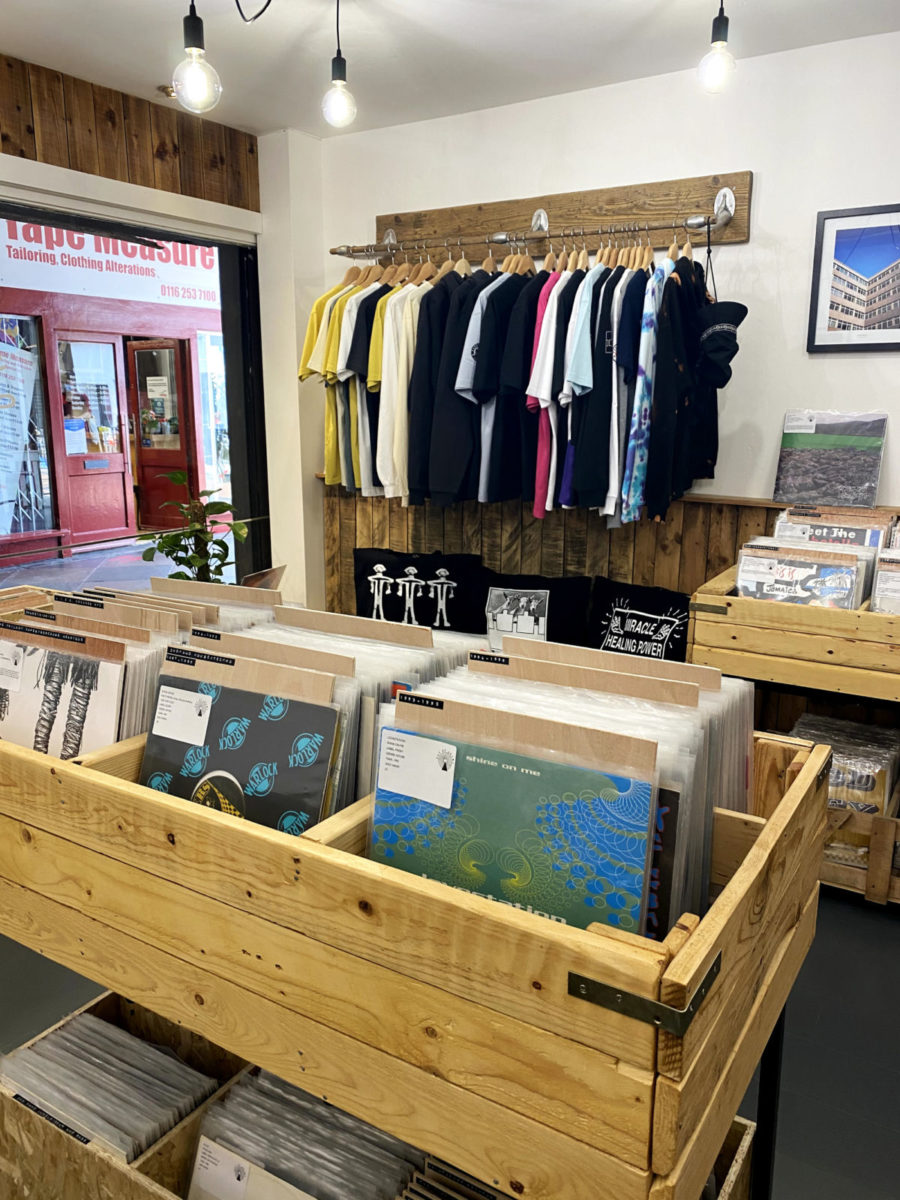 You appear to work closely with select imprints – The Trilogy Tapes and Good Morning Tapes – both highly respected, but also expensive outlets for merchandise. Do they sell like hot cakes?

They’re two brands we respect massively, and being people who have worked in the clothing industry, both feel like they continue the historic lineage of Mo Wax, Futura, Silas, Bape, Maharishi and a bunch of other truly iconic brands that brought music, fashion and culture together in the late 90s and early 2000s.

What do you think of the music scene in Leicester – what are people into and what are they buying?

Leicester has a really mixed and receptive music scene. But the underlying sound that has always reverberated through the city has been Dub and Soundsystem culture. The underpinning of this was the strong presence of Leicester Carnival. If you speak to the average musician in Leicester you’ll often find their connection to music goes back to those sunny days on Victoria Park.

In comparison to the store itself, what percentage of sales are coming from online?

Before COVID we really saw ourselves as a local spot serving local people with a very small online presence. This was down to us never pushing things too hard on social media. But as soon as the pandemic hit and the shop had to close, all of our local customers and a growing customer base worldwide really supported us through this time online. Since the shop has reopened this has continued to grow for which we are eternally grateful. But it’s been great seeing all the local faces back in the shop too.

What other record stores in the world would you love to visit?

Essentially if we’re in your city then we will be visiting your store. Of course there are some stand outs around the world but really finding those small unknown shops in small cities and towns are the jewel in the crown for us. Saying that we can’t wait to visit Commend NYC and Big Love in Tokyo. 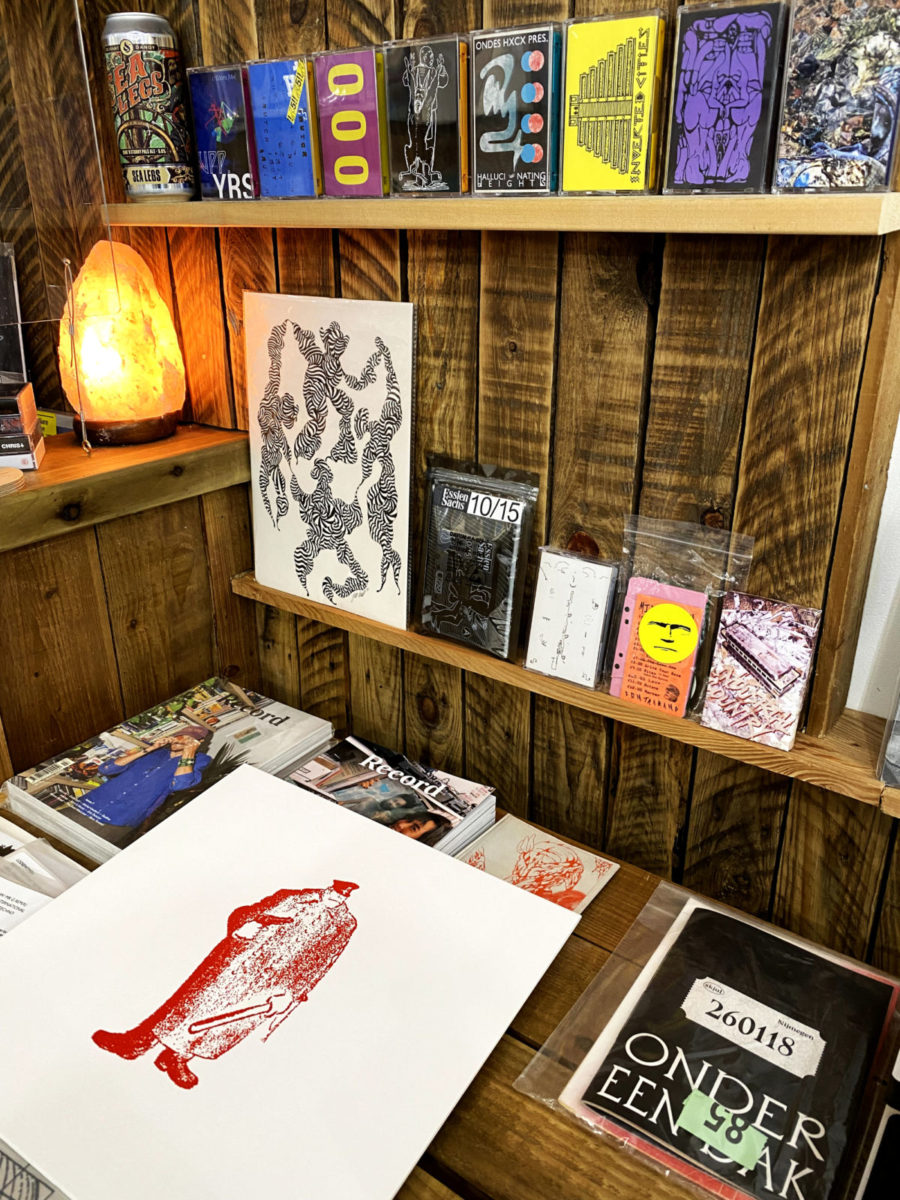 Tell us about your own record label Grade 10.

Grade 10 is ultimately the gateway to us opening the shop. We started buying so many records from shops in other cities to support our DJ sets and with Leicester lacking a shop to buy rare and exotic dance music it seemed the logical progression to open our own shop. We also met so many people who wanted to help us create a new hub in a city that used to be so well renowned for record shops; we can still feel the warm shadow of DJ SS’s record shop 5HQ.

Looking back at opening up shop, if you could do it again, what would you change?

What record labels do really well in the store?

Some of the best selling and most exciting stuff is in our 2nd hand section though, it’s full of the most iconic labels from the last 40 years. Way too many label names to mention, but we carefully choose every record that hits the bins. No filler.

What do you hope to educate people in listening to?

We just want people to find their own way and if we can do that by selling them what we consider to be the best music going that’s all we can do.

Photography by Tom Durston & Out Of Joint Records. View store videos on Instagram. 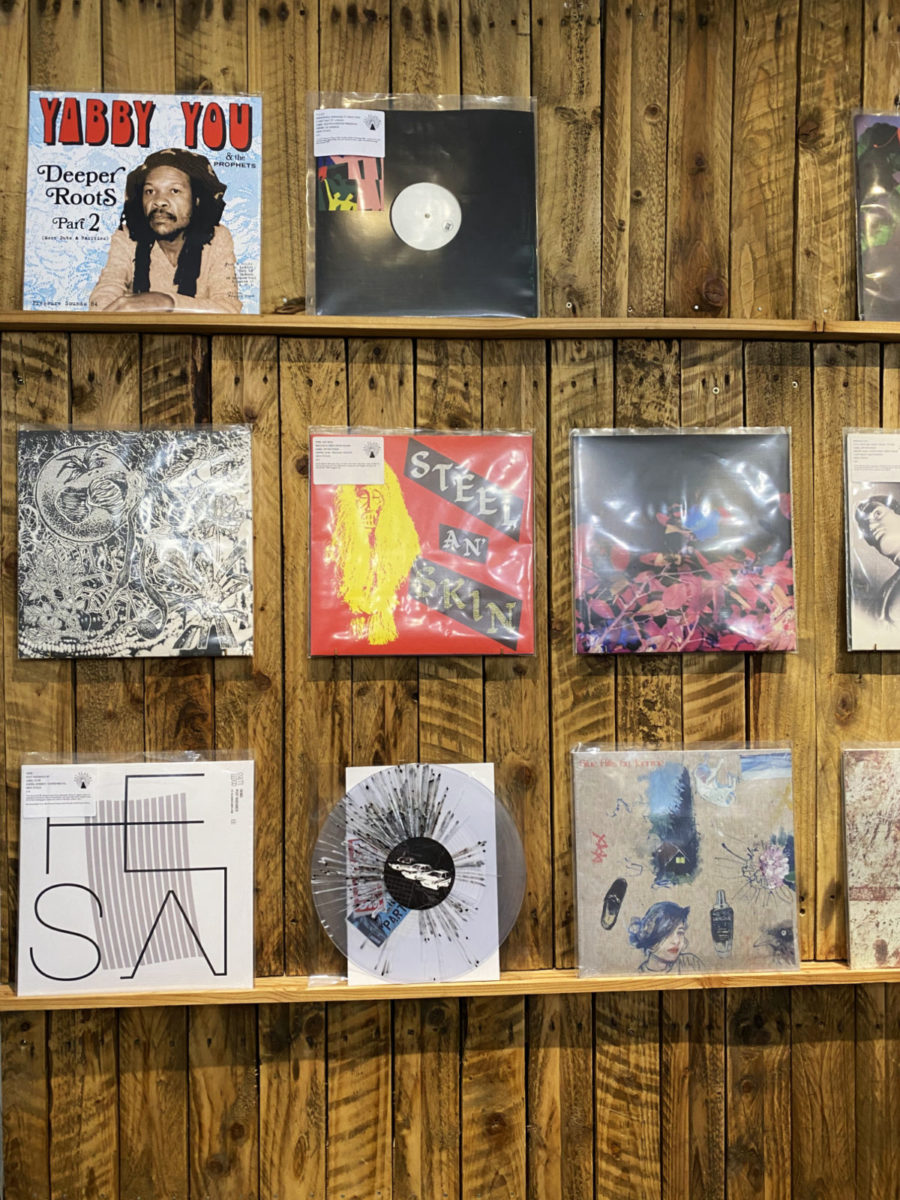 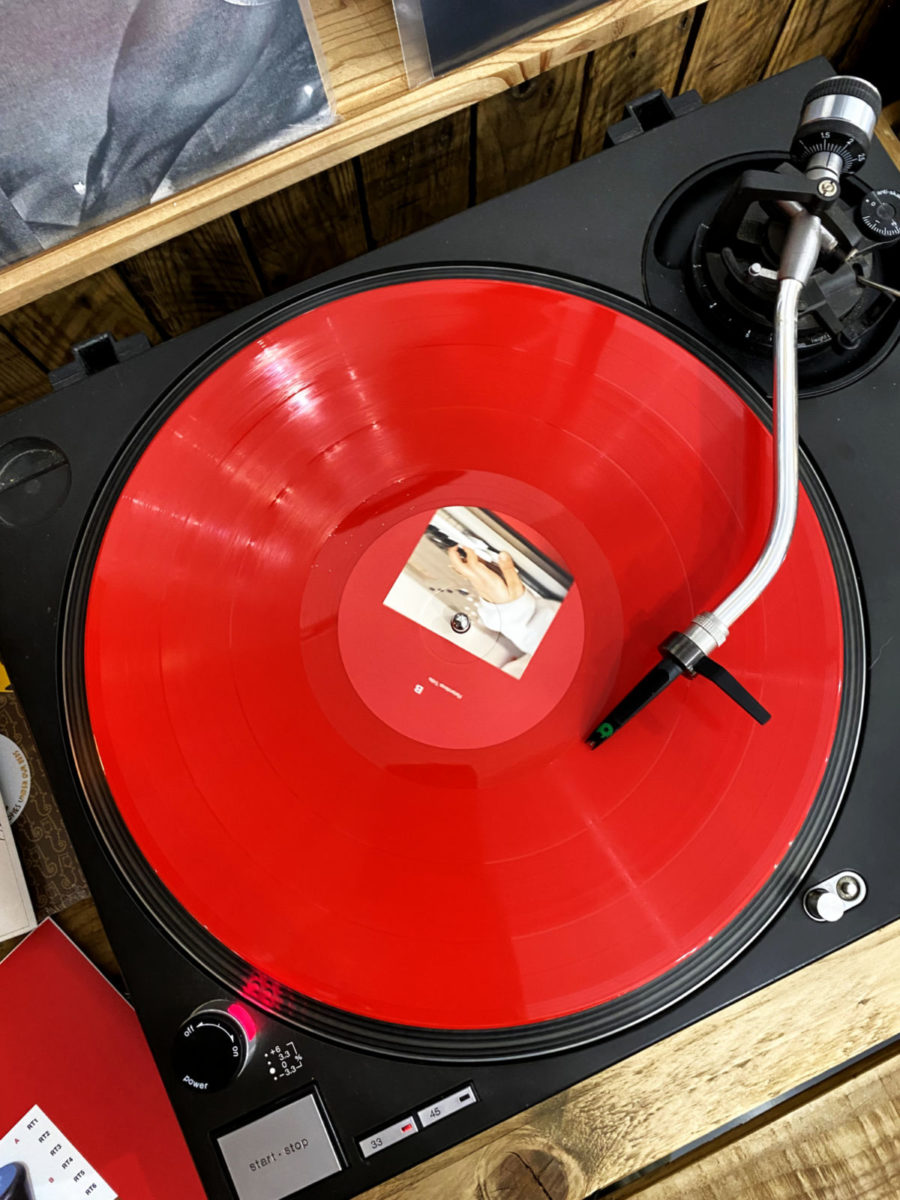 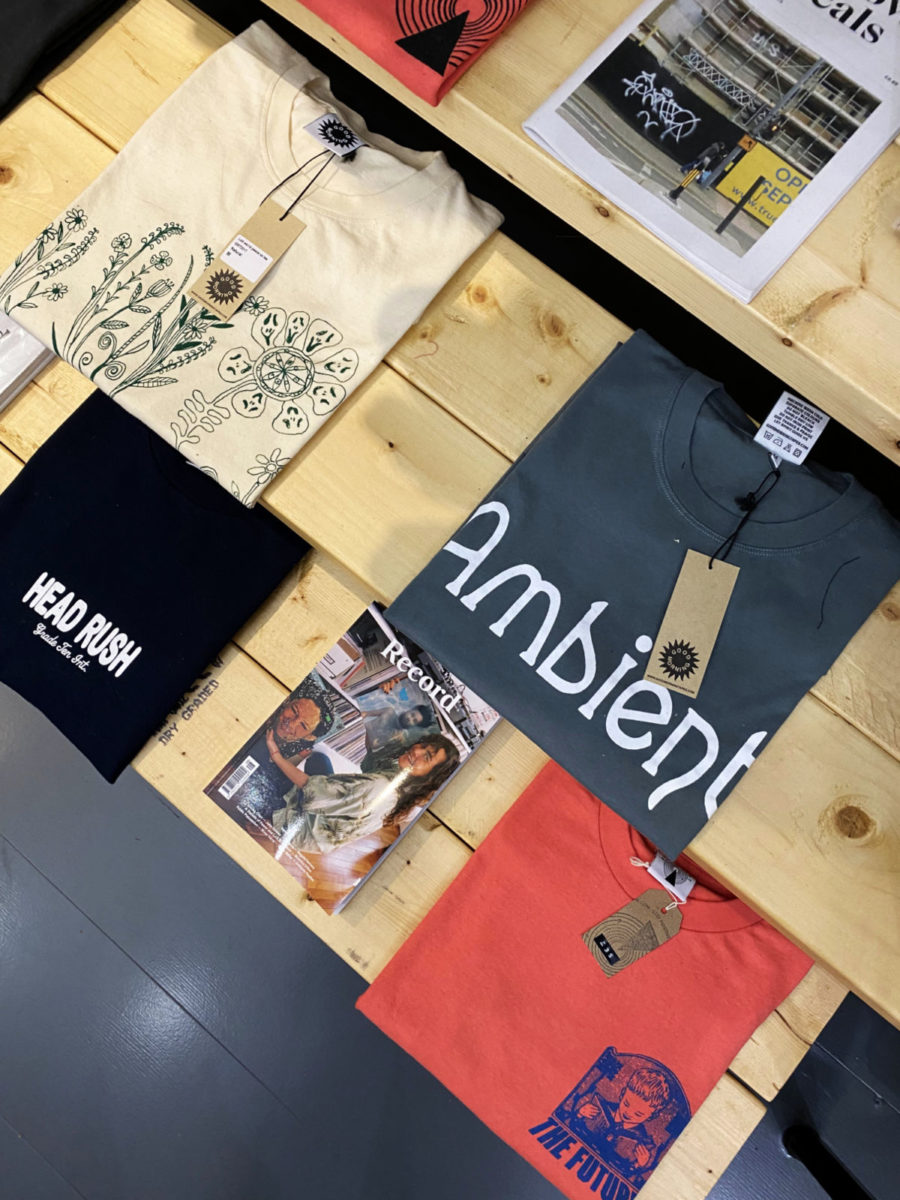 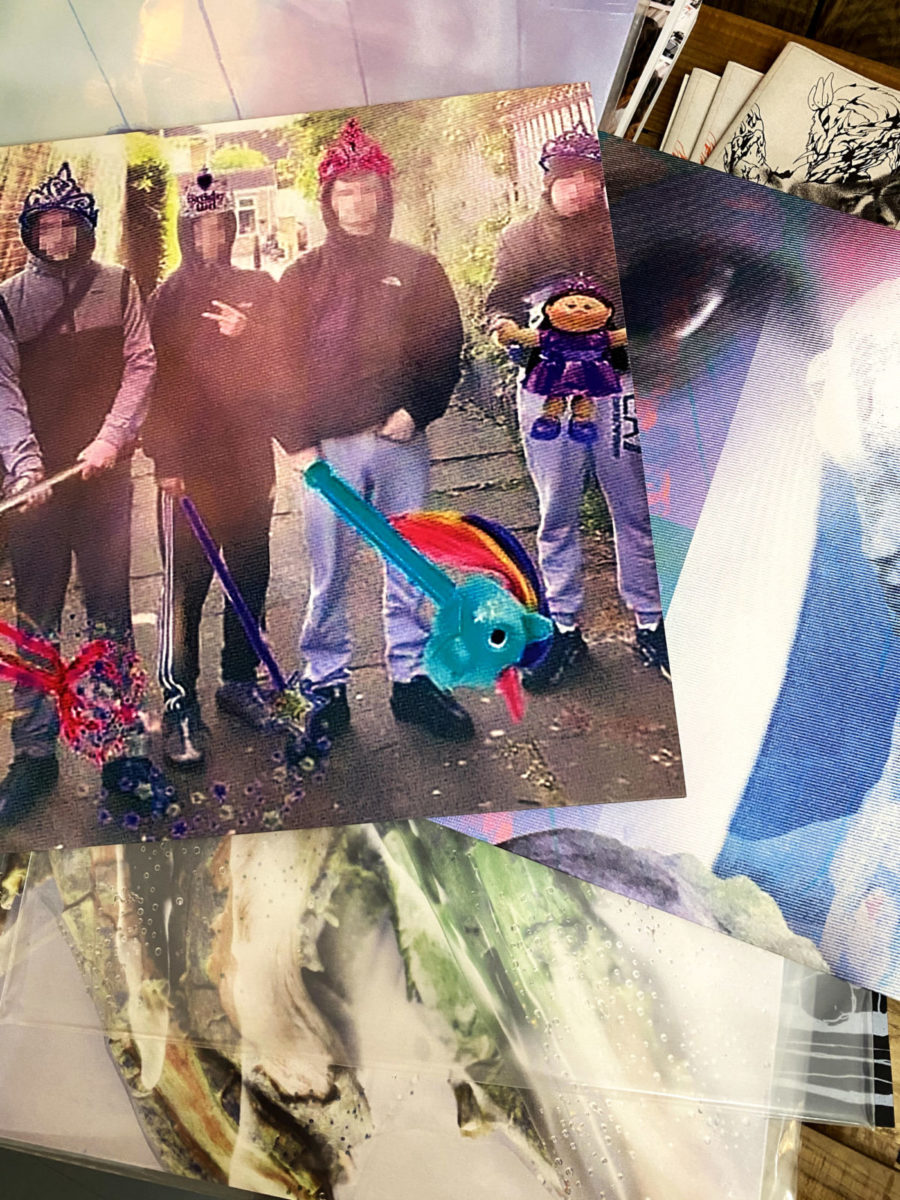 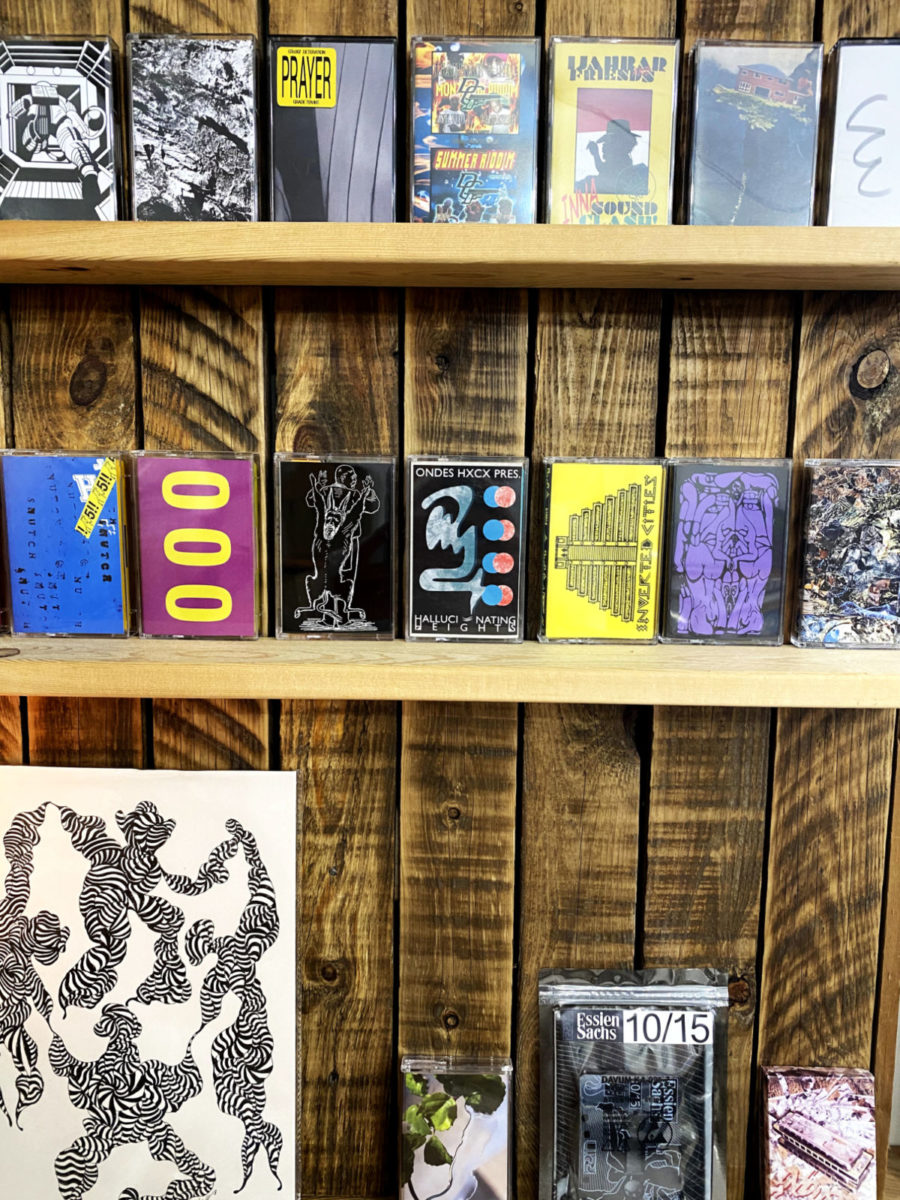