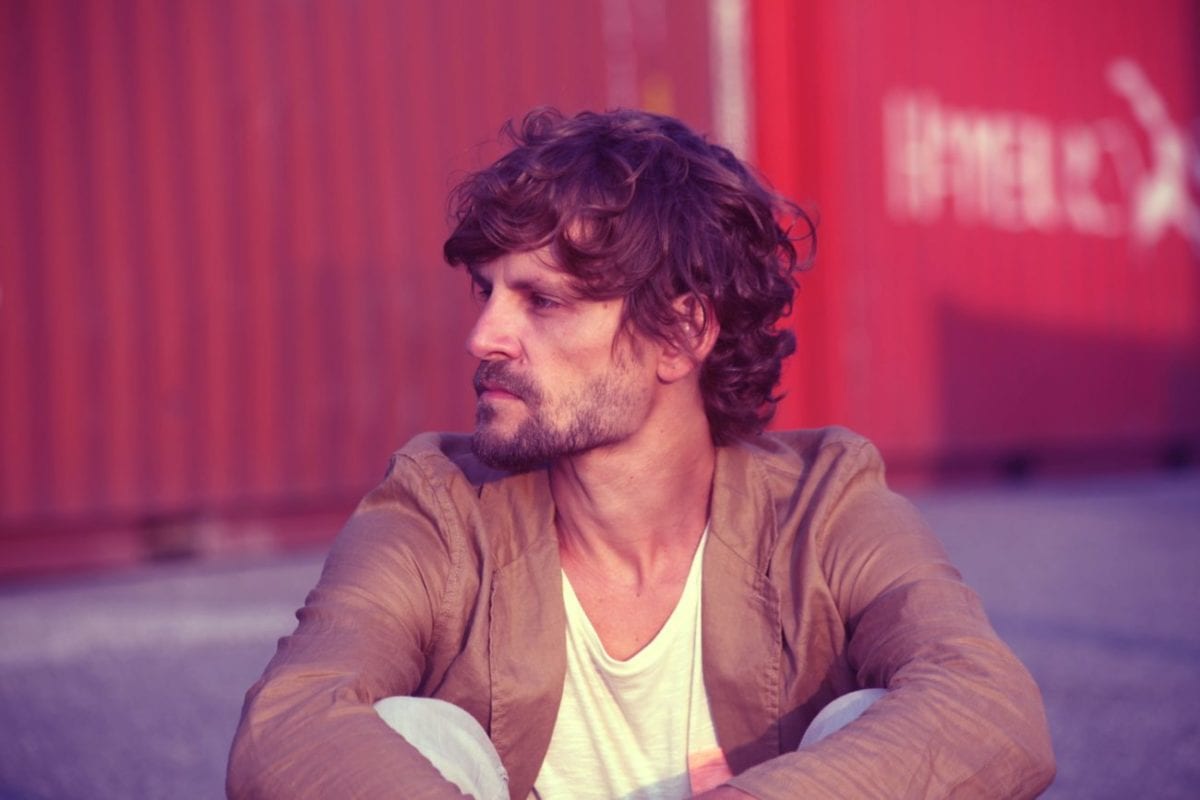 Hailing from Berlin, Dave DKs presence in electronic music has not gone unnoticed. With releases on Moodmusic, Kompakt and now Pampa Records as well as previous residencies at Tresor and legendary Berlin nightclub Panorama Bar, his return to the UK for the first time in 5 years should be something to talk about. We shot some questions over to David ahead of his performance in London to see what he’s been up to, and what the future holds for him. Dave has also compiled a 10 track ambient and electronica mix tape featuring Clara Moto, Adolf Noise, Boards Of Canada, Apparat, Ulrich Schnauss and more.

What have you been up to recently?

I’ve been on a long tour in Latin America, the Caribbean and finally US from February until April, mainly for surfing and sailing, but I played some gigs as well.

Whilst growing up what got you interested in music and experimenting with it?

From the early 90’s on I was following Monika Dietl’s “Big Beat” radio show and later on Marusha’s “Rave Satellite”. Both shows were focused on electronic music and party infos from Berlin. This must have been the starting point of my growing interest in (electronic) music.

I was recording tapes like a maniac, I still have all these boxes stored at home. Speaking of it, I actually have the plan to dig into the collection again to find some forgotten treasures (I came up with that idea after reading Carsten Jost’s interview on IA) . I also recorded my first tracks on tapes after saving up a bunch of cash to buy a second hand sampler, a mixer and a synthesizer.

What were your early clubbing days like? Which clubs did you go to and what music were you into back then?

From 1994 on I started throwing parties in the countryside region north of Berlin where I grew up. At the same time I went to Berlin every now and then to visit the legendary “Bonito House Club” night at Tresor/Globus club. The E-Werk around the corner was also a hot spot to go clubbing. It was very exciting in Berlin during the 90’s as there were numerous underground locations as well, all in the eastern part of the city. No one cared about licenses etc, it was just about raving your ass off.

I wasn’t focused on a certain style during this time, besides the eurodance music and bands like The Shamen or KLF which I had followed already since the late 80’s I was listening to much more electronic music during the 90’s. From the beginning on Tresor club has invited all the highly respected artists from Detroit that I was listening to.

What would you say were the three major influences in the development of your music to date?

The early 90’s was when I discovered electronic music, the time in Berlin when I shared an apartment with Ulrich Schnauss for a while at the end of the 90’s, the city of Berlin itself with its unique club culture.

How profound has the music of Detroit helped shape your music?

It inspired my music to a quite some extend. As mentioned before, I had the chance to see lots of artists from Detroit at Tresor/Globus club, where I got my first residency in 1998. I fell in love with Jeff Mills’ Axis and Purpose Maker labels as well as Kenny Larkin’s and Blake Baxter’s House tracks.

You recently released ʻWoolloomoolooʼ, a split EP with Ricoshei on Pampa Records, how did you get involved with DJ Koze and Marcus Finkʼs label?

I’ve met Stefan (Koze) once in a while in the nightlife. As I went temporary into exile to Hamburg at the end of 2012 for a little change I’m sharing a flat with my friends in the heart of the St Pauli harbour site. It turned out that Rajko (Isolee) life’s just across my place, but in fact we never met before.

During the Kompakt beach party last year at Sonar Kosi has introduced us, and from that time we hang out regularly. So one day I was playing to Rajko that tune and wanted to have his feedback.. In the end it came out on Pampa. I wouldn’t mind another release if it fits the context.

Prior to Pampa you’ve worked closely with a number of labels including Kompakt, Moodmusic, Raum…musik and more. From your experience which labels do you feel have rewarded you most in terms of getting your music out there and for developing your career as a professional musician?

I’m not one of the artists who’s been with his core family since the early beginning. So basically in the end all the labels have brought me to where I’m today. From the musical point of view it was definitely Kompakt and the sound of Cologne that I lost my heart to. I’ve been following the label from the early days on when Mike Ink and his mates released their tracks on Studio 1 and Profan.

You were also resident at Tresor/Globus in Berlin from 1998. Can you tell us why your residency came to an end and perhaps share some of your most memorable moments from those years?

Tresor club asked me to play there on a regularly basis on their house floor called Globus after I had released my first 12″s on Raum…music and Müller Records. My residency simply came to an end after the original Tresor club had to close down in April 2005.

This club has definitely influenced me most for the first couple of years of my DJ career. The “Tresorpark” during the Love Parade was always a highlight at Tresor. For many years Sven Väth used to play an ultra extended 10 hour set there over the whole Sunday on the outside area which was especially decorated for the Love Parade weekend.

I also played one of my longest sets ever during one Love Parade weekend at the club as one artist had a delay or something, I think from 7 am until 3 or 4 pm…unforgettable moments! Even after this it was hard to leave as the atmosphere was just great and we would hang out in the garden area for many more hours.

It’s been 7 years since you released ʻLights And Coloursʼ LP on Moodmusic. Do you have any more records or an album scheduled for release as Dave DK?

I thought I can keep up the 7-year-cycle with my albums. Then I had to release a new one this year. I’m working constantly on new musical ideas, but until they are finally finished it takes quite some time. But there’s an album scheduled for next year, I’m really excited about it. The next release is a remix for the Vilnius based Silence label, should be out these days.

How has your production process developed over the years? Are there any particular methods or instruments that you still want to use?

Though I’m coming from the analog recording background it has never been an easy subject for me. It bothers me when I have a technical problem to solve and can’t find the solution right away. I’m happy that I have enough skills to finalize the ideas by myself. I’m a very diligent producer; sometimes I wish I was a bit more chaotic/adventurous and get faster to the core of the idea to finish it. But it’s hard to look beyond the point and don’t get stuck in your usual production methods.

When it comes to the digital tools I’m quickly overstrained, which means I hardly have the patience to check out new plugin’s and updates or get deeper into them. But I’m using some of them a lot and have honed my skills over the years. It’s crazy what you can do with all that stuff. I’m also using a lot of field recordings to achieve a grounded sound. I’m looking for a new hardware synth to buy at some point as it always brings a fresh wind into the studio. In the end the most important thing for me is the idea that has to be transferred into sound.

Do you have a particular approach to composing music, a particular mind-set or environment that allows you to be more proactive?

I’m a big film music lover, and I like watching movies. I can get very inspired by film music as well as by samples in general. When a little piece of sound touches me I start to imagine a new context to it. Generally I like to work in the studio, in a very nice light room though. I’m always trying to get something done during my trips, but I find it rather hard to concentrate on work when I’m in a cool city or at a nice surf spot. I’d rather enjoy the atmosphere or nature and try to save some of that energy.

How about a philosophy on sound?

I don’t really have a sound philosophy. Maybe rather a goal which could be that I’m always trying to create different emotions in a piece of music. If I don’t feel it I have to skip the idea.

You’ll be playing in London for the first time in 5 years at the Needwant party at Basing House. Are you looking forward to coming back to London? Why is it such a rare occurrence for you to play in the city?

First of all UK has its own very strong music market with many great artists around. Then I was with Air London agency some years ago which helped it a lot to play in the country.

How have you seen the city of Berlin develop as a hotbed for underground music?

I think the rise of the electronic music scene reached its peak around 2000 thanks to big events like Love Parade. Being established since then it attracted many creative people around the world to join the vibe and come over. Surely a lot of the original locations had to make room due to urban development. Compared to other cities you can still find plenty of nice locations that keep the underground spirit alive.

I chose some ambient-electronic tracks that I like to listen to on journeys, in a chilled mood or on a happy spring day when I have butterflies in the stomach.