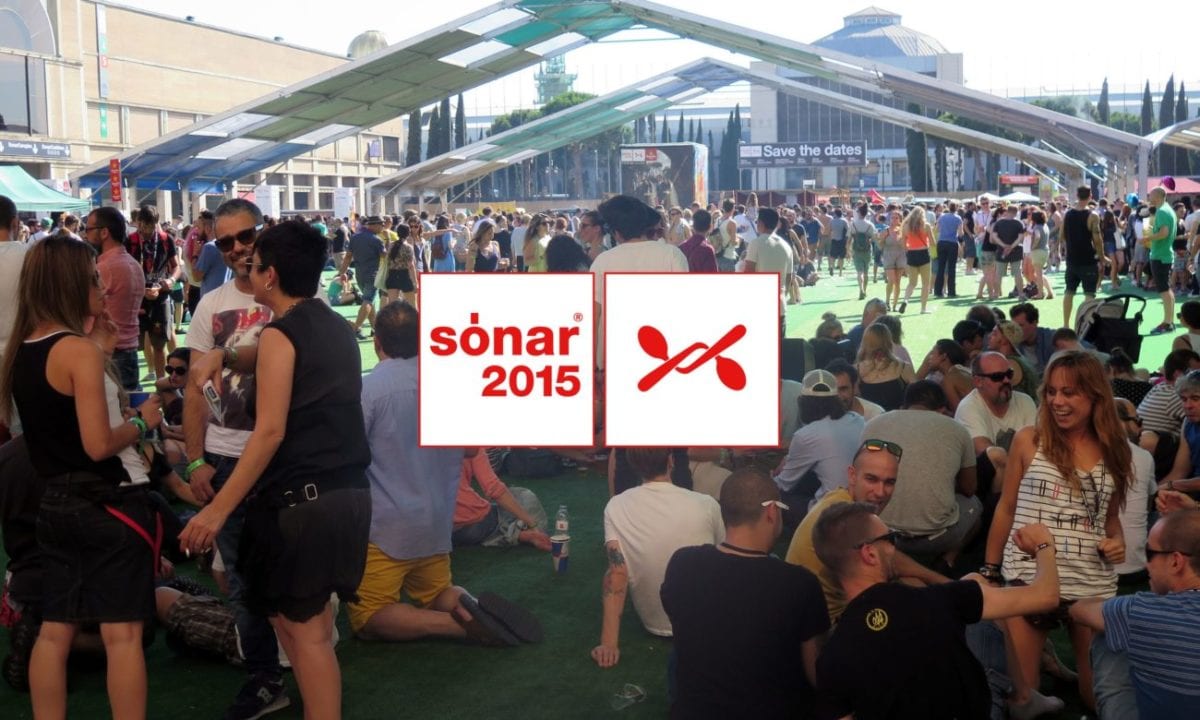 Sónar 2015 felt like the year it came of age, not only because the Barcelona festival passed the 21-year threshold. It’s always been a festival that has positioned itself deftly on the cutting edge, at that crisp intersection between music, creativity and technology (check our review of Sónar+D).

This year it was subtly realised through the introduction of the ‘SonarCashless’ wristband system, totally eradicating the need for a wallet or a need for fear of being taken advantage of by Barcelona’s wiliest pickpockets. Throw in a capacity increase to 185,000, making the ‘By Day’ complex no longer a poor relation, more a twin jewel in the crown of a festival primed for continued cultural excellence.

It meant that the bigger moments were easier to immerse yourself in, no dashing to the bar when an Estrella Damn dude/ette (people with the red barrels fastened to their backs) is on hand in the midst of the crowd so you never have to miss out.

In this feature review both Jehan Harding (JH) and Tom Durston (TD) share their experience of Sónar Festival.

We kicked off our initial experience of Sónar by Day by heading straight to SonarHall to catch Lee Gamble perform live alongside London based visual artist Dave Gaskarth, the mastermind behind several of Gamble’s music videos, most notably ‘Motor System‘. Despite a few technical glitches, and an outright sonic blackout aka power cut, Lee Gamble presented an assortment of new and old material. Gaskarth’s monumental visuals were truly out of this world, giving a much-needed visual respite to Gamble’s performance. (TD) 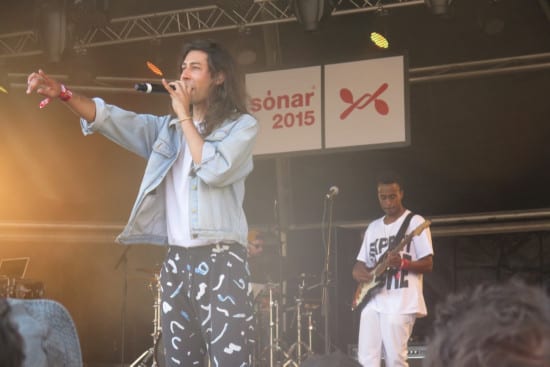 Kindness were up next basking in the sunlight at SonarVillage, effortlessly fusing their pop, soul, r&b, disco and synth-pop sound-blend to the crowd. Their performance brought out the hits and even provoked lead singer Adam Bainbridge to descend into the crowd and sing amongst his revellers. Overall, Kindness delivered a suitably uplifting performance.  (TD) 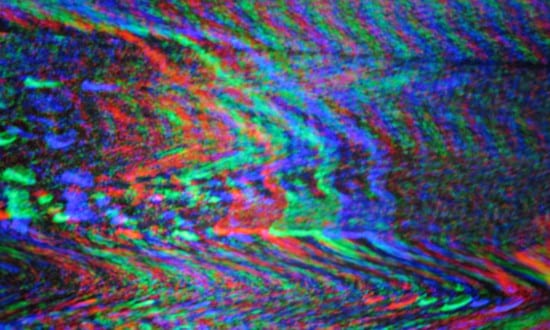 We then headed back into the darkness of SonarHall to experience Atom TM’s blisteringly harsh abstract A/V performance ‘Double Vision‘ alongside Australian visual artist Robin Fox. The visuals were rich and thick with distortion, lasers blasting overhead whilst experimental sounds deconstructed your horizon into the machine like mindset of Uwe Schmidt. His show was intense, acting as an intriguing precursor to his forthcoming album. (TD) 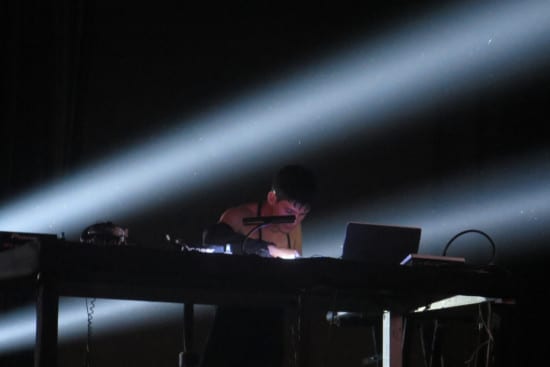 Arca stepped up next in SonarHall alongside visual artist Jesse Kanda. Suitably booted in sparkling thigh-high boots and what appeared to be some kind of apron / nipple tassel ensemble, the Caracas born producer gave it all in his sweltering performance. (TD)

However it was Autechre’s live performance that everyone at Sónar was anticipating. From the moment we walked into SonarHall it was easy to feel Autechre’s influence on the Sónar crowd, most notably the intense wall of heat that bombarded you upon entry. Their show was dark, digital, robotic and intense. The crowd were either lost within the moment or the darkness, nonetheless my trusty iPhone torchlight was essential to make a quick escape. (TD) 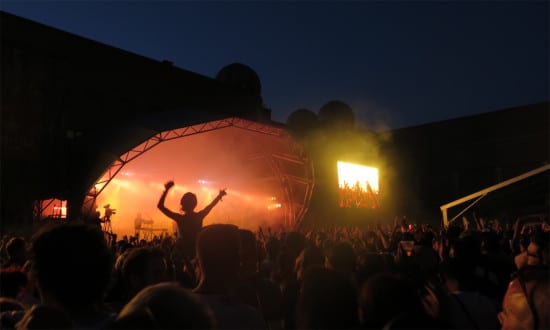 Hot Chip closed out the Thursday night as the sun started to set, making the seamless of transitions to bonafide headliners. Whilst ‘Over and Over‘ remains their prime pop showstopper, ‘One Life Stand‘ ran it impressively close amid a technically accomplished set of rich analogue electronics and dancing. (JH)

After an intense start to the festival, Friday delivered even more for our senses. Those watching Kiasmos on Friday in the revamped SonarHall were treated to a set of tight euphoric electronic music. Instilled with the same glacial coolness and melancholy as Röyksopp, the sound of the Icelandic pair is distilled into a dark tension that reaches for the stars, whilst the music of their Norwegian forebears is about skulking into lonely tenebrous woods. Kiasmos attacked their laptops and assorted gizmos with such intensity and emotion that surrendering all your emotions to the dance floor and cutting loose, despite their simplistic spacey visuals not adding even the slightest touch of emotion. (JH) 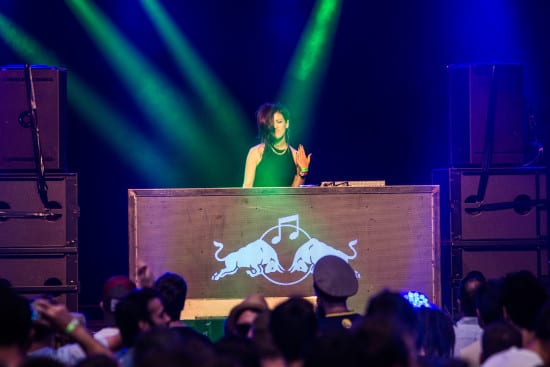 Next up was one of our favourite producers. After recently releasing her debut album on Opal Tapes, Xosar played a live set alongside the New York based musician and visual artist Torn Hawk. Xosar looked particularly elegant amongst an array of Korg Electribe’s. She gracefully unleashed her pummelling 4 / 4 entrancing the crowd with 80’s styled visuals and Techno Viking like dance moves. (TD)

Voices From The Lake’s highly anticipated live show took place within SonarComplex, a sparsely lit auditorium. The duo started off their live show by elevating the atmosphere with rotating projections, enticing the listener into their intense melodic journey. (TD) 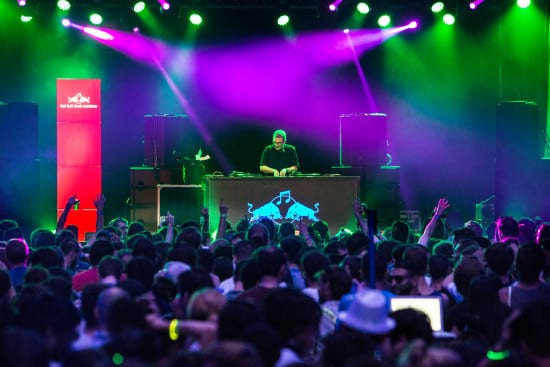 Floating Points over in Red Bull Music Academy SonarDome began by teasing his way through a set of consistently high-grade disco, yearning vocals and vintage beats paving the way for his own analogue numbers to slowly push their way into the congregation. For a good moment you had to wonder if it was going to happen at all, but then the heavens opened with ‘Nuits Sonores’ and ‘King Bromeliad’ proving particular high points. There’s a jazzy poise and elegance to what he does that wasn’t matched by anybody else we saw. The final part of his sermon was a joyous delivery of ‘What’s Goin’ On’. (JH) 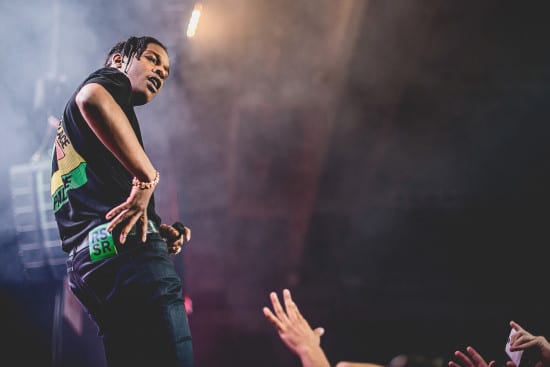 Then after thumbing a taxi from Plaça d’Espanya, we rushed to the sprawling Sónar By Night complex where A$AP Rocky was already starting to tear shit up in the SonarClub. It was an incendiary performance, members of A$AP’s crew strode round the stage with purpose and ferocious energy that came to a head on ‘Wild For The Night’, smoke bursting from the stage as red and gold confetti fell from above: total dance floor chaos ensued and continued throughout ‘Fuckin’ Problems’. (JH) 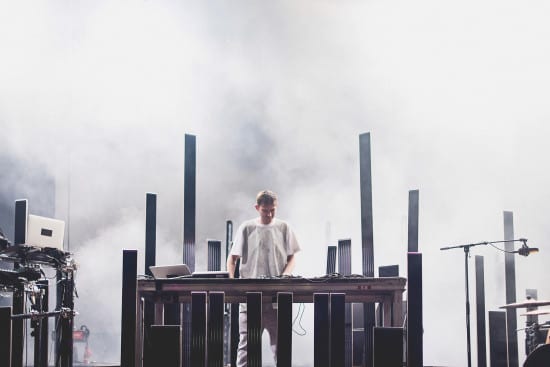 Outdoors, next-door was Hudson Mohawke, fresh from dropping his long awaited sophomore album, “Lantern” on Warp Records. After the vibrancy and power on display from A$AP, he was a little underwhelming in terms of stage presence, but sonically nobody manages to make anything as intricate and ominous as the Glaswegian. I wanted more, it would have been amazing to see the likes of Irfane, Antony Hegarty et al come and add their part and really bring those songs to life, but that isn’t the kind of thing any festival can guarantee. (JH) 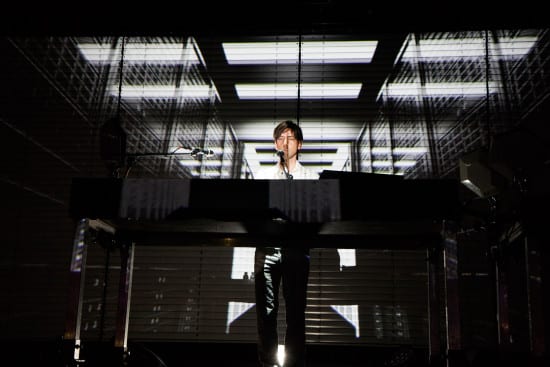 Tiga is somebody who has long agonised over the decision to add live vocals to his performances and take that giant leap into the unknown. He made that leap on Friday night, storming through his wonderfully tight techno electro pop moments, opening with recent banger ‘Bugatti’ and then pushing through a greatest hits set if you will (weird to say this about somebody who has never performed live but there you go), his recent work with Matthew Dear on show alongside older Turbo classics and Sunglasses At Night. The visuals came from Bugatti director, HELMI, and as you might have expected, they were snappy strutting acidy pop-art contortions. Think long legs and calculators. (JH)

The following evening got going around FKA twigs, her trippy sensuously modern RnB bringing a joyous hush over the SonarPub crowd. It wasn’t as captivating as her recent Congreta show, where contortionists abound amidst production values you would expect to see at the ballet, however twigs is still worth seeing even in this downgraded form; uniqueness should be celebrated. (JH) 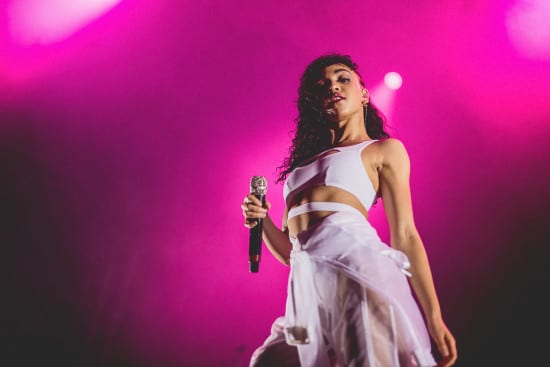 Back in the SonarClub, Erol Alkan was churning out the expressive dark acid that he’s quietly purveyed over the last few years alongside the nurturing of Daniel Avery. When the sound doesn’t cut out midway through, dulling the mood, you could tell that the darkness suits him far better than the Trash era genre melding he used to whip out, fun as that is. (JH) 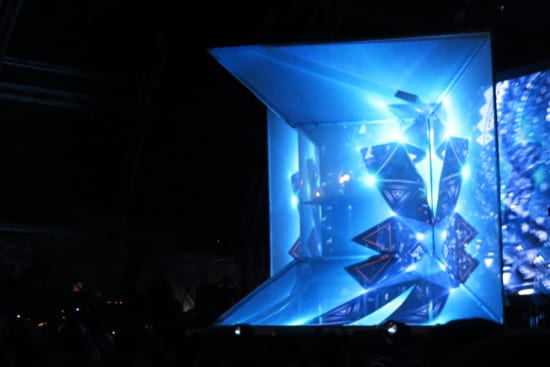 Flying Lotus showcased his audio-visual masterpiece “You’re Dead” at SonarPub. Admitedly it has been a while since I last saw Flying Lotus play, and following this performance…or shall I say spectacle, it is now clear that Flying Lotus is no longer an underground artist. The Flying Lotus we saw at Sónar is a well polished, all-encompassing vivid spectacle of low frequency bass, mescaline induced 360-degree visuals and a fluid chain of well choreographed stage presence. Flying Lotus is very much a headliner and I can’t wait to experience his live show again. (TD)

The Chemical Brothers brought a set you might expect from seasoned festival headliners, turning the club into a sea of energy and all-out pogoing aggression. ‘Hey Boy Hey Girl’ opened proceedings and set the tone for a psychedelic visual show. The light show was positively intense, and set the scene perfectly for the later arrival on stage of the robots. Cue dancing. (JH)

Laurent Garnier closed the festival at the perfect open-air slot, as the night became day in spectacular fashion. This was the highlight, mainly because nothing is more emotional than that transition between day and night. The man is possibly the best DJ in terms of sheer longevity and techno-craft, sustaining quality in both his own productions and spectacular DJ sets. He closed the festival with DJ Rolando’s ‘Knights of the Jaguar’, a perfect techno moment. That was after he threw down ‘Chicago’ by Apres, an homage to Frankie Knuckles offering a slick modern re-spray to the proto-house vibe of Your Love, whilst euphoric waves coursed through the crowd as day broke. (JH) 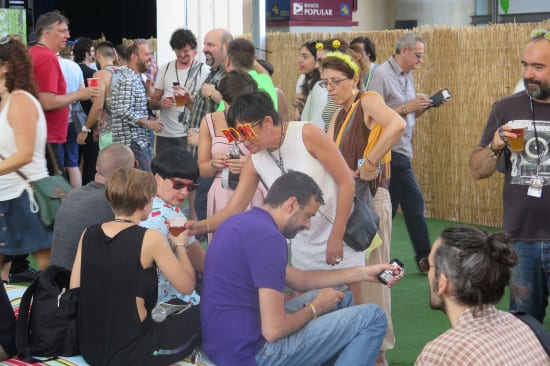