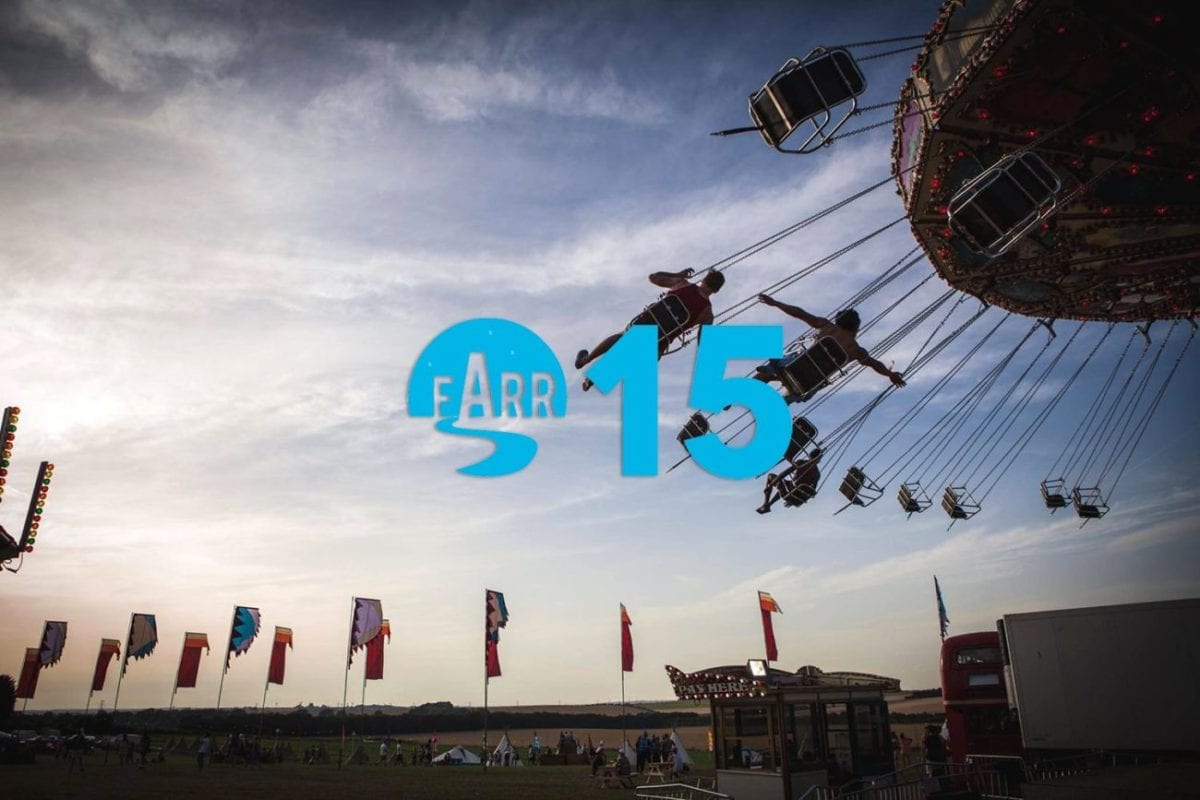 Ahead of Farr Festival, a 3-day boutique festival held within a deserted woodland in Hertfordshire, taking place between 16th – 18th July, we caught up with festival director Oscar Thornton to discuss how he initially got involved with the festival, the challenges he’s faced whilst running it and what he’s got lineup up for the sixth edition of the UK festival.

Farr Festival’s lineup is taking great shape. Can you tell us about your approach to selecting the lineup and how you go about selecting artists – I hope there’s more to it, than just, oh he/she’s alright, let’s get them to play and we’ll sell loads of tickets!

Thank you! We’re pretty excited about the line-up for 2015. It’s a new direction for us, but one I think will pay off. I must admit that programming the festival is one of my favourite aspects of Farr, and actually one of the easier parts. We already have a rough idea of who we want to have in the woods in 2016.

First thing’s first, I’ll speak to the team and then the stage hosts to get a good idea of who they would like in their respective hubs. Farr is very much a collaborative effort. Then by about September time, I’ll start chatting to agents to see who is available, and then it’s time to get my Del Boy on, I love a good barter.

There’s usually a dream DJ or two for me and I’ll try everything in my power to get them to Bygrave Wood. For 2015, this was undoubtedly DJ Koze and I am unbelievably excited to have him secured. It wasn’t easy as we were up against Lovebox, but the heavens were on my side and he picked Farr. YES.

Can you tell us about how you first got involved with Farr Festival?

Whether its been selling fresh fish to my neighbours in Aldeburgh when I was 9, starting a jewellery company at school when I was 14 (a good way to get the girls), to promoting London nightclubs when I was 17, I’ve always been a bit of a wheeler dealer. When I heard that my friend Dom Farr was looking for a nifty way to raise some cash for his village church, I saw a big green field, a magical forest and just thought – party time!

Being school friends with the original Farr Festival organisers must have helped you enormously in regards to building up trust with the Farr family. Would you say that they are totally happy for you to be running the festival? What reservations (if any) did they have when you first got involved?

I’ve organised the festival from the start, so I think the trust has always been there. You’d have to ask them about if they had any reservations about me! It’s been a great journey working so closely with the Farr family and I can’t wait for them to see the new direction we have taken things in for this summer.

Farr Festival is now in it’s sixth year, and this is the first time that Front To Back has been in control of it. How will this year’s edition of Farr differ to previous editions?

Although this will be our biggest year in terms of capacity (4500), it will feel smaller that it has the past couple of years. We’ve lost the big top tents and instead created lots of micro-venues and experiential areas for more of a community feel.

We have consciously not programmed any live bands this year. Although that was always one of my favourite things about the festival, they just don’t seem to work for Farr. It’s so tempting to gaze at other festivals and try to be like them, but we have to play to our strengths.

We’re small, independent and frankly, pretty wild, so 2015 will retain the raucous magic of our first years, but there will be more toilets, no queues into the woods and better security. We’ve also worked really hard to keep the costs of tickets down, I personally believe we’re the best value festival for under £100 in the UK.

If your company Front To Back hadn’t stepped in to take the reigns off Farr Festival, so to speak, what would have happened to it?

It would have been taken over by a big powerhouse festival group, or…come to an end.

Are you concerned that previous festival attendees might not be so into the music programme that has been selected this year?

You’re never going to please everyone, especially these days as the market is so saturated. Yes, we’ve taken the initiative to cut the live acts, but logistically Farr just doesn’t suit a live set up. For me, 2015 is the best lineup that we have ever presented.

I’ve heard that in previous editions of the festival that there was a lack of things to do when music wasn’t being pumped out – What else are you setting up in order to entertain the masses when there’s no music being played?

You’re not wrong! It’s really hard to get everything spot-on when you’re under such a tight budget, especially as punters expect so much now. This year we’re putting in more experiential areas for people to enjoy such as a giant games area, a visual space and an expansion of the secret cinema. This is an area that I’m particularly proud about. We will be premiering short films from London filmmakers, VJ shows and then some silly stuff like Family Guy and Friends.

For anyone thinking of setting up a festival, can you give us a brief break down of how to go about it? Finance, operations, logistics – fire away your top tips!

I think the most important thing you can do is to work out your USP and location. Once you have these, it’s really important to flesh out as many ideas as possible with friends. Get their opinions and see if they think it will work and if they would like to go. If they’re up for it, then you’re getting somewhere.

Then it’s a question of building the right team: get a decent designer who knows what they’re doing on a marketing level and who understands the brand to create a solid ID package that is easily recognisable. Try to be original and not just copy some hip Tumblr page, otherwise, your festival is going to look like the front cover of Jamie Oliver’s new cookbook.

If you’re not one for logistics, cash flows and getting your hands dirty, I would say think twice about starting a festival. It’s not an easy road.

Do you get nervous about the fact that with so many other festivals happening, Farr could easily get lost within the noise.

100%. Especially as there seems to be new festival popping up every weekend, similar in style but with quadruple the budget. What can you do? Stay focussed, don’t get distracted and just work on making Farr the best it can be.

You’ve teamed up with a number of ‘key figures’ in the electronic music culture. Apart from gaining their audience, what else do these partnerships bring to Farr Festival?

It’s not always easy being freelance and working in such a small team. I’ve worked hard on collaborating with lots of people, simply because it amps up the sense of community, and it’s always helpful working with like-minded people. Ransom Note, Corsica Studios and labels like Phantasy, make the journey much more fun. Erol Alkan is a true gent and an inspiration. The bonus is that some of their audience may tag along, but it’s more about what they bring to the table as a brand. It keeps the festival fresh and exciting.

That’s a tough one! One of the big misconceptions we’ve heard this year is that our tickets are over £100. Maybe it’s just the state of the festival market at the moment that high prices are expected, but we want to prioritise good value for money, as well as high quality across the board.

Tell us about how you’ve worked the site for the festival this year?

Once the 2014 dust settled, we took a good look at the site and thought to ourselves, how can we make this better for everybody involved? Not just the festival goers, but the food traders, staff and artists.

The answer mainly lies in the expansion of the woods. The space has now massively increased and will accommodate everyone on site. There will be a greater sense of mystery and we will hark back to our hashtag from a few years ago – Let’s Get Lost!

It also means there will be no queues, which was a big problem last year – it honestly gives me mild anxiety just thinking about it! We have also taken the conscious decision to make the outside arena more enclosed and have created an island in the middle to centralise the festival and stop it being too open.

What if Farr Festival is plummeted with torrential rainfall – what do you have planned in order to keep people happy?

To say we’ve been lucky in the past with weather would be somewhat of an understatement – bar an electrical storm in 2014. However, we do have an adverse weather plan, which factors in things like rain, storms and high winds. If it was to get bad, we are ready to go with trackway. Luckily, all our stages are covered, even in parts of the woods so people can stay dry. Either way, most UK festival goers are usually prepped for the rain.

Who provides the sound and how paramount is sound to you?

Sound is paramount. We have worked with Full Fat Audio from the start as they share the same vision as we do. Each stage has a full Funktion One rig, however we’re still at the mercy of the local council.

Obviously I would crank up the systems to the fullest if I could, but sadly, if we disobey the powers that be, Farr won’t return the following summer. We’re super lucky to still have a 6am license – I personally can’t think of another UK festival who can boast this. So we’ve got to count our blessings!

Last year, I went to about six festivals, all of which had awful sound levels post 11pm. Nothing hurts a festival promoter more, than when they have an act such a Prosumer on stage and the front of house levels are so low you can’t hear the music properly. Sadly, local councils are putting more and more red tape across events, which is making it hard for promoters (and tinnitus!).

When did you first visit the site – and what were your original intentions and visions for the festival?

I first visited the site seven years ago. My original intention was to just throw a little party for our friends. How things have escalated!

Who are you most excited about seeing play at the festival?

Shit, where to start. Prosumer, Roman Flugel and Erol Alkan. There are also some really exciting emerging acts like Bradley Zero, Shanti Celeste, Dan Shake and Cadenza. DJ Koze will be closing the festival on Sunday morning, so catch me at the front hugging a speaker for that one.

What’s does the future hold for Farr Festival?

Not to set sights too high or anything, but we’d like Farr to be the leading electronic music festival in the UK.

Inverted Audio will be at Farr Festival. Catch our resident DJ Antepop play at ‘This Must Be The Place‘ stage hosted by Stamp The Wax on Friday 17th July.