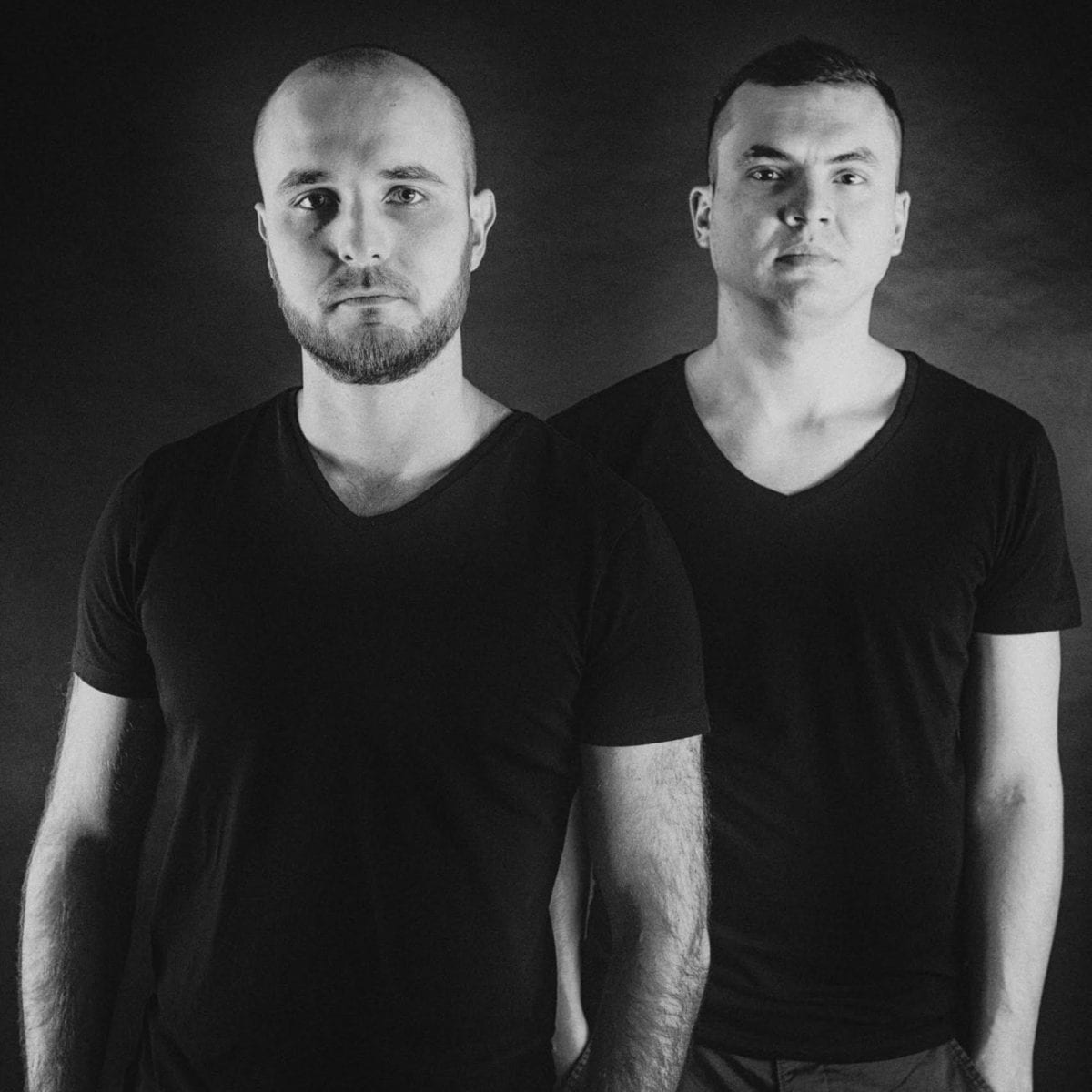 Ahead of their debut live performance in London at We Concur’s 1st Birthday this Saturday at Corsica Studios we caught up with production duo Woo York to discuss how their mutual interest in electronic music at University helped develop both their friendship and experimentations with Ableton. Denys and Andrii also pick out their most memorable records to date, and briefly share their thoughts about the political situation in the Ukraine.

You’re playing at We Concur this Saturday, which is your London debut. What’s your understanding of clubbing in London? Do you think London’s electronic music culture differs much to the rest of the world?

Denys Andriyano: I would like to point out that not only is that our debut performance in London, but it’s also our very first visit there in general. Hence, why we are not that much familiar with what’s going on there and can’t [obviously] form an objective opinion yet. However, we do know that there are numerous interesting events happening in the city on a weekly basis, and it’s generally considered to be one of Europe’s most thriving cities when it comes to club scene, alongside Berlin, Paris and Amsterdam.

Corsica Studios is one of London’s most respected venues for underground electronic music, what expectations do you have about playing at the club?

Denys: We have heard only good things about Corsica Studios and are thrilled to be able to play there. Proper line-up, decent sound system, intimate atmosphere – what else could we ask for?

Andrii Vanzhula: We both feel nervous and curious before every single gig of ours. Every time is a chance to get to know the club and its audience, so we naturally anticipate gaining listener’s attention and try making them familiar with our music. This gig is not an exception, so we would like the crowd to ‘dive’ into our sound big time, their honest feedback being the best reward for us.

You’re also playing live, tell me about your live setup and how you balance the workload when performing?

Denys: Our setup consists of a Roland TR-8, xoxbox (emulation of Roland TB-303), MXR M-104 Distortion, Mooer Pure Boost, LuSH-101 (emulation of Roland SH-101), RNC1773, NI Mashcine, and Ableton. All signals are being summed out of box on mixing console. I am responsible for mixing and arrangements through the mixing console, and also for drums and main synth lines and loops; Andrii is taking care of ‘acid’ lines and SH-101 sounds synthesis, as well as effects.

How did the two of you meet? What provoked you to start creating music together?

Denys: We have known each other since attending University together and living on the same floor in the student dormitory. It all started out for us when we decided to learn how Ableton works, we would try getting some sounds out of the computer and then exchange our experience and impression with each other. At the time we didn’t even think we would someday reach the pro level, as we used to think of it as fun and a simple desire to find out ‘how this works’.

Andrii: We shared mutual interests while being students, electronic music being one of them. Naturally, we started going out to the clubs, looking for and exchanging new music. Then we decided to become DJs, bought Technics turntables and our first vinyl records. But this didn’t’t last long in the end, as we developed our interest in music into something else, and that’s when the Ableton Live shortcut first appeared on our desktop. I think that was the turning point.

What’s the story behind the name ‘Woo York’?

Denys: We just wanted to pick up the unique name that would sound good and couldn’t be translated. The actual story behind it is yet to be revealed.

You’re both from Kiev, Ukraine. Are you both still living there or have you relocated elsewhere due to the current political situation?

Andrii: We consider Kiev to be our second home where we moved in at certain point. Good times were had here… After graduating the university, we both started IT careers here, so at the time being we’re pretty much tied with this place.

Denys: Actually, we’re not from Kiev. Andrii was born in Kremenchug, and I am from the city of Rivne in the Western Ukraine. We both moved to Kiev after school and then decided to stay here for good after the University.

It feels like home here, as Kiev is such a beautiful city, especially in Spring. Of course, it’s not that we’re not thinking of relocating to some other place going forward at all, with the number of gigs going higher, we might move to Berlin or some other European city. But it’s not the matter of closest future, as we’re really happy to be here and feel like we’re in the right place, despite the situation our country is currently facing.

I’m interested to hear your thoughts about what is happening in the Ukraine and how it has affected you?

Denys: Ukraine has had a revolution that resulted in people overthrowing the thief crew of the former president Yanukovich. Unfortunately, while our country was weakened by these events, the neighbouring powerful state used this opportunity and invaded Ukraine, which further lead to annexation of Crimea and initiation of the crisis in the Eastern part of the country.

The latter has developed into a full-scale war that is still happening there. Of course, this whole situation is of huge concern for us, and we could only hope for this to end as soon as possible. I don’t actually feel comfortable enough discussing this, as the subject matter is rather traumatic. What I will say though is that I hope Ukraine will end up being strong enough to live through these difficult times.

How did you go about discovering new music?

Denys: We have lots of music lovers and musicians / producers among our close circle of friends, so it is common for us to meet up and discuss music we all come across. Apart from that, we try to follow the labels and the artists we admire on social media.

You’ve released a huge amount of 12″s and EP’s since 2009. Which records stand out the most to you?

Andrii: I would say the first release is the most special. Though every record is a special occasion of sorts, and each of them has its own context and story behind it. Take our latest release for Life And Death as an example; it is a result of Denys’s marriage, basically. After he got married, we have spent some time on Mallorca together with our friends. It was right after this vacation when we made those tunes.

Denys: The last few years seem to have been very productive for us. We have finished numerous tracks that are either released or yet to be released. For instance…

I wrote the main synth line for this tune when I met my girlfriend Oksana who is now my wife. Pure romance and tenderness.

You probably understand from the track’s name that it is about protest. In this particular case, it is a protest against injustice, corruption and rowdy actions of former Ukrainian authorities. It was influenced by Maidan events of 2013/2014.

The Valley of Songs

This is a special tune inspired by the time spent on the beautiful island of Mallorca. We would just stare at the stars and drink whisky next to the pool in absolute silence there.

How do you operate in the studio? Who is responsible for what and do you have a tried and tested formula for writing music?

Denys: Most of the time it is either of us making some synth sketches that then working on them when we gather at my home studio. We connect TR-8, xoxbox and start experimenting with those pieces, then occasionally some idea gets born and we just press ‘rec’ and do the whole track on the fly. This may be repeated several times before we actually feel happy with the result.

Andrii: The vast majority of ideas that later get finalised originate during our gig preparations and studio sessions. Our live set consists of both pre-recorded pieces and improvisational stuff. These improvisations represent our new patterns, or our sound synthesis attempts if I may. Being able to try them out during gigs is priceless, as we have a chance to find out which ones are worth being worked on going forward and thus being developed into a complete composition.

Denys: We have enough unreleased material to fit in an album format, but we just don’t feel ready yet. Someday…

Andrii: We don’t feel concerned that much by the “click + skip” part. An album is some sort of a line that you draw under the output of your work as a musician. It should represent significant piece of work that is both mature and integrated. I consider this an opportunity to give our listener even more emotional tones. At the moment we’re still focused on recording EPs and widening our audience, as the album takes time.

What other musicians and producers are you into right now?

Denys: Rodhad and Zadig are the dudes who we’re excited about the most currently; they are excellent both as producers and DJs. Zadig has also done a remix for our next EP.

Finally what’s next for Woo York?

Denys: Release-wise, we’ll be announcing our next Soma EP soon; it will contain two original tracks and that remix I mentioned previously. Apart from that, we’re also in the middle of negotiations with one excellent techno label, but we’re not allowed to reveal that yet, it’s a top-secret thing. Obviously, we’re very much looking forward to our future gigs in London, Vicenza, Finland, at Off Sonar and Robert Johnson as part of Life And Death showcases, and also in our lovely city of Kiev.

Woo York play live on Saturday 18th April for We Concur’s 1st Birthday at Corsica Studio alongside Terence Fixmer and Redshape. Tickets are available to buy via Resident Advisor.

Discover more about Woo York and We Concur on Inverted Audio.