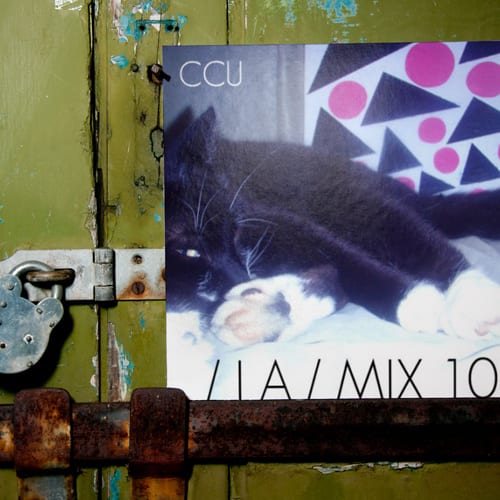 Christian Jay Sienkiewicz is the man behind Coyote Clean Up, he’s from Detroit and I think you’ll agree from reading his interview on IA he’s a little crazy. Despite this Christian and his cat Linus have managed to whip up a stunning mix for Inverted Audio. Featuring tracks from Moodyman, the Rolling Stones and Womack & Womack, this is set to your party off.

“I DJ out time to time but I do the late night bedroom, garage, or basement mixes. This mix is just something to bang however you like. You’ll probably have to tweak out your stereo or mixer or what not, pump up the terrible. It’s a bit blown out, like deep in a live mix”.

IA: What’s your name and where do you come from?

IA: Whats your musical background, how did get involved with music?

CCU: My parents had records, listened to the radio, watched MTV starting the early 80’s, we had an electric air organ and a dope record player in my basement. In the 90’s I started making mixtapes, playing in punk bands, spinning records, making experimental recordings, etc. I was in choir in high school, but that’s the only training I’ve had though all my friends have dope skills.

IA: What was the first record you bought?

CCU: Whitney Houston “I Wanna Dance With Somebody” 45 7″ in 1986-7. I was 4 or 5! My mom took me the record store and said I could pick out whatever I wanted. This is back when I lived in Cleveland, I was born in Cleveland and moved to Metro Detroit in 1989 with my family. My mom bought me a Yo! MTV RAPS tape cassette that year. It was dope.

IA: Tell us about Detroit and it’s influence on your music.

CCU: It’s crazy. Right when I moved here the radio was just banging, with hip-hop, R&B, alternative, new-wavey-brit-pop stuff. And all kind of Detroit stuff. Later I started playing in punk kinda bands, but we’d play reggae dub, and weird post-stuff. There’s always a weird and big underground scene going on in Detroit. In the mid to late 90’s a bunch of my buddies started playing raves and shit. I was more into weird minimal shit at the time. But the raves were wild, as you can imagine. Now a days, it’s super awesome. All the old school House dudes, the legends, spinning all the time. I seen em all and talk to a bunch, they’re next level. And of course the hip-hop scene and the DJs. Records everywhere. Too much awesomeness to go around.

IA: Your music ranges from experimental abstract sounds to some almost techno beats, what has helped forge these sounds?

CCU: Late 90’s I was making analog recordings with tapes, an old Rhythm Ace, CasioTone, Bass, Korg Delta, Guitars, Amp FX, and records. Sometimes I’d just zone out and get real wierd. Making weird ambiet tapes. I lived in chicago for year and learned all this digital stuff from my buddy. And their was that post rock stuff going on. Moved back to Detroit for like 5 years by myself in this big old apartment and just got real deep in my own world. Score a Nickle, buy a record at the first People’s Record location, come home, and lock myself in the dub dungeon. But the techno beats, that was always around. Banging on the street, in the club, buddies with 808’s, techno records, etc. It comes natural out here!

IA: Would you still live in Detroit if it got back to Mo Town boom times?

CCU: Can’t even imagine. Seen pictures, and it’s mind blowing. I live here now, so for sure back then!

IA: Who has influenced you / inspired you to make music?

CCU: All the people putting out records, writing songs and playing em, all the dope DJs, people dancing, good times, Bob Marley, all my friends, the list goes on and on. I just love the sound.

IA: What has been the biggest challenge for you so far to get to where you are now?

CCU: Just your typical technological, financial, resources, and the Man. I love doing this, so this is how I gotta do my thing.

IA: Coyote Clean Up, bit of a random combination of words, what’s that all about?

IA: What other artists have you worked with / who would you want to work with?

CCU: I have a crew I play with all the time. Everyone plays multiple things and we jam it out in a funky little reggae party style all the time. Then we play live shows. It’s dope. Lately been doing lots of Edits and Dubs for fun with rad people, and I’ll keep that up. Whatever happens happens and I suspect it will be ill.

IA: What producers / DJ’s would reccomend at the very moment?

CCU: All the Detroit cats, the old ones, the new ones. I’m down with all the UK shit. There’s good stuff all over; Finland, all of Europe. Dig it a..

IA: How do you make your music?

IA: When it comes to making music Digital or hardware?

CCU: Everything and all for sure. No holds barred.

IA: If you could have any piece of hardware / instrument what would it be?

IA: What record label really stands out to you / would you want to release on?

CCU: Man, there are tons. I’d like to get out to the UK. I just wanna put out heavy wax.

IA: Where wil Coyote Clean Up be in the next 5 years?

IA: Thanks a lot for the mix and for talking to us Ice Cold Chrissy, keep spinning those tunes!