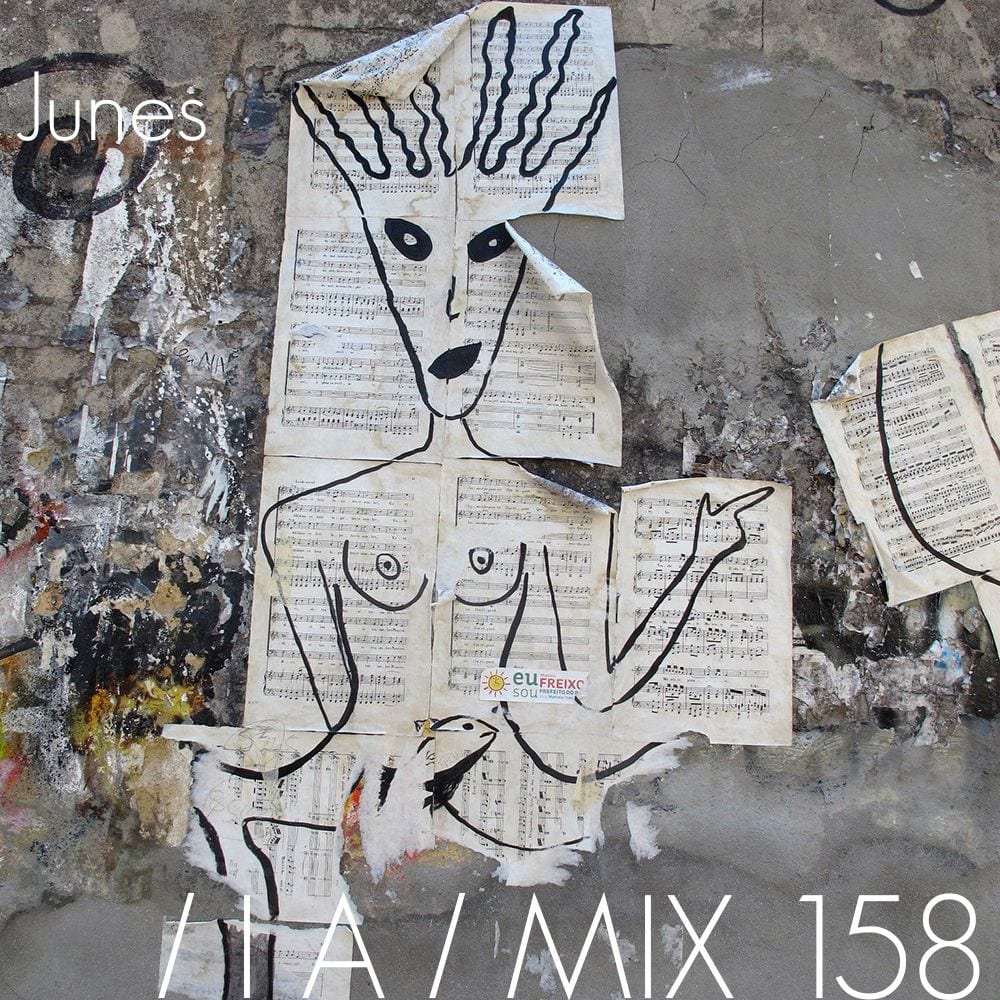 Ahead of Bixon’s 3rd Birthday this Friday at BarABar in Stoke Newington, we caught up with Berlin based DJ and producer Junes, real name Neil McDermott, to discuss his latest record ‘Root Pattern‘, his first steps into making music and DJing, his favourite hangouts in Berlin and what the future holds for his record label Galdoors.

Hi Neil, thanks for recording your mix, can you tell us more about how you made it, where and how it was recorded and how you decided upon the tracks you’ve included?

I selected a bunch of records that I’m really into at the moment and recorded the mix at home on my 1210s. It’s a mix of some new stuff that I’m feeling and some older records I’ve had for a while, some contrasting styles but hopefully they sit well together.

Is this mix reflective of what you’ll be playing at Bixon this Friday or is it more just what you were feeling at the time?

I guess both, although at a party it’s more dependent on the mood of the crowd.

Being Bixon’s 3rd birthday party on Friday, can you tell us about your relationship with Bixon?

I know Jamie and Lorcan from when I was at university in Leeds. Jamie moved to Berlin shortly after I did, we were hanging out over here and they invited me to play at their 2nd Birthday in Edinburgh. After that we did the Galdoors party with them in London this time last year – so we’ve definitely got a good connection and respect for what each other are doing.

How long have you been living in Berlin for and what initially lured you to the capital?

I’ve been living here coming up to two years now. I’d visited Berlin several times before deciding to move here, Berlin was always the one place I’d been outside of the UK that I could really envision myself living in. I was attracted to living in a different culture, the relaxed atmosphere, the space, the freedoms, the history, and of course Berlin being a hub of the electronic music scene.

What’s the biggest misconception about living in Berlin?

I’m not really sure, I think it’s a really multifaceted place, there is something for everyone here and everyone’s perceptions are different. The winters aren’t actually that bad, or haven’t been yet.

Whilst growing up, lets say your mid-teenage years, what records and record labels stood out to you?

As a teen I was listening to all sorts, as my Dad is really big on music and has an encyclopaedic knowledge of the 60’s and 70’s. I’d listen to some stuff I picked up off him; I liked a lot the Philadelphia soul sound and had a heavy Beatles stage. I was also big on hip-hop for a while; Guru’s first Jazzmatazz album stands out for me from that time.

I started getting fed my first interactions with “underground” electronic music by my brother and his friend Jamie. They had begun DJing, playing a lot of jacking house stuff like Sneak and Derrick Carter, and I was slowly catching on. When I started going out to clubs to hear it properly and experience the culture I was hooked and went off in my own direction.

Before setting up Galdoors were you DJing or working in the music industry?

Myself and Ian were both residents of a night called Twaddle in Leeds that was run by friends, it was a real family affair and a raucous, intimate party atmosphere. I started playing around making tracks when I was around 17 or 18, it was a long process though as my musical tastes were changing a lot and it took some time to find out was it was I wanted to do.

What prompted you and your brother to start the label?

We got left some money by our Grandparents, and it seemed like a good time to get the ball rolling with a label. It made a lot of sense as we were getting to a point of confidence with our own productions and were fortunate enough to be friends with some established producers that wanted to be a part of it. We had an identity for the label too, Galdoors would keep the name of our grandparents’ former business, which made a lot of decisions about how it should be presented and the general ethos of the label easier to make.

Being just the two of you, do you share all label work or do you look after separate tasks?

We generally share stuff out between us; Ian would probably say he does more of the dirty work – that’s not true.

For those thinking of setting up their own record label, what points of advice would you give?

I would say take your time, these things can take a while to come together and you don’t want to rush into it.

Do you think it’s important for a record label to have a certain ideology or concept?

Not necessarily, good music is good music I don’t think it matters if it has been presented in line with a certain concept or not. It’s definitely nice if it’s being presented with care and meaning though.

How do you go about discovering new music? What is it that you look for in an artist and their music?

Mainly just through record shopping, either in-store or online. I don’t think that I look out for anything in particular in an artist, I like to keep it open minded, not think too much about what exactly it is that I like and just go with what sounds good to me at the time. If I come across something new that really strikes, then I’ll check out the other stuff from the label and the artist.

How have you gone about selecting artists for Galdoors?

The artists kind of selected themselves, it wasn’t really something we had to go into great deliberation over. We’re all close friends – Audio Werner we met through the Twaddle parties in Leeds, same with Leif, Elgato went to school with Ian – I think everyone involved so far has a really strong connection to what we’re doing and add their own unique touch to the story.

Do you have an extensive release schedule of producers that you’ve been working closely with or is it just a case of releasing what you like at ‘that’ moment?

No extensive release schedule, we tend to work on each release as it comes – when it’s good for us and for our artists. It has to work that way, as we want every record that we put out to have a lot of care and attention put into it, and if you’re already thinking about the next release then that could affect the quality.

Do you plan to release albums as well as EPs?

We don’t have any plans for albums at the moment, but I wouldn’t rule it out for the future. If the right thing comes along, or if Ian or I ever wanted to release one, I’m sure we’d be open to the idea but it is not something that’s currently on our radar.

Where are your top places in Berlin for; record store, restaurant / bar, club, park, gallery, off the beaten track hidden gem?

Spacehall, Weltrestaurant Markthalle (get the schnitzel) , Panoramabar, Templehof, not sure about a gallery, Körner park in Neukölln.

Tell me about your latest ‘Root Pattern’ 12” on Galdoors. What do these tracks mean to you? Are they a direct reflection of a particular moment, or experiments that you built upon?

I’m really happy with this release, I definitely feel very connected to it. ‘Root Pattern’ in some ways is my favourite track that I’ve made so far, I wanted to do something with more garagey drums but placing them into a different environment with another soundscape, combining different influences together.

‘Transfer’ and ‘Iced’ are inspired by the freakier sounds of the techno scene in Berlin, but with a more houseier aesthetic. I could never really get with techno before, I hadn’t really had much exposure to it and, when I had, it was never really the right environment.

I think it makes a massive difference where/how you listen to certain styles of music – after a stint downstairs in Berghain, I definitely “got” techno. I had a particularly revelatory night there earlier this year – I wrote ‘Iced’ shortly afterwards, I wanted to have some aspects of that sound but more in my own style, something very dancefloor orientated that could work in a big room as well as a small one. I think there is a common theme running throughout each track, even though they’re each offering something quite different.

What’s next for you and Galdoors?

With Galdoors we’re just going to continue putting out records one at a time, building on what we’re doing and having a lot of fun on the way. Personally I don’t have many plans other than to continue releasing on Galdoors, if something with another label comes up and feels right I wouldn’t be against it but I’d like to keep these things personal and organic.

‘Root Pattern’ EP is out now on Galdoors, order a vinyl copy from Boomkat.

Discover more about Junes, Galdoors and Bixon on Inverted Audio.