Ever since Lyra Valenza stuck us up at gunpoint in 2018 via their’Scan, Deliver‘ collaboration with Opal Tapes, the Danish duo have been a firm favourite for many. Their signature sound carries notes of classic and modern UK dance, a little techno here and there, and a dash of euro-trance (both the good and the silly kind).

Despite the great efforts put into the Lyra Valenza project, Jens Konrad and Hjalte are far from one-trick ponies, as evidenced in the formations of Yelzin (Hjalte’s solo project), the ex-project Severin, and the newest, Senso (originally a fun electronic pop set up, now, to quote, a “proper” pop/rock band).

The production duo’s Copenhagen-based imprint Petrola 80 is a personally-written handbook to the city’s artists both above board (Minais B, jjjacob, Astrid Sonne), and the underground (Mussi, H2OP) — and of course venturing further afield, with music from Opal Tapes’ label boss Basic House and Peach Discs co-founder Gramrcy gracing their excellent trilogy of compilation albums.

Longstanding friends, their love and kinship is self-evident in their beaming faces during live or DJ performances — a fact I can attest to after witnessing the duo perform at Lunchmeat 2021 – where their live set accumulated to a 5-minute applause and eventual encore. We’ve adored them from the start and we’re elated to feature them on the IA MIX Series.

In the interview below you’ll find tasty nuggets about Senso’s evolution and their Garage Band classic rock beginnings, plus some hot tips on the eclectic Danish underground. In their mix, Lyra Valenza deliver an hour of jacking club tunes the pair have been playing, and a whole heap of fun. But, you’re probably stuck into that already. 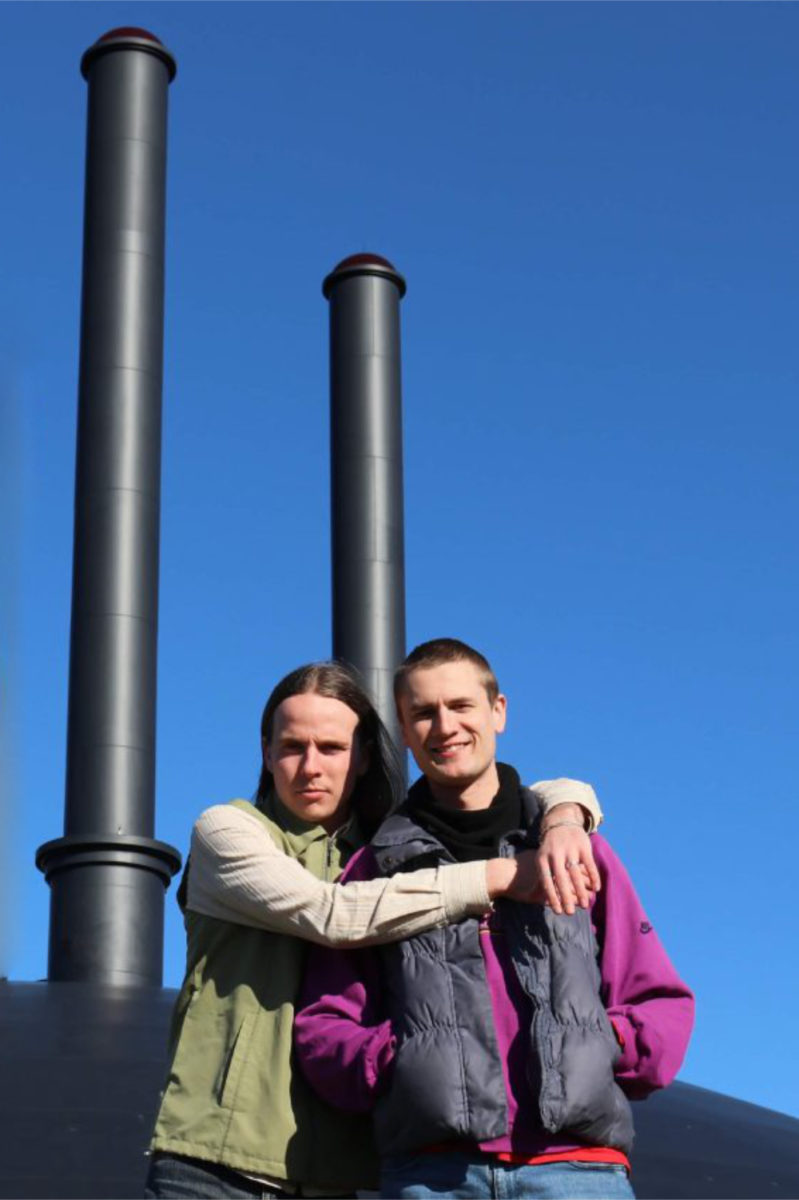 Hello! Firstly, thank you for your mix – we aren’t surprised at all that it’s massive. Can you talk us through some of your personal highlights from the track list?

Jens: Some of my personal favourites from the mix are the new local projects Debbie Sings and Aperly High. Both have been slaying it live recently in Copenhagen/Denmark. We are releasing Aperly High’s debut EP on Petrola 80 later this year, and Debbie Sings is working on new material too, so look out for that shit!

Hjalte: I’ve really listened a lot to bassy stuff for the past year. So for me it’s tracks like Cegetel – Simo Cell, Deep Insight – A.Fruit, Stagger – Imajika and Restless Leg Syndome – Chimpo. I also really like the iPhone track! And the local stuff too.

There always seems to be a thread of breaky ravey, 90’s UK goodness in the music you both make, and select to play. We’ve been in touch for a few years, and now is our chance to finally crack open the lid on that — where did the love for that come from?

Jens: We produced and DJ’ed a lot of techno In the beginning, but we simply got tired of the repetition of the genre. After that I think we started looking for the most extreme tempos, aesthetics and complex rhythms we could find, and some of it we found in UK rave stuff. I come from a punk background so maybe that’s why I love all things raw and fucked up haha.

Hjalte: I just love rhythms. And so did people in the 90’s. Maybe there’s a connection.

You’re both based in Copenhagen, where the scene is (currently) known for its straight-to-the-bloodstream fast paced trance/techno hybrids. Who are some names from the CPH scene that fit more into your style than the breakneck rave material?

Jens: I’d say Deb Foam is one of the most promising names in the bass field on the CPH scene right now, and she is definitely worth checking out. And DJ wise N.E. Girl is probably the DJ i’ve been stealing most track ID’s from the last couple years haha.

Hjalte: I really like Tettix Hexer and his production style. Hypergaze extravagnza I would say. A lot of great tunes has come from Perko too! And Popmix and the rest of the crew from Axces.

How did the pair of you begin with music? Is there a classically trained pianist hiding behind the rave synths, or a conservatoire-jazz drummer tuning drum machines now?

Jens: I’m originally a drummer, and began with playing in various punk bands throughout my early teens. I played jazz drums in the High School big band, so the last one’s actually quite close!

But even before that, Hjalte and I played Guns N’ Roses and AC/DC covers together in my parents’ basement, so you could say that it was actually the beginning of Lyra Valenza! I still don’t like AC/DC though, I guess that one will have to be on Hjalte, sorry mate… personally I’m more into Rammstein.

Hjalte: I started out as a guitarist, then I turned my attention to the piano and later it was drum programming. You don’t have to go to the conservatory to play jazz. I like Rammstein too. But I’m not that fond of neither AC/DC nor Guns’n’Roses.

Jens: I still think some Guns N’ Roses are banging!

Back to the mix — once again, really wild music across such a spread of flavours. Is this more of a studio mix, or a jam/reflection of what audiences can expect to hear in a rave?

Jens: I’d say it’s a mix! (lol!) There are many tracks in there that we have been playing out, but there is also passages of the mix that is definitely more of a mix experiment, I’d say. We love dubstep but we usually don’t play so much dubstep in Lyra Valenza club sets. Besides Skrillex of course!!!

Hjalte: I guess you could view it as a glimpse of stuff we like at the moment. Sharing music we’ve stumbled upon.

I was fortunate to have caught your live set in Prague at Lunchmeat Festival 2021 — in that, you played a number of tracks (I tell myself that) I recognised, and a host of new ones. It’s been a (far too) long time since the last Lyra Valenza release — tell us some good news?

Jens: Yeah in that set there were several tracks from our debut album which is getting mastered as we speak!!! Very exxxciting!

Recently, the band Senso appeared out of the Lyra Valenza duo, with a few new faces (to us) joining to make the band. Can you tell us a little about that project, and the members also involved?

Jens: I started singing over some new Lyra Valenza sketches in 2018 and we performed some of them live with LV but somehow it didn’t really fit In the project, especially not in a live context. The song ‘Remedy’ from the first Senso EP released on Petrola 80 was originally a Lyra Valenza tune, and I believe fans of Yelzin will definitely hear his touch on the production.

Later on we made Senso into a proper band with Albert (Aperly High) on guitar/synth Mads (from Danish band Lød) on drums and Sofie (from Danish band Deadpan) on bass and we released our debut album this year and played a lot of shows in Denmark including the biggest music festival, Roskilde.

You also recently culminated a trio of tape release on your label Petrola 80, with the last one being a kind of crash-course in Copenhagen and Danish dance and experimental music, with collaboration being the key point of this tape. Can you talk us through that trilogy, and what you hoped to achieve with it?

Jens: The concept of the trilogy ‘Embrace, Expand, Exchange’ was to embrace Petrola 80’s surrounding community, expand its horizon and invite artists to Exchange ideas with each other. We wanted to present other genres and styles of music to the international audience of Petrola 80, and to celebrate the beauty of collaboration projects.

I’m very happy to know that the ‘Exchange’ compilation helped inspiring the new open-for-all collaboration platform Wheelie Extender Group, which I can recommend checking out, and eventually signing up for if someone out there is looking for other artists to collaborate with. Many amazing artists including ML Buch, Minais B, Smerz and of course Yelzin contributed to that project so far.

Hjalte: What he said.

Is collaboration a key point of the Danish scene in general? It seems that it’s the right size scene/city that people tend to know one another, and work with each other in different ways.

Jens: Yes I definitely think there is a lot of community and collaboration in the electronic scene especially, it’s much better than it was a few years ago. I still think there is some competition going on, and people feeling they are too cool for each other, but I guess you will find that everywhere, and especially in the larger cities in Europe, I believe. I think we can all work on that one, myself included.

Hjalte: There really is a lot of talented composers and producers in and around Copenhagen and in Denmark in general. And a lot of different styles to find too. Copenhagen is a big village. Especially when it comes to the music scene. Everyone knows everyone.