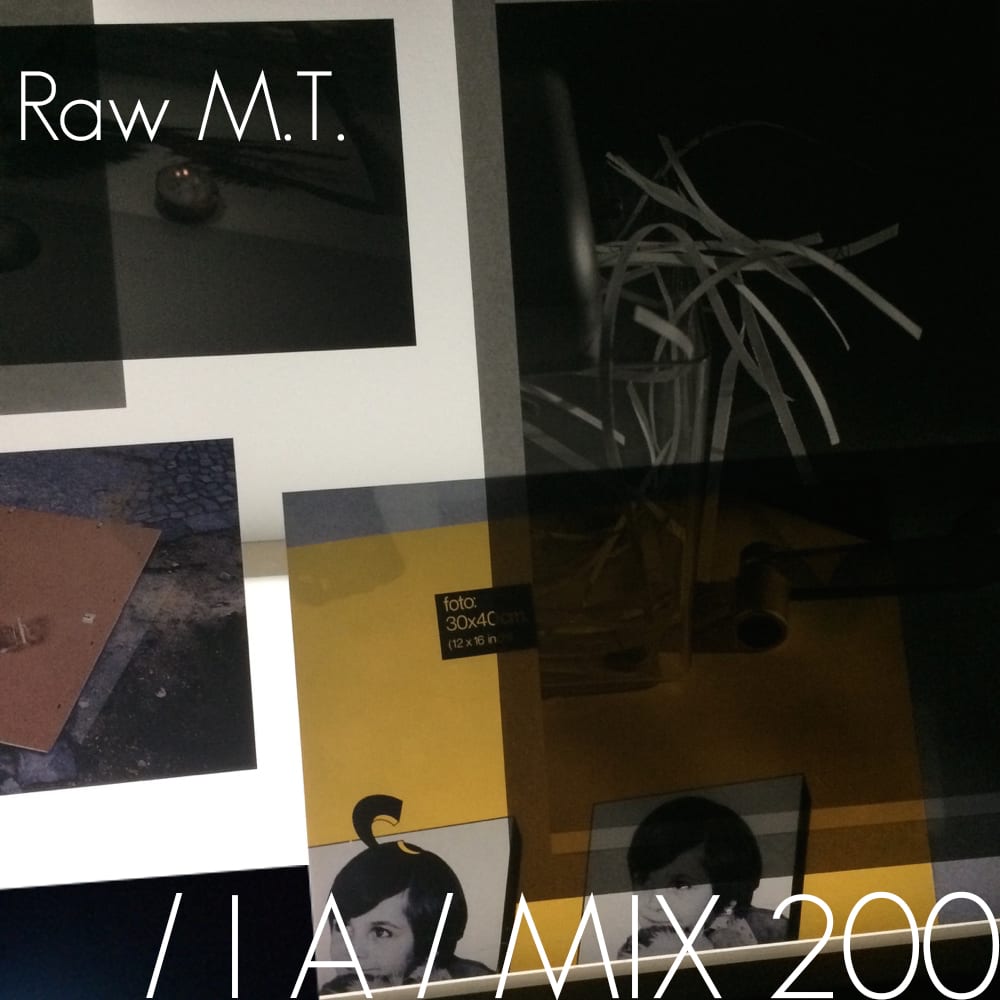 Christmas is coming and we’ve got a smashing present for you! Grab your party hat and pop the streamers, we’re celebrating our 200th mix with a very special delivery, courtesy of one of our most favourite producers from the last couple of years aka epic lo-fi pyrotechnist and husky scrum-wrecker Raw M.T.

Back from a year of 2014 which remained blank of any output on his end, the Italian producer finally made a winning return this year with three subtle floor-igniters including the brilliant ‘La Duna‘ for Lobster Theremin’s sister label Mörk. But hey, 2015’s coming to a closure real fast so you know what to do next: it’s time to get locked!

Hey Giorgio! Thanks for being our special guest for our 200th podcast. What mood and atmosphere have you tried to convey through this mix?

Nothing in particular really, I just follow what I feel in the moment.

Can you tell us more about your track selection? Is it any similar to the material you use to play out?

I was just listening to some records that I’ve slept on until now, plus some recent stuff from friends and artists I like and I decided to record the session. There’s some old stuff in the mix, I love to dig deep in the past.

However I don’t have a different way to face a podcast, rather than a deejay ‘live’ set; I pick up a bunch of records, depending on the ‘mood’ of the day and surely on the context that I’m going to confront.

Do you have any new projects or collaborations that you’re currently working on?

Yeah. I’m working on some stuff for an Italian label, together with a Canadian friend you probably know, thanks to one of the coolest banging tracks of the 2015.

I’m also working on the launch of my own label. The first EP will be from a guy, that was surely one of the best surprises of 2015; there will also be a remix from one of my favourite producers too but I want to keep some discretion for the time being.

I remember you once told me that you wish your sound would gain more “physicality”. Is it an aspect you’re specifically working on through your new compositions?

Well, in a certain sense yes. I think that working with real instruments is not only ‘better’ in terms of sound, but it’s helpful if you want to gain a specific result.

I’ve learnt that if you want something, it’s better to create it yourself, instead of searching for samples or stuff that sounds similar to the result you want.

I’m not saying that working with software is a bad thing, actually I do that too, and sometimes it can be great for editing and arranging your work; but it’s very limiting if you want to create from ground zero.

What’s your setup like at the moment? Did you eventually invest in some gear?

I’ve got few pieces of gear but honestly I don’t have a real studio. I have to thank a friend of mine who let me work in his own studio, which is full of great machines and instruments. He’s a very talented percussionist and he’s helping me create some cool stuff.

I know you’re a vinyl lover and a voracious collector. What’s the last gem you dug up?

Yeah, I really love to buy records. But rather than telling you the last one I dug up, I would give you the titles of the most significant ones I received this year; they are the first editions of “Depth EP” and “Walt J Project EP”, both from the legend of Detroit Walter C Jones aka Walt J, who made me this enormous gift.

Looking back at 2015, what have been your highlights this year?

2015 was really positive for me. I had the chance to bring my passion around some of the best European clubs and meet some amazing people from all over the world.

I have to thank Jimmy and the Lobster Theremin crew for that, and also my big Ukranian friend Nazar and the guys that manage Unrelated Records, that all gave me the chance to press some of my tracks on their labels.

Which rising artists and producers are on your radar at the moment?

Hehe, there are so many amazing artists around. Surely if we look at the ‘danceable’ stuff I have to mention the guys from the Canadian riverside; It is full of talented guys over there such as Hashman Deejay, Lnrdcroy, Florist, Jack J etc.

But this year was full of surprises; I loved that EP on Going Good from Yoshinori Hayashi, which is probably my favourite release from 2015. Those Irish guys called Morgan Buckley and Olmo Devin are sick too; their ‘Shplittin’ The Shtones‘ EP on Rush Hour’s ‘No Label’ is stunning.

In Italy there are few amazing producers too, like Antonio Marini aka Healing Force Project, just to name one, whose sound reminds me the essence of Sun Ra.

How did you get into electronic music in the first place? Was it the kind of stuff you were listening as a teenager?

Funny question! I was a fanatic of rock music; I don’t come from a family of musicians, so my musical background comes from myself.

When I was younger I used to go into my parents’ car to listen to music on a decent sound system. My favourite group at the time was ‘Rage Against The Machines’. After a while I became bored to hear the same rock shit, so I decided to bump into a different direction.

I remember that I was hearing the word ‘house’ and consequently the expression ‘electronic music’, even if I had no idea of the meaning of that term.

On the other hand I started listening to some commercial electronic stuff, which was similar to the rock music I was listening to. I started loving works from Daft Punk and the Chemical Brothers. That’s how I approached electronic music. With time I became a fan of ‘house’ and ‘techno’ roots.

I wouldn’t say that I’m into a ‘precise genre’ I just love music in general and I think it’s hard to give a single face to what I used to listen, because I really love to approach everything.

What got you involved with music production?

The love for music and the wish to create something I like, from my own, giving an expression to my feelings.

Are there any artists you particularly look up to?

Probably the artist that astonished me the most during these last years is DJ Sotofett. Not only as a producer, but also for his skilled techniques as a DJ and promoter. Everyone knows him as producer, so I would not add any word about this point.

I think that Sex Tags (and everything related with it) is probably the most innovative record label in the world of the electronic music; surely there’s nothing similar around.

And the funniest thing is that there isn’t a big organized management team behind the label; he and his brother conduct everything; it’s a sort of ‘family business’, and the same is for his productions and the events where he takes part. I love this approach.

Aside from your musician’s activity, you’re also playing rugby at a semi-professional level. How do you manage combining both practices?

I’m studying as well, and sometimes it’s really hard to combine all these things together. To be honest music is just a big passion of mine, which I’m not spending so much time on. The time that I do spend on it is ‘quality’ time rather than ‘quantity’.

Rugby needs more dedication and that’s why I don’t have many gigs during the winter season. But studying will remain my main focus, because I don’t think that in the near future I could be able to live just with music and rugby.

I’ve got an upcoming release on Lobster Theremin, which should be out next month. I’m then working on some tracks for two big labels, but nothing is confirmed yet so I’d prefer not to keep the secret on that. Just keep your eyes peeled.

The biggest wish I have for the 2016 is to graduate. In regards to my music I just hope to get better in my productions and to release quality stuff, hopefully on my label, even if it’s not planned for putting out my own stuff at the moment. I hope to get few gigs outside the European domain too but I have to record more stuff in the meanwhile!