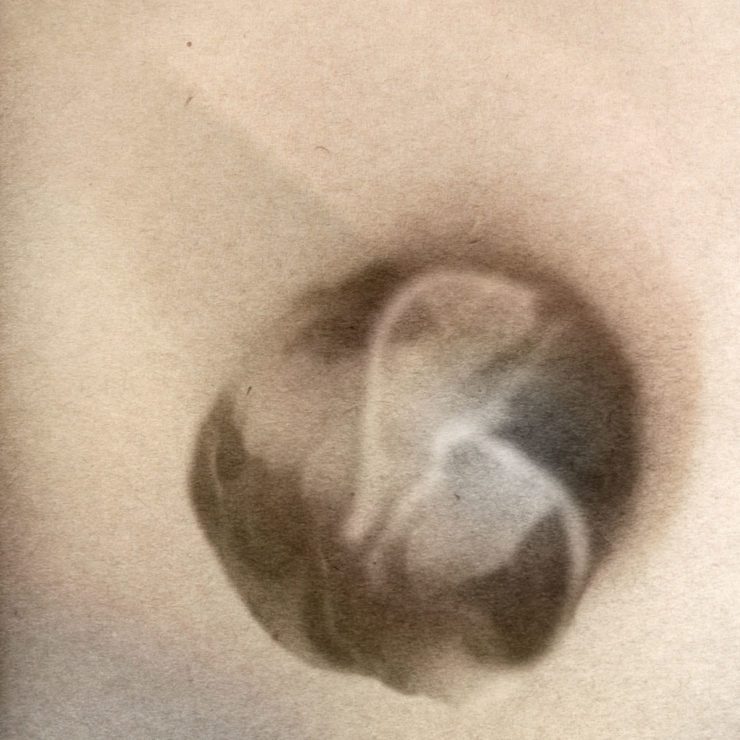 Civilistjävel! is one of those acts that travelled by word of mouth alone, delighting those who were in on the secret. So far the releases have been low key – a series of very limited numbered EPs associated with Brighton based Low Company. Most have arrived without fanfare, leading to a little internal “oh Christ, I’ve missed it” panic as you notice all the shops are showing an ominous ‘Sold Out’ as you push further and further into the dusty corners of e-commerce.

This feels like an emergent year for ‘Civilistjavel!’ First off, crossing into mainstream consciousness with the latest in the numbered series being a subtly lavish double EP affair and this, the official debut album and inaugural release on Perko‘s freshly minted record label FELT.

There is a distinct mood to Civilistjävel!. It is alien without being alienating, like floating up in the aurora borealis watching green tinted rainbows drift about you as the odd fleck of radiation sizzles the top of your ears. While the mood is shared between releases, the experience is unexpected – the first ‘Civilistjävel!’ was a collection of many meandering melodies right out of the Radiophonic Workshop playbook, the second stripped back to three glitchy, dubby techno laced workouts, with the third delving into hypnotic, rhythmic drone.

‘Järnnätter‘ leans on elements of each that came before, and – for fear of sounding like a long suffering Autechre fan – it is the most accessible release to date for those who might be reading the name for the very first time.

If you’re looking for a motif to hang on to, it is simplicity. Obviously simplicity is a very hard thing to get right and it is always accompanied by the threat of sounding frankly unfinished – there is nowhere to hide as you lay everything bare. The second track on the album – a full eleven and a half minutes – never feels like it outstays its welcome is testament to the accomplishment. You can hang on to the strands individually – the ever-so-slightly funky arpeggiated bassline, a mournful flute-ish sinewave and its accompanying wilting decay of keys, and percussion that is a simple lynchpin of tom drums. Each has its own agency, growing in intensity and knowing when to slip into the fog when necessary.

From here through the second half of the album, ‘Järnnätter‘ paints shades of grey. Like your mind straddling somewhere between awake and asleep as it makes an imagined soundtrack from a needle jumping on a run out groove and surrounding environmental acoustics drift in to create tonality. Drawing a close with emphatic punctuation, frosty synths and a snarling low end set up against a whipping, hissing mechanism. It is the polar opposite of the opener – a parallel that is dreamy and languid – as if it were two sides of the same beast, starting off benignly before revealing a predatory side.

‘Järnnätter’ LP is out now via FELT. Order a copy from Bandcamp.