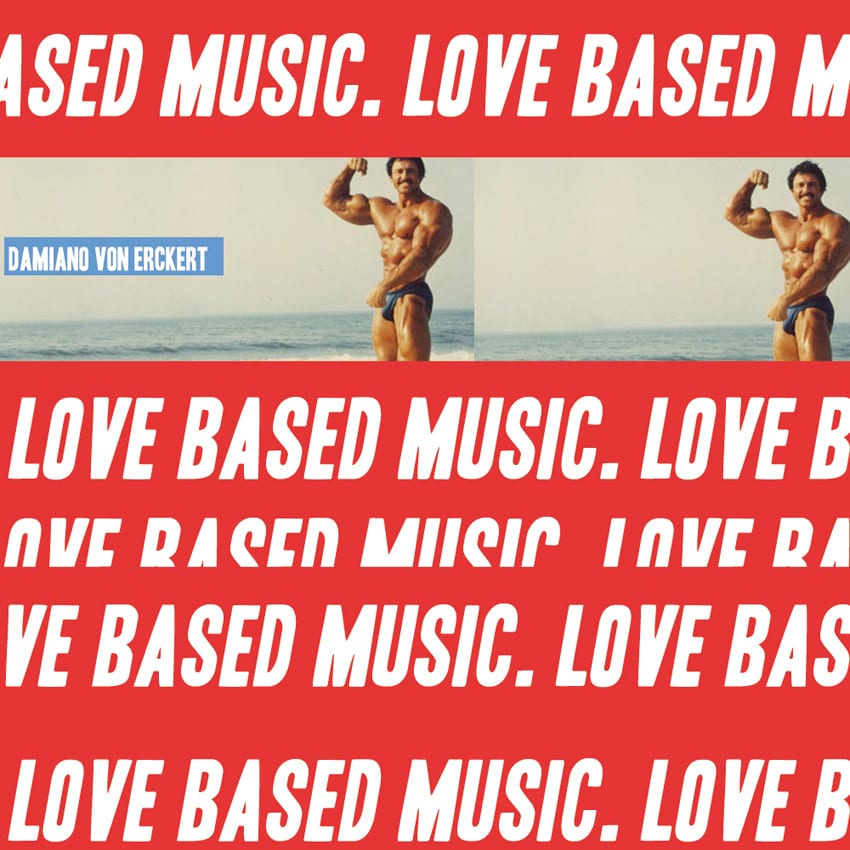 Does a piece of art have to be original to be good? The answer to this question will differ from person to person, but there certainly seems to be a push for innovation in the world of music journalism, sometimes coming at the cost of quality. If a new album pushes sonic boundaries but doesn’t quite work as a whole, it’s deemed an intriguing attempt by a producer who could go far. On the other hand, if a musician doesn’t break the mould but releases a brilliant collection of tracks, he runs the risk of ‘playing it safe’. It’s a thorny issue, particularly in our age, where a renewed love of hardware and analog sounds means that many contemporary releases don’t sound all that different from material being released twenty years ago.

The music of Damiano Von Erckert, who runs the stellar ava imprint in Cologne, notably flirts with nostalgia, particularly in the direction of a more soulful musical age, and therefore is a worthwhile consideration in the debate. On his debut solo album, Love Based Music, the producer could not justifiably be said to be making anything radically new, instead crafting a pitch-perfect selection of house tracks, shot through with funk and soul. Yet the songs that make up Love Based Music are not only throwback. They are not ‘only’ anything. These are rewarding, expertly executed dance tracks which show a producer with an enviable grasp over genre and mood, resulting in one of the year’s most enjoyable, coherent albums to date.

Despite its September release date, this is a summer album in its truest sense, mining the tropes of not only house, funk and soul but also disco and hip hop. These genres are not opportunistically appropriated – within each style von Erckert strikes upon an unrivalled authenticity, bringing the dustiness of live recordings and a striking musicality to the fore. Opener All Good serves as a beautiful opener to von Erckert’s musical landscape, a deep journey which brings emotive strings and harmonising choral samples to life over a weathered drum loop. Given the recent trend for this kind of filter-disco, it sounds strikingly modern (von Erckert has also pulled off this kind of trick before ), yet even when he goes for the nostalgic jugular he is successful: the lush funk of No Good Times sounds like a lost 70s number, all Latin percussion and sweet guitar licks. Meanwhile von Erckert’s most pointed attempt at disco results in his best song to date, the irresistible Hollywood, where the stunning vocals of Georgia Anne Muldrow make for a track which is upbeat in the purest sense, with none of the sickening connotations so often accompanied by the term.

There’s not an inch of fat on this record; whatever style Damiano goes for he achieves with style and substance. So the filtered glory of Housem, previously heard on a solo EP, still sounds as lush and propulsive as it did on first listen, while the warbling analog sounds of French Porsche strings detuned melodies into a heady, intoxicating trip. Later von Erckert reprises the hip hop stylings of this year’s superb Mr. Pink, What Have You Been Smoking? LP on the slick sketches Sweet and Kind and Reelluv, the latter a sultry burner which features the skilled touch of previous collaborator Tito Wun.

The record’s biggest surprise comes with 10-minute centrepiece Adhab Ya Msafiri, where textured percussion and Middle Eastern intonations are set against cool chords reminiscent of Nicolas Jaar. The track slowly takes off, building over the faint rustle of hi-hats to a loping groove, where smooth keys trade places with a taut synth riff, in an atmospheric journey you won’t want to end. The brilliant coup of Motor City Drum Ensemble as a remixer adds a real sense of danger to the original, based on detuned synth notes which penetrate a lush field of noir house sounds.

Each track on Love Based Music deserves to have its praises sung, coalescing into a superb whole where von Erckert nails every sound he approaches with unparalleled soul and dexterity. It may not push the house scene in brave new directions, but if there was ever a case for quality over innovation, this is it: Love Based Music is a house masterclass which will surely be listened to years from now, which is a great deal more than can be said for a great deal of the dance world’s experimental stillborns.

>> Read our interview with Damiano von Erckert and download his IA MIX.