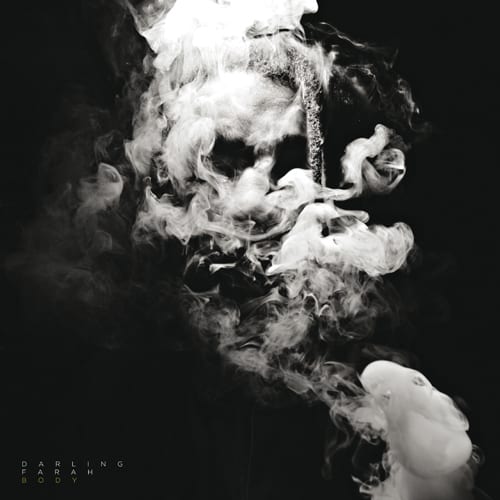 A blustering electronic wind blows out over skittering snares. Out of the darkness, a deep kick intrudes, followed by a sophisticated beat pattern that loops over that ominous mechanical wind. One minute in, and you’re already waist-deep in the dark, percussive world of Darling Farah. As the opener, North, continues, tensions mounts through those tough beats and a rattling sub-bass, each detailed layer given space to breathe, mount and be recognised by the listener. It’s a low-key beginning to a Techno album but could hardly be more effective in introducing all the elements of Body that will set it apart for fans of the genre; powerful atmospherics in a spacious, reduced soundfield.

When it comes to the most minimal forms of electronic music, a sense of space is of paramount importance yet it seems to be something that so many budding producers don’t realise – the silence between sounds is just as important as the sounds themselves, and when something makes a sound, that sound has to count. Born in Detroit, 20 year old Darling Farah’s interest in Techno shouldn’t be surprising. What is surprising is how he fostered this interest and talent despite a move to the United Arab Emirates, a country where dancing is illegal outside of the home or a licensed club. Now based in London, and with a handful of confident EPs on Civil Music behind him, Darling Farah now brings us Body, his debut album that was entirely produced in just three months.

After the quiet atmospherics of the opening track, second cut Realised brings out the big sounds. And what sounds they are- there is a certain breed of producers, among whom I’d rank (off the top of my head) the likes of Actress, Floating Points, Andy Stott or BNJMN who have such distinct, vibrant sounds at their disposal that they immediately leap out at you compared to the generic Ableton lego-blocks used by the majority of artists. Farah easily joins this group, his sounds decayed and twisted to the point where each layer and effect has a life of its own, particularly at high volumes, as the sounds feel uncommonly rich and attract the listener to the details and structure. On Realised, a huge bouncing rhythm is driven forth by hissing pistons and whirring atmospherics, alongside some terrifying sub-bass towards the close- and that’s it. This is dance music at its most reduced and tempered. When each track is structured so carefully and the sounds are so perfectly complimentary the effect of only a few layers is staggering, proving to all maximalist producers how much can be done with so little.

Across Body Farah takes these basic tools, along with blistering synth winds, and applies them to a range of unique percussive constructions, from the minimal 4 X 4 of Fortune, cloaked in reverb and warm analogue hiss to the canned loops of All Eyes which heavily references Dub Techno with its echoing synth strokes. All the tracks here are dark but there’s a great degree of range across the album, and the tracks tend to err on the shorter side, keeping Body listenable and making you pay attention to the details across repeated spins. When you start to become familiar with the tracks certain sounds leap out at the listener, particularly subtle human touches such as the background chatter deep in the mix of Fortune or the looped half-sigh that haunts the decaying synth melodies and slow building percussion of stunning title track Body.

Each track here is so finely wrought as to continually demand the listener’s attention. Curse casts chugging Techno into slow-motion, with a ghostly ambience and subtle synth sweeps accompanying the relentless kick which settles into the LP’s brightest moment, the beatless arpeggiated expanse of Aaangel, a brief respite which shines bravely yet coldly against the percussive onslaught surrounding it. The smattering of details I’ve highlighted are only some of the joys to be found in a dedicated listen to Body, and any Techno fan will want to listen again and again to catch the stuttering synths of Fortune Part II or the hollow beat at the end of closer Telling Me Everything which sounds like someone ominously dribbling a basketball.

The album’s darkest moment comes in the form of Bruised, a late track that hits like nothing else. Haunted synths underpin spare kick stabs before everything halts at the entrance of a devastating bass growl, a voice intoning darkly ‘this is it’ before the growl and vocals are pitched down to somehow become even more threatening, echoing out into the vast abyss this music always teeters next to. The beat patterns are expertly sequenced and Farah nails the sense of mood, but the same could be said of every one of these eleven tracks. This is an album of deeply atmospheric and spacious Techno music you’ll want to keep returning to. Just when you thought Actress rewrote the rulebook with RIP, there’s a new contender in town- Darling Farah’s debut is stylish, brave and thrilling.