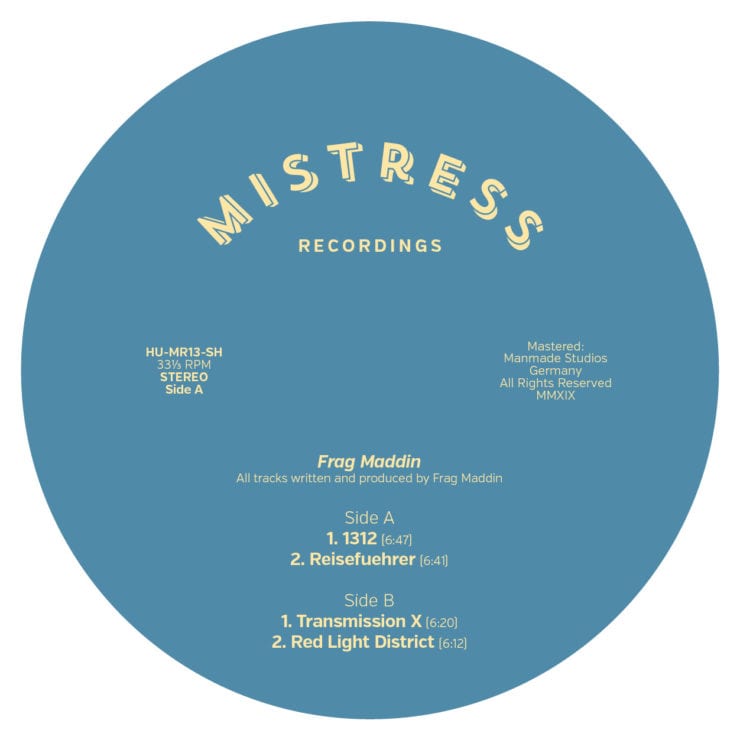 There is a reassuring sensation of control over the manner in which Mistress Recordings operates, with a presence that is of a behemoth set to operate over millennia. Their releases act as a pulse and it throbs each year with unerring regularity. You are aware of the troughs, which then create anticipation that next gravitational thump is just around the corner. Mistress 13 has arrived at peak thump.

2019 kicked off with a terse and bleep laden release from Kirill Mamin, before breaking form with their under-the-radar talent discovery manifesto through a big hitting double twelve from electro legend Anthony Rother with label boss DVS1 on remix duties. The next release sees Frag Maddin – aka producer Burhan Temizbas – hit the label with a return to the continued mission to blood new talent.

Mistress 13 is a delightfully sprightly session on a label that has often been dusty and understated in tone. ‘1312‘ is a bouncy house number with broken kicks and frayed hi-hats, layering in a flute line that is not a million miles away from Kings Of Tomorrow’s classic ‘Fade 2 Black‘. Things deepen from here in, yet never dispensing with a club focus. ‘Reisefuehrer‘ lets ribbons of deep house chords float over a heavy percussive groove, both ‘Transmission X‘ and ‘Red Light District‘ feel like classic house dubs ripped from the nineties and run through a liberal dose of saturation.

In true Mistress tradition, the digital bonus proves to be a bit of a secret weapon, verging on classic Detroit techno ‘Gotta Run‘ takes the soul of house, steeling the backbone with a clap-along kick and arcing string melody. All in all, another future secret weapon has been committed to the Mistress vault. Long may it continue.

‘Mistress 13’ is out now in vinyl and digital formats. Order a copy from Bandcamp.