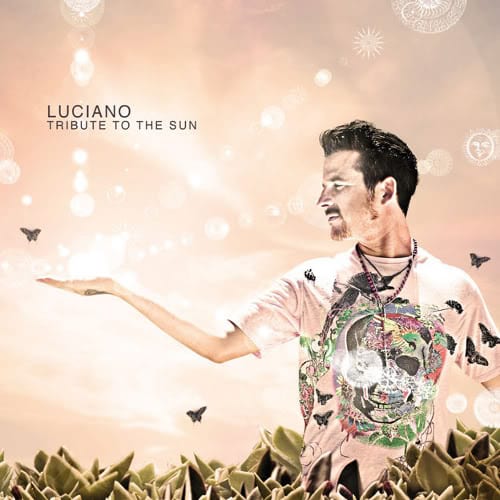 The Swiss-Chilean Cadenza supremo has been flirting with various shades of house and techno across a catalogue of releases since 2000, and 3 years later, he had already been inducted into the upper echelons of techno’s hierarchy in that most immutable of ways – a release on Perlon. Since then he has been carving something of a niche for himself and his army of fans, each enraptured by a rare consistency, attention to detail and a warm, thoroughly musical sensibility.

Although continuing to release club-facing productions on various keynote labels, synergistic collaborations with the likes of his compatriot Ricardo Villalobos and his live album for Thomas Brinkmann’s max.Ernst label have long proven that Luciano’s artistic core cannot be reduced to one ethos or listening environment. And so it holds with his forthcoming album “Tribute To The Sun”, the logical successor to 2004’s “Blind Behaviour LP”, itself one of the defining LPs from the late-microhouse era.

The first point is one of technicality; rarely have we reviewed a studio album that clocks in at less than 30 seconds below the absolute maximum capacity for a CD. Comprising only 10 tracks and given that one track is a vignette, most tracks clock in between 8 to 12 minutes in length. It’s fair to say you’re getting bang for your buck here, at least in terms of raw volume.

The second point is one of aesthetics. The cover depicts Luciano holding his palm out for what could well be the fairy inhabitant of a mystical, sun-drenched utopia. Now, in contrast to many of his more typical reclusive contemporaries, Luciano has never shunned the limelight nor the chance to broaden his demographic; one wonders whether this image is simply a symptom of that; because it is, in profound requirement for a much better word, rather poptastic. One can only hope this won’t deter prospective customers from the faceless electronica-buying peloton.

Looking back towards the “Blind Behaviour LP” as a reference point, the most striking progression in 5 years of Luciano as an studio album artist is one of exoticism. Whereas that record explored more the more traditional tributaries of his oeuvre – most notably dub, manipulated 90s glitch-tronica – this is Luciano in full globe-trotting mode. Senegal’s Ali Boulo Santo (who is the nephew of legendary “King of the Kora” Soundioulou Cissoko) contributes his remarkable dexterity to “Africa Sweat,” Iranian percussionist Omri Hason (who is also part of Luciano’s AEther live outfit) teams up with Swiss hang drum inventor Bruno Bieri for “Hang for Bruno”, while the superb vocal talents of Martina Topley-Bird are utilised on the beatless ode to nature’s rhythms “Sun, Day and Night”.

Opening track “Los Ninos de Fuera” starts on a rather wanton dissonant note, or rather, a number of painfully time-stretched, caterwauling vocal ones. Hard to bear, but they soon give way to joyous, powerfully insistent African chanting and soon, a solid kick drum, a trademark Luciano walking bassline and the obligatory hand percussion enlivening the heady brew. Tribal vocals on the opening track: clearly a very effective way of announcing the album’s ethnic leanings.

Track 2 “Celestial” is an album highlight. Making a couple of small samples from the singer-songwriter Keren Ann‘s song “Liberty” go very far indeed, Luciano weaves each fragment through background ambience, kick drum and sublimely organic sub bass forming the only consistent surface, building very gradually towards the most ethereal, ecclesiastical choral sample from said haul. Clocking in at 12.31, one wonders whether self-satisfaction took it’s toll, but Luciano’s contemporaries should still take note: it’s a masterclass in how the minimal aestethic can be applied. In arrangement, rather than timbral variety.

From there, “Sun, Day and Night” jettisons the kick drum (sacrilege for a techno artist, of course) to allow Topley-Bird’s delicious voice to soar over an emotive chord structure, woodblocks, disembodied snare drums and undulating crashes. It works from a melodic and harmonic perspective, even if structurally it feels somewhat unsatisfying. Of a very similar ilk, the alluring “Conspirer” deploys a delicate mallet instrument loop with a pared down rhythm. This time clocking in at 6.59, it again demonstrates Luciano’s knack for making a small amount of content go just that bit further.

“Hang For Bruno” seems to be the moment when the record finds it’s own voice. 9 minutes long, all unrestrained swathes of uplifting hang drum, theremin-type textures and an busy, unconventional beat structure incorporating a playful kick pattern and delightfully incongruous 8-bit FX in lieu of snare/clap. All in all, it’s a wonderful assemblage of the modern and traditional, the organic and the functional, and is precisely the moment when you get what Luciano is trying to achieve with this album.

“Fran Left Home” is, to be blunt, an album filler and adds some fuel to the concern-fire, concerns from elsewhere in the album over how far, and for how long, each idea or motif can be stretched. It’s essentially a very long vignette, consisting of a elastic bassline, synth pad arpeggio and a beat sans kick drum; and then, 5 minutes and 20 seconds later, the loop fades out. Yes, it just fades out. (Infact, as a point of no interest, many of the tracks on this album do.)

In hugely marked contrast, “Africa Sweat” is arguably the album’s centrepiece. A full complement of frenetic, clapping rhythm, Ali Boulo Santo’s whirlwind Kora and some startlingly visceral and irresistible call-and-response tribal singing serve up a hugely enjoyable ride that again allows us to grasp more lucidly what Luciano had envisioned for this album. The following “Pierre For Anni” is a true vignette in the tradition of “leave microphone on and lying around”, and doesn’t really enlighten nor intrude too much on the passage of play.

Penultimate track “Metodisma” will be like manna from heaven to anyone who bought this album on spec based on their knowledge of his club-facing material or nearly anything on Cadenza. Darkly bubbling low end percussion and growling effects are neatly eviscerated by a dependable kick drum and skittering offbeat hats, before Luciano unleashes the perfect shock treatment for the braying optimism of the rest of the record: an unkind selection of agonising screams and guttural, tripping unintelligibles ala Boards of Canada. Although it’s hardly the way to repay your listening public, it’s certainly evocative if nothing else, even if again the overall volume of ideas doesn’t justify the length of the track. Album closer “Oenologue” continues in a similarly sinister 4/4 vein, offering a filtered 303 looped bassline, John Carpenter-esque synth sweeps, clever hi-hat programming and some pitch maniacal cackling to boot. After an album of such positivity and humanistic joy, and one with this front cover, it’s strange to say the least that both these tracks should be selected to close out the album.

I certainly enjoyed “Tribute To The Sun”, but not without reservation. Summarising up the experience as a whole is tricky. While the undoubted scope of the record in terms of assimilating disparate geo-ethnic influences is impressive and yields some moments that could easily stand on their own merit as electro-acoustic recordings, these have precious little to do with Luciano’s stock in trade; and of this, the more overtly dance-themed cuts are not strong enough nor filled with enough ideas to stand on their own in a similar way. Additionally, there are some fairly non-descript moments throughout; a track or two registered a little faintly on this listener’s consciousness, at least the first time around.

It’s not for me to question how an artist chooses to program an album, but a sense of consistency and coherence is one of my primary concerns. Probably because the swashbuckling, genre-transcending collaborations don’t comprise the entire album, it ends up feeling divided between Luciano’s own solo visions and those that would fit more snugly alongside his vigorous live projects. The final two tracks highlight this best of all; both stand out like a sore thumb within the programme. Devoid of ethnic influences, claustrophobic and laden with psychopathic samples, they just feel like Luciano, more or less alone, in a studio.

Although one could go on to question the size of a demographic responding equally to dark techno punctured by emetic scream samples and indigenous African instrumentalism, I wholeheartedly recommend that you do invest your own time into “Tribute To The Sun”; after all, you could easily be one of their number.