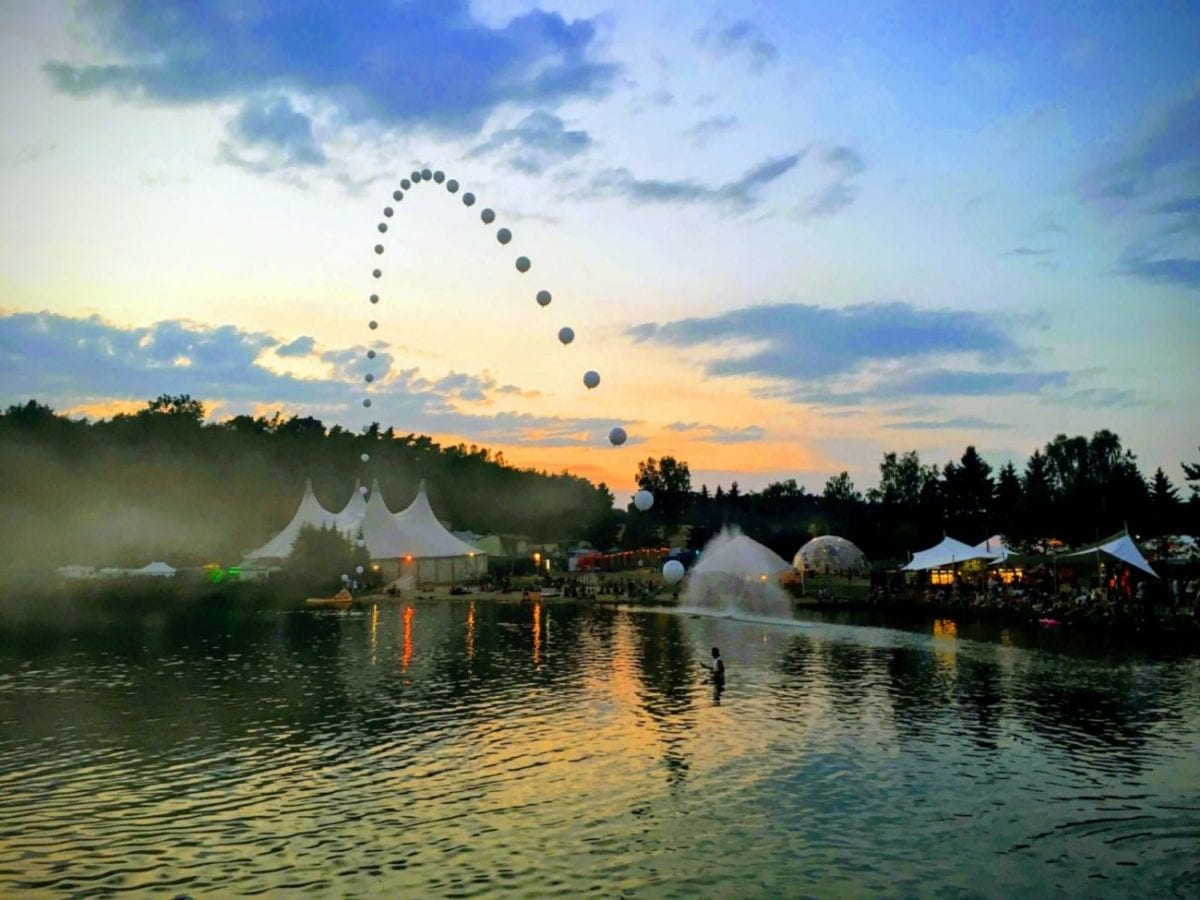 In its 21st year, Nachtdigital has no plans to grow up. With playfulness at its root, the festival creates an environment in which performers and partygoers can let loose.

Although the festival is condensed in both time and space (48 hours of music across 4 stages) there is no sense of urgency. In fact, there’s a certain slowness about the festival, perhaps steered by the unannounced set times and alluring laziness of the lake. Given that temperatures were in the mid-thirties for most of the weekend – this was a welcome pace for perspiring punters.

Upon arrival on Friday afternoon, festival goers waited patiently in line to collect their wrist bands and welcome pack. Once through, you walked past the mushroom flaked gates, down a red carpeted pathway, through a mouth designed archway and into the belly of Olganitz.

Freshly made lemonade was being served at a bar, where you could also buy up a copy of the Various Artist LP that had been made for 21st edition of the festival. Electro pop duo Oxo Oho welcomed festival goers with their feel-good beats and mischievous electro-flattering, vocals, trumpet, loops and synthesizers. 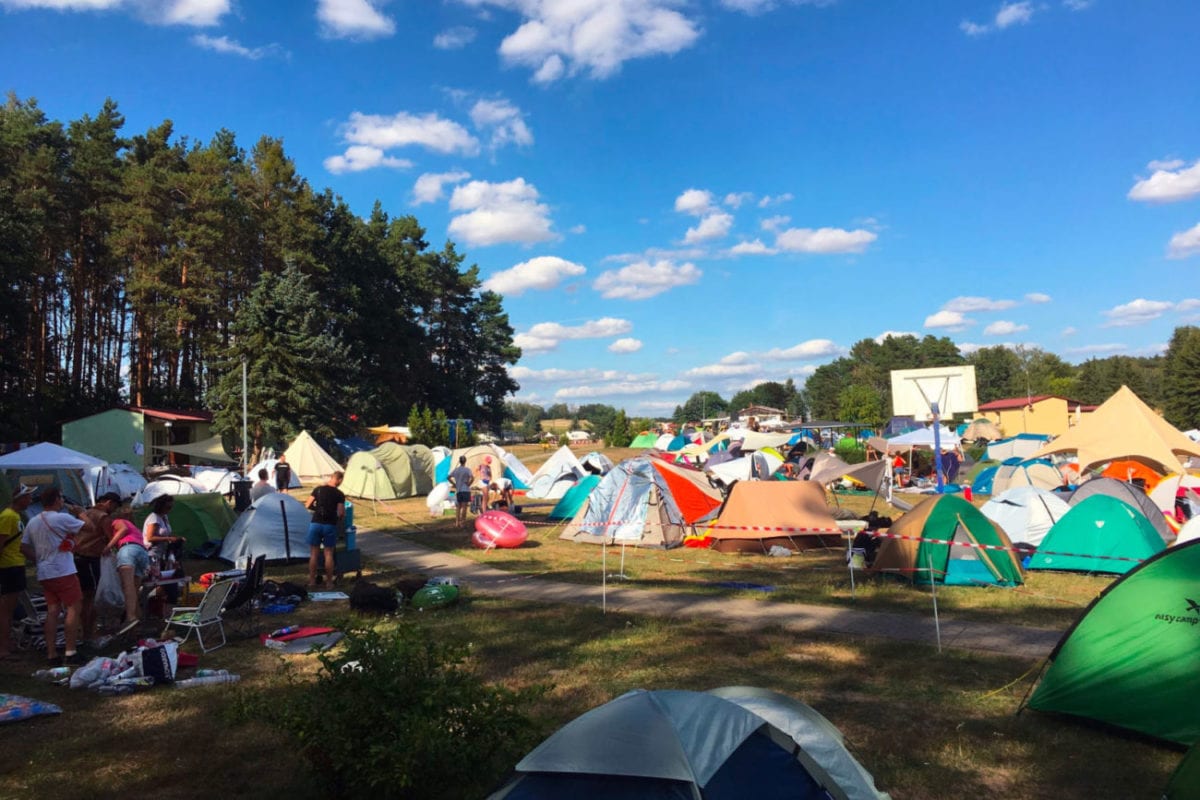 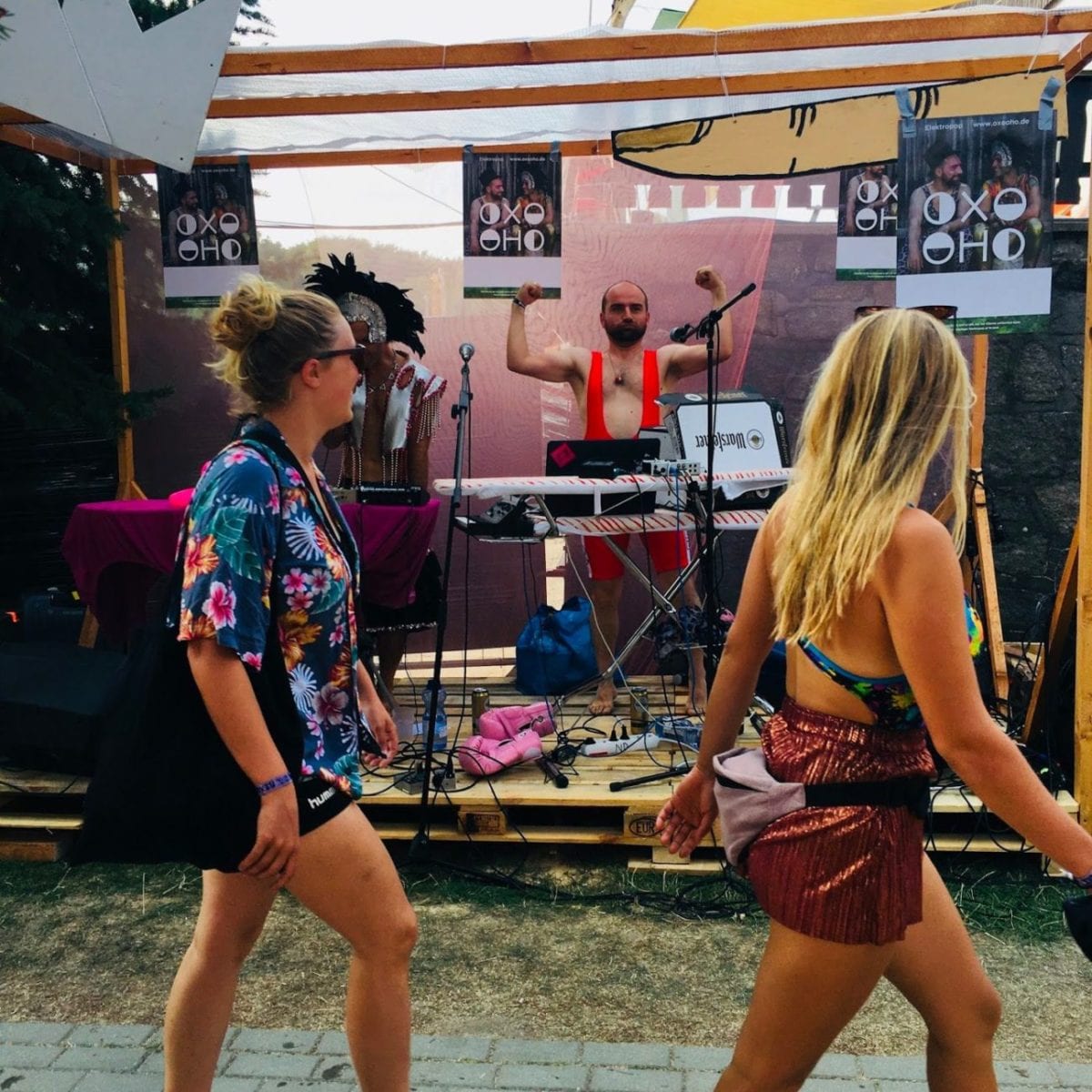 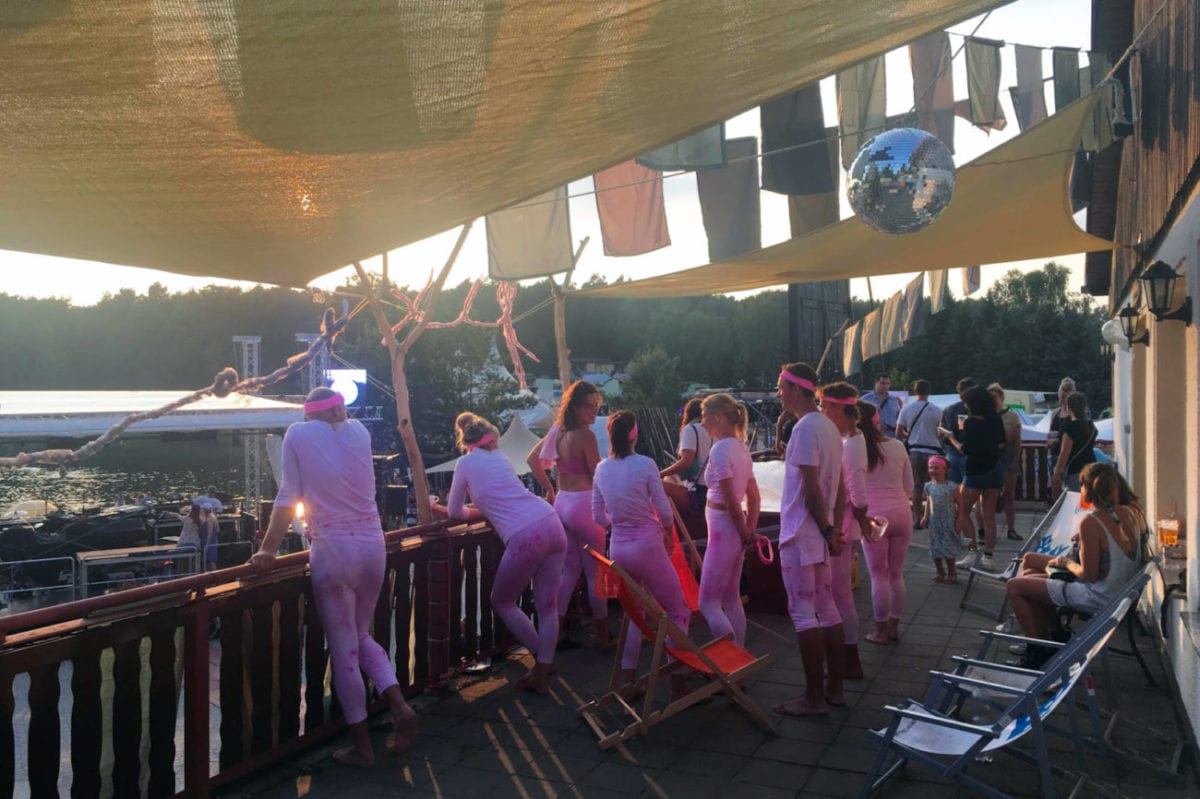 We walked alongside the lake and steered ourselves to the far end of the campsite, adjacent to the tree-line, to find shade and establish camp. Fellow campers were eager to setup their make shift homes for the weekend. The immediate vibe was very welcoming, everyone helped each other out with erecting tents and blowing up mattresses. With our camp successfully setup we ventured back to the festival to explore the site before the music commenced.

As the sun began to descend, attendees arrived at the gates to the main arena. An assembly adorned with pink velour outfits amassed on the opposite side – music started to pump out of the Open Air Stage and smoke billowed from the speaker stacks. What had appeared at first to be a random dance off, was in fact the beginning of the opening ceremony, a tradition at Nachtdigital.

As the volume increased, the choreographed procession continued to the beach at the Open Air Stage. Looking out across the lake, giant smoke rings began to appear from a pair of watchful eyes and a smaller dance outfit could be seen throwing shapes on a pontoon.

Anticipation levels were at an all time high and the gates were finally opened, letting people into the festival. Wolf Muller & Niklas Wandt stepped up to the main stage to deliver the first enthralling live set of the weekend. Next up was a beautifully deep and atmospheric live set from Portable, bravely donning electric blue hair and an all-white outfit. Don’t DJ then took control of the Open Air Stage, bringing the vibe down, whilst also injecting some heavyweight bass that gave respite to eager dancers.

At midnight on Friday, VTSS banished all daytime lethargy as atmospheric smoke drifted across the lake. Building from a childlike bounce, she crafted a steady ascent infused with raw energy. Bjarki then took the reigns with an unapologetic trance set. It was silly yet exciting and those that could jump straight in were rewarded – however some of the sound system and the crowd were not ready to go bang. 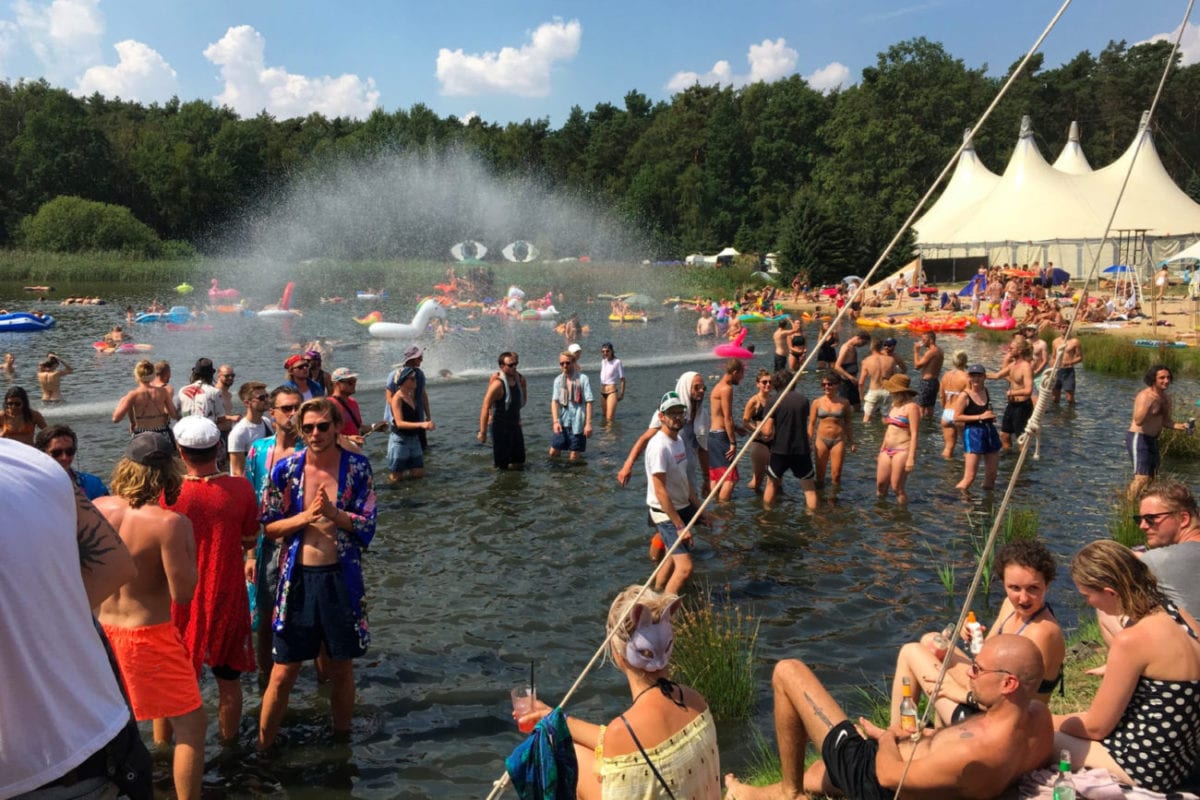 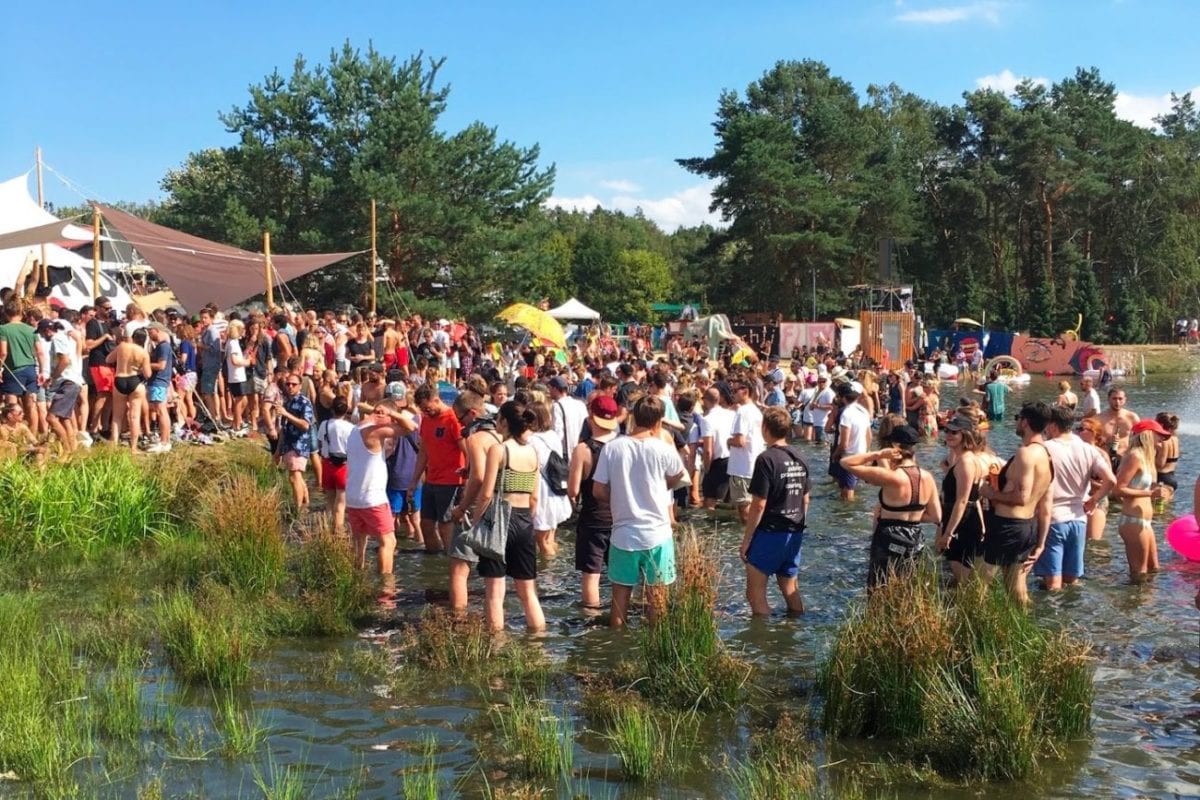 Over at the Ambient Stage, people lay on mattresses zoning out as Nina and Ben UFO played some cherished chill out records, including Global Communications’s ‘14:31‘ and Aphex Twin’s ‘Stone In Focus‘. Back at the Open Air Stage, Demdike Stare played an array of Detroit techno and moody electronics. Later that night/early morning, London’s Make Me held down the Open Air Stage as they journeyed through genres, with ‘The Age of Love’ sound-tracking the sunrise.

Down at the Lake Stafe, Milan-based DJ and Terraforma resident Paquita Gordon played one of the best sets of the weekend. Dancers were treated to the deep sounds of Maurizio’s ‘M6‘ and elevated to chugging house records. Giegling founder DJ Dustin followed on from Paquita, playing a more downtempo affair sprinkled with Aphex Twin’s ‘Iz Us‘.

Whilst the music played out Saturday saw throngs take to the lake as temperatures soared – pizza inflatables and unicorns were the vehicles of choice. Elsewhere in the festival, other modes of transport were being explored. As I innocently made my way to the ambient stage, a heavy dose of gabber led me to the Techno Safari – a travelling zoo of ravers clad in animal skins and armed with water guns. After making a few rounds of the festival entrance, the parade made its way to the local town of Olganitz where Job Jobse played and Darude’s all-time banger ‘Sandstorm‘ was dropped.

By 7pm, the weight of the encroaching clouds bore down on the site. Burnt Friedman paced his way to the centre of the sand where sluggish spectators surrounded him. In his prototypical style, he performed immersing himself in the crowd rather than behind the sound system. His elegant manipulation of subtle sounds grounded on a hypnotic rhythm made for a mesmerising daydream. rRoxymore’s luminous live set followed and awoke the resting with a twinkling of tranquillising tones seasoned with exotic elements. 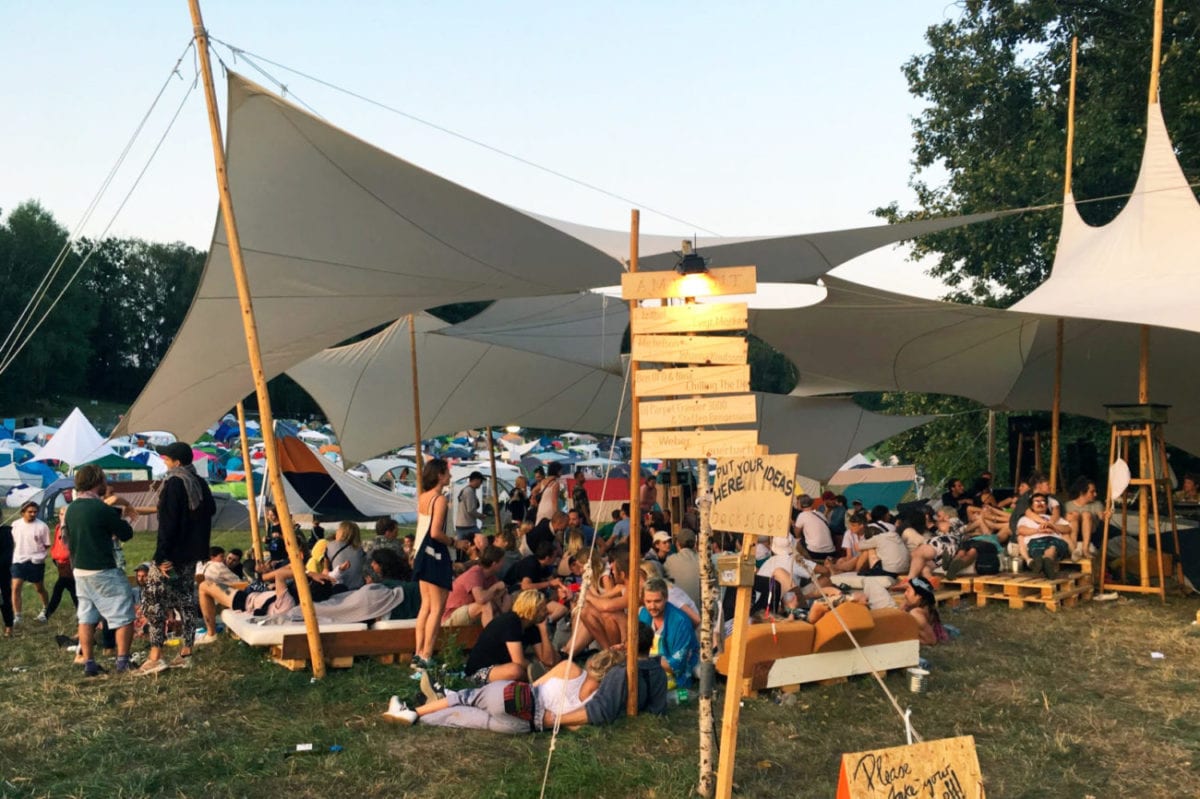 Blawan came thundering down at 11pm with constrained force, momentarily peaking whilst maintaining a powerful yet fresh pace. A few hours later, Objekt knocked people’s socks off with a fast delivery of rhythmic rave energy. Laden with sudden twists and turns, he kept it electrifying and dynamic throughout – with a curve ball close of 30 minutes of jungle.

As a stark contrast, Make Me offered repose to those on a different level – this time on the Ambient Stage. Joined with Ntalia from Universe of Tang, they bathed the bedtime crew in soothing sounds until the early hours of the morning.

Back on the Open Air Stage, Courtesy welcomed the morning with light and airy techno, providing a much-needed massage to mind and body. The set ended in an apocalyptic manner dancing to Kaycee’s ‘Love Stimulation‘ in the pouring rain. However that wasn’t the only scene in Olganitz on Sunday morning.

The surprise guest turned out to be Richie Hawtin who landed on stage with boxes of his own-brand drink ‘Enter.Saki’ and an 8 person strong entourage all dressed in black. Was it ironic? Was he taken seriously? That remains a mystery. What is known however is that his appearance provided excitement and giggles until midday, keeping in line with the rest of the festival: refreshing fun. We cannot wait to return to Olganitz next year! 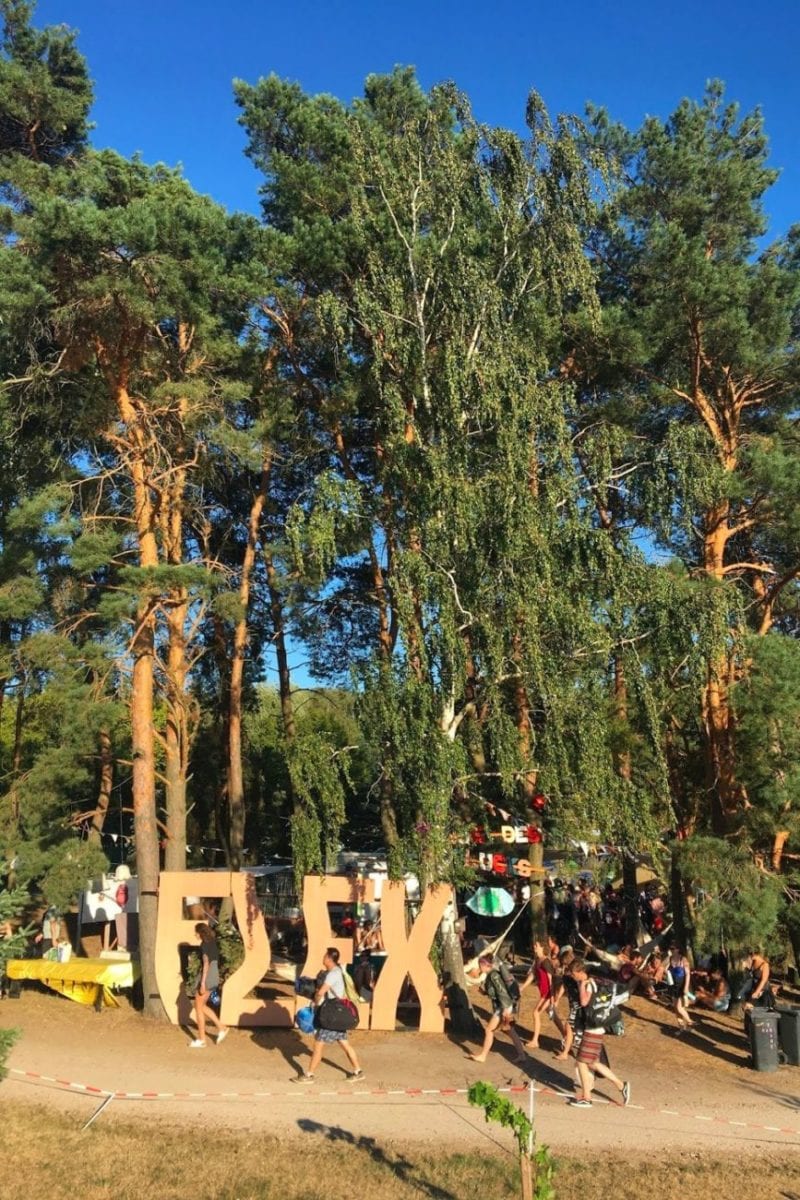