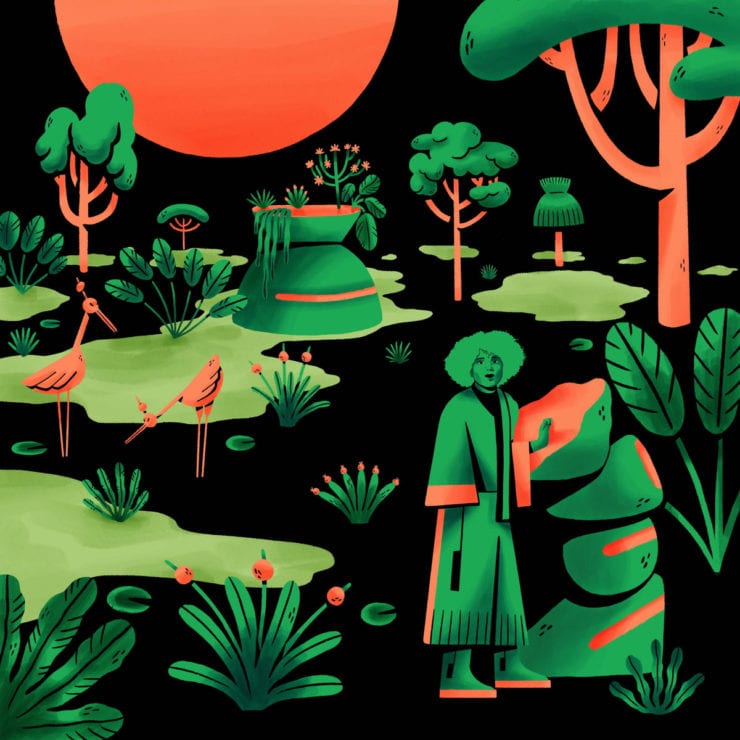 rRoxymore lands back on Don’t Be Afraid with her debut album ‘Face to Phase‘, marking not only the graduation from 12” singles to the coveted Long Player format, but a more considered and effective approach to the artist’s production.

Not to suggest any form of earlier immaturity within earlier material – The Room 4 Resistance affiliate has long been throwing curveballs down the ear canals of discerning ravers and selectors akin. Finding home amongst prior discography, ‘Face to Phase‘ marks a rare foray into album territory for the label – but, as evidenced with Karen Gwyer, when DBA strike the album gong, it doesn’t ring out of key.

rRoxymore’s work is barely mundane for a single kick; previous work in club-facing leftfield techno is both a refreshing drink and a sharp left hook rolled into one sublime musical package. Face to Phase‘ takes things above already established thresholds, and into what I’ll somewhat superficially term here “album material”.

The boundaries of this are soft-edged with subjectivity, but the term is introduced merely to divide this record from the kinds of albums that offer nothing truly new from an artist; this is not a merging of dance tracks packaged into a longer record merely for vanity’s sake, but a tapestry of musical styles unusual even by rRoxymore’s standards.

Taking inspiration from several disparate styles of music, the record is rife with the kinds of thick, foggy bass commonly found in early dubstep, and at times certain elements bear reminiscence to grime, and even UK Funky – but with a markedly more creative flair.

Across the runtime we’re given the full treatment: ‘Passages’ is a neck-twisting bouncer, reminiscent of post-FWD material with leering synth lines and thick bass; ‘Forward Flamingo’ initially struts along with a flair for funk, but breaks into a bridge that shows off skilled development of structure and anticipation; ‘Energy Points’ layers up percussion in dizzying combination, with dramatic ambience providing the backdrop.

Perhaps the key reason this album strikes one as something new, both creatively for the artist, but also at a more general level, is the depth to which the ‘world-building’ vein of music has been tapped. The foghorn bars of the opening track herald your arrival to the Isles of rRoxymore, and as a listener you’re given something of a tour of the bizarre and eclectic ecosystems that have been created for you. At times it’s as lush as thick green grass, yet elsewhere you find yourself tiptoeing over staccato drum stones.

If you’re looking for a getaway, from either drab, formulaic 4/4, or just the world in general, ‘Face to Phase‘ offers harbour. Regardless, it packs versatility and personality into one luminous green-flecked sleeve, and it’s a showcase of originality from an artist whose name is already taped next to that label.

‘Face to Phase’ is scheduled for release 27 September 2019 via Don’t Be Afraid in vinyl and digital formats. Order a copy from Bandcamp.

Discover more about rRoxymore and Don’t Be Afraid on Inverted Audio.