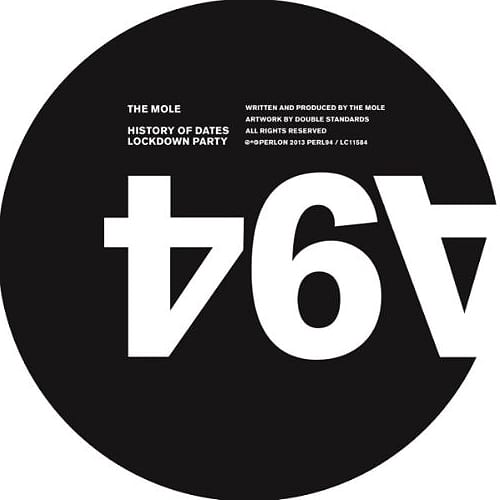 The ultra-minimal vogue of Perlon’s early days may faded, but the label is far from dead. Now Canadian producer Colin de la Plante, aka The Mole, can join the likes of San Proper and Ricardo Villalobos charting the label’s finest output over the last half-decade. Known just as much for his impressive mixing abilities as for his dance releases, The Mole has moved between Canada and Berlin over the last few years, keeping a relatively low profile befitting his tastefully subtle output. For A History of Dates he has come up trumps, issuing a pair of sophisticated house cuts backed by a scene-stealing remix courtesy of American DJ Sprinkles.

The title track perfectly exhibits The Mole’s production prowess, as he conjures a relaxed arrangement of filtered vocal snatches and atmospherics over textured percussion and a deep, wandering bassline. Despite the degree of finesse to the composition, listeners will not be left wanting for a groove, as a sturdy 4/4 underpins the shifting array of synth blips and ambient details. On the flipside Lockdown Party is a more upbeat number, where a collage of samples from children’s chants to wolf cries are shot through a field of bristling percussion and rippling synth melodies.

Both tracks are sure to hit home for fans of house’s hypnagogic extremities, rich as they are in both repetition and detail, yet The Mole offers little structural progression to speak of – it’s more loft party than warehouse rave. Perlon’s surprising coup in its choice of remixers destroys any such boundaries, as DJ Sprinkles offers a remix of Lockdown Party that, for better or worse, utterly outshines the two original offerings. Terre Thaemlitz, known just as much for his ambient and written work as for his great house releases as DJ Sprinkles, more than doubles the track length in his aptly titled ‘Crossfaderama’.

Taking the vocal chant as a melodic core, Sprinkles turns out a jam-style epic, leaning heavily on the crossfader and incorporating a few surprise samples in the process (does anyone else hear the opening bar of house classic Can You Feel It?) The remix also suffuses the original with a real sense of momentum, ebbing and lulling right up until the cosmic synth wash of its finale. As a whole History of Dates ranks among Perlon’s finest recent releases; The Mole’s refined house cuts will surely be a draw for some, and DJ Sprinkles’ phenomenal remix makes for a particularly enticing package.