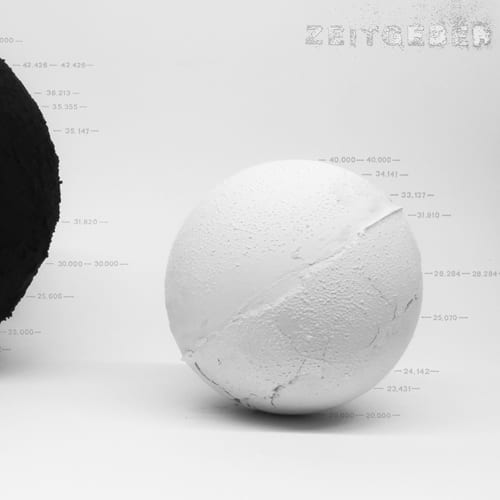 Zeitgeber is the new collaboration between two of the leading lights of the most abstract and adventurous side of modern electronic music, Stroboscopic Artefacts boss Lucy, and Electric Deluxe’s Speedy J. The two have combined to create a self titled debut album that is equal parts minimalist techno and impressionist sound installation, fusing mechanical pulse for darkened warehouses with eerie sound collages for headphone isolation.

Despite no explicit depiction of a concept or theme, the tracks conjure images of darkened industrial districts and groaning factories. ‘Closely Related’ opens the album with cement slabs of bass. Stuttering oscillations drive it forward with a workshop like rhythm; cold, mechanical and oppressively repetitive. This is a framework that is expanded on and developed throughout the album, and despite initially being quite abrasive, becomes addictively hypnotic.

Similar to Emptyset or The Haxan Cloak, Zeitgeber’s music is largely built on a deconstruction of sounds normally found on the dance floor. In this case, the materials and forms of techno are pulled apart and reformed through viscous equalisation and drones into a product that blurs the borders between techno, power electronics and industrial. ‘Skin’ sounds like an Actress track zoomed in and slowed down. The pulse remains but the gaps between glitched beats have been stretched out to sound like the gasps of a dying machine. The static drenched whine under the track slowly revealing itself as a slow moving melody line. ‘Now Imagine’ has a sparse drum machine that could be lifted from an Underground Resistance song. Over the ten or so minutes of the track the beat keeps briefly halting. The stops never signify any drop or change though rather a stutter before the track regains its ominous momentum. Reverb drenched textures float over the top, creating a gradual sense of movement over the mechanised loops.

Zeitgeber’s music isn’t all dystopian bleakness though. ‘Before They Wake’ evokes a city before the tumult of daybreak. It’s soft, almost tribal beat, twinkling keys and samples of radio chatter create a warm soundscape that provides a brief relief from the mechanical intensity of elsewhere, avoiding falling into New Age clichés by maintaining the sense of urbanised isolation found throughout.  ‘None Of Their Defects’ features warm wobbly synths over static covered beats. Again it is a contrast that fits in with the feel of the album, another viewpoint on the same theme. These cracks of light provide a unique diversity – As mentioned at the start there is something quite impressionistic about the whole piece, with ideas and concepts being explored from varying perspectives.

The monotonous pulses and harsh frequencies of Zeitgeber’s debut mean it is by no means an easy listen. However as the album unfolds it becomes increasingly absorbing. Electronic music is often associated with reclaimed industrial spaces (warehouses etc). Zeitgeber seem to absorb and transmit from the bleak environments that surround them, the ones that haven’t absorbed the neon lights.