French musician and score composer Para One (real name Jean-Baptiste de Laubier) has trod a somewhat unusual path throughout his musical career. After crashing the scene with his ‘Epiphanie‘ album in 2006, de Laubier turned in several more solo studio projects all whilst changing tack, steering his ship towards the creation of film scores and sound tracks.

In the world of OST’s de Laubier found sturdy footing, working with lauded filmmaker Céline Sciamma on her much-celebrated films such as ‘Tomboy‘ (2011), ‘Girlhood‘ (2014) and ‘Portrait of a Lady on Fire‘ (2019). It is closer to the world of scores and of composition where his latest album, ‘SPECTRE: Machines of Loving Grace’, sits, far more than the world of 2014’s ‘Club‘, a hedonistic affair.

Instead, de Laubier turns his sights to more exploratory realms, fed from his passion for legendary anime soundtracks — such as the inimitable ‘Ghost in The Shell‘ soundtrack by Kenji Kawai — but also towards the personal experience of travelling, and creating and recording music with others along the way.

The result is an album so far removed from his prior work that it could easily be misconstrued as something made by an entirely different individual. ‘Club”s glucose- and taurine-fuelled energy has fully departed, in its place standing a cognisant and internationally-informed sound, certainly developed from his travels through Japan and his lessons in the Jegog instrument in Bali by a local master, but also derived from a stern attention to musical discipline and technique on more familiar electronic counterparts.

Released digitally through Animal63, with a vinyl edition through the now-legendary We Release Whatever The Fuck We Want (WRWTFWW) label, the reissue label home to de Laubier’s beloved Midori Takada, Satoshi Ashikawa and Kenji Kawai, ‘SPECTRE: Machines of Loving Grace‘ is accompanied by three EP’s of lead tracks ‘Shin Sekai‘, ‘Alpes‘ and ‘Sundial‘ (now available to preorder), furnished with remixes by names from the very top of the pile: Actress, Ricardo Villalobos, Alva Noto, even Call Super.

Speaking to Inverted Audio, de Laubier discusses the vast conceptual world and artistic trilogy of ‘SPECTRE‘ (of which ‘Machines of Loving Grace‘ is but the first instalment), how creating film scores has impacted his production, and the significance of travelling and the impact of visiting different musicians from as far afield as Bali and Japan, to hunting the source of Kenji Kawai’s mystical vocals in Bulgaria. 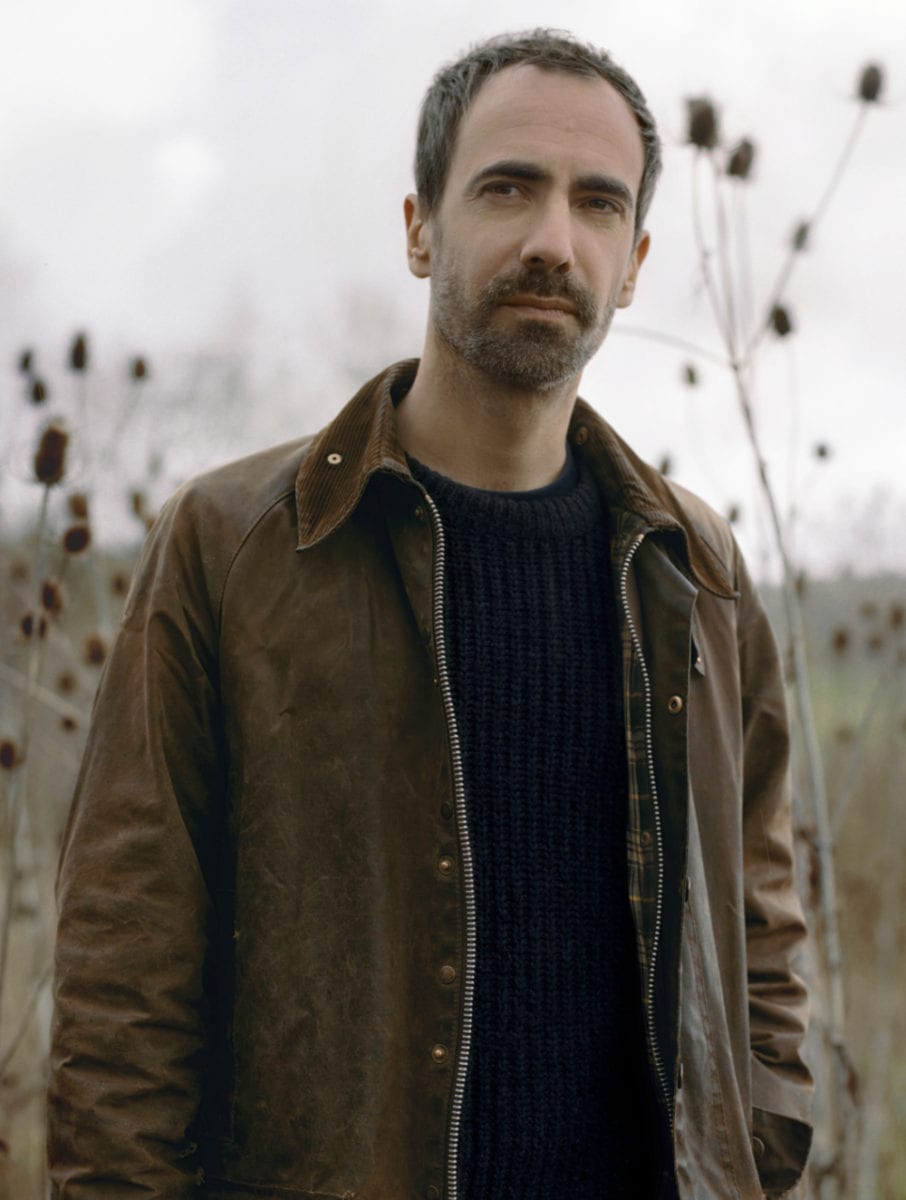 Hi Para One – thanks for answering our questions about this project. I’d like to start with trying to understand a little more about the birthplace of this project. What kickstarted the creativity for this album, and the EPs? Was there a significant moment or event, or something which just came naturally?

It’s all coming back to the idea of making a film, my first feature as a director. As I was working on the script with Céline Sciamma (whom I work with as a composer for her films), I discovered a family secret. That was the event that pushed me to investigate and spend time on the road looking for answers.

I was writing and recording a lot of music along the way, which was supposed to be the score for that film. That’s how ‘Machines Of Loving Grace’ came to life. I realised that I had a whole album, and a whole film, and an idea for a live show. Hence the concept of a trilogy named “Spectre” which contains all of that.

We’re keen to understand more about the concepts here of the film and the live show – We assume that by ‘film’ you are referring to a grander-scale project than the music videos released already? What details can you share from the planned live show?

Yes, it is a grander-scale project than the music videos. ‘Spectre‘ is a trilogy in three parts: the album, ‘Machines Of Loving Grace‘, the live show, ‘Operation Of The Machine‘, which will debut in Philharmonie de Paris on July 11, and ‘Sanity, Madness & The Family’, my first feature film as a director which will be out later this year.

The music videos expand the universe of the film a little bit, but they’re related to it. As for the live show, it’s the first time that I’m working with a scenographer so I’m excited to fuse visuals, light and music all together on stage.

It seems pretty special to have the vinyl edition release through WRWTFWW – one of the most vital labels releasing music within the last 5 years. With the label’s focus on reissues (although, as stated, also whatever they want), how did the conversation around releasing the vinyl through them occur?

I agree that they are amazing! They also happen to be long time friends. It was a dream come true to collaborate with them on this release, along with my label Animal63 ran by Manu Barron. There were many elements in the record that connected with what they had released in the past: OST’s, minimal or ambient music, and so on. So I guess it made sense for them to release my album.

Were you familiar with their previous releases? Have you any favourites?

Absolutely, I have tons of their previous releases. I would say my all time favourites are Midori Takada’s first reissue [‘Through The Looking Glass‘] and the ‘Ghost In The Shell‘ soundtrack.

The Shin Sekai track in particular takes a lot of inspiration from Japanese sources, from the neighbourhood in Osaka to the ‘Ghost In The Shell’-esque vocals and Taiko drums. What fed into this in terms of inspiration?

“Shin Sekai” means “New World” in Japanese and is a key element in the script of the film, but that will unfold when the film releases later this year! I was obviously inspired by Japanese anime soundtracks like ‘Akira‘ or ‘Ghost In The Shell‘, but in that case I tracked back Kenji Kawai’s inspiration, which was originally his fascination for Bulgarian folk music.

So I travelled there and recorded “Le Mystère Des Voix Bulgares”, a cult band from Sofia, that Kawai admired a lot. It was a way for me to connect the dots between all these sparse inspirations and these sounds that I obsessed over as a teenager.

What gave you the confidence to build this out into an EP? Why did you select Actress, Alva Noto and speaKwave for the remixes of this one?

I decided that it was a strong statement to release this song first, just to make it clear that this album was going to be different from the rest of my discography. It also sums up many aspects of the album. Then for the remixes, they’re 3 all time heroes for me. Even speaKwave – people don’t know him under this new moniker but he’s actually Dynarec, a French producer that I’ve admired for a very long time.

Similarly, we’re interested in the reasons behind asking Ricardo Villalobos and Superpitcher to remix ‘Alpes’.

‘Alpes‘ was more of a trip, I wanted to emphasise the psychedelic aspects of the song. Villalobos offered us this very long musical experience, quite intense! And Superpitcher is a friend. He wanted to listen to all of the album and even to watch the film before he did the remix and he delivered in a beautiful way.

After your first two studio albums you began doing a lot of work into scoring. What did this teach you in terms of composing this record? Is it relevant knowledge? How did it shape your musical styles?

First of all, when it comes to modern music on screen, less is more. You tend to learn it the hard way when directors ask you to discard 60% of what you produced for a sequence. But then it is really interesting to listen back to the music without the images and realise that sometimes it actually works as it is.

That gave me the confidence to develop long, relatively quiet parts, in the album, to help contrast with the more intense moments. Also, thanks to Céline Sciamma and her producer, I had the chance to work with many musicians and record acoustic music for the scores I was composing. It then became my team for ‘Machines Of Loving Grace‘.

Your album has been greatly inspired by your travels in Bali, Bulgaria and Japan have greatly inspired you throughout the composition of your album. Can you tell us what you found most meaningful in these trips?

Each of these trips had a specific meaning for me, and was a specific quest for sounds and answers. So it’s hard to sum up all these adventures in one sentence, but I guess the most meaningful lesson was that, harmonically or rhythmically, all of these musicians that we went and met and recorded had their own approach, they were all off the grid in their own ways. In Indonesia (with Gamelan) or in Japan people play in harmonic modes that don’t really exist in a DAW.

So I had to adapt, to study, and to get out of my comfort zone to confront my compositions with their traditions. In Bali I’ve been told that my music was very weird! But that was a really fascinating exchange.

In a way, the two suns that coexist on the cover of the album represent these two possible visions of a world – like the polyrhythms that you can hear at the end of “Futatsu No Taiyo” (“two suns” in Japanese). It’s like different cadences laid on top of each other.

You’ve stated that this was your first hand in acoustic instruments. What did you learn here? Did you learn the instruments before hand, or play by feel?

I’ve tried to learn, for example, the Jegog instrument in Bali, as I was taught by Mr Suwentra, the master of Suar Agung who sadly passed away after we recorded and filmed him. And I was so bad at it! It implies a lot of muscle memory and a mastery of polyrhythm that I couldn’t achieve in a lifetime. This is the music they play everyday. So I chose to record these performers and work hand in hand with them on the compositions.

What learnings from electronic production could you take to the acoustic realm?

Since I grew up listening to loop-based music, I was never drawn to “jams” and technical solos. I think it can become a trap as performers become better and better, to get lost in the fascination for execution. Of course I enjoy amazing jazz records just like the next guy, but to keep focus on my compositions I like to force musicians to express less intensity.

Some think it’s a frustrating experience of course but the result is worth it. I’ve read a piece by Midori Takada in the liner notes for ‘Wave Notation 2 – Still Way‘ by Satoshi Ashikawa that summed up this approach in a beautiful way. I encourage people to read it.

Lastly, if there is a core set of emotions or central feelings you hope to transmit with this record, what might they be?

This album could be described as an attempt at therapy through music. There’s tension and a sense of claustrophobia and suppressed feelings, then it resolves through conflict and finally gives a sense of openness and freedom. That’s what I tried to convey and I hope it translates, because that’s exactly what I’ve experienced by making this record.

‘SPECTRE: Machines of Loving Grace’ is out now via Animal63 and WRWTFWW. Order a copy from Bandcamp.