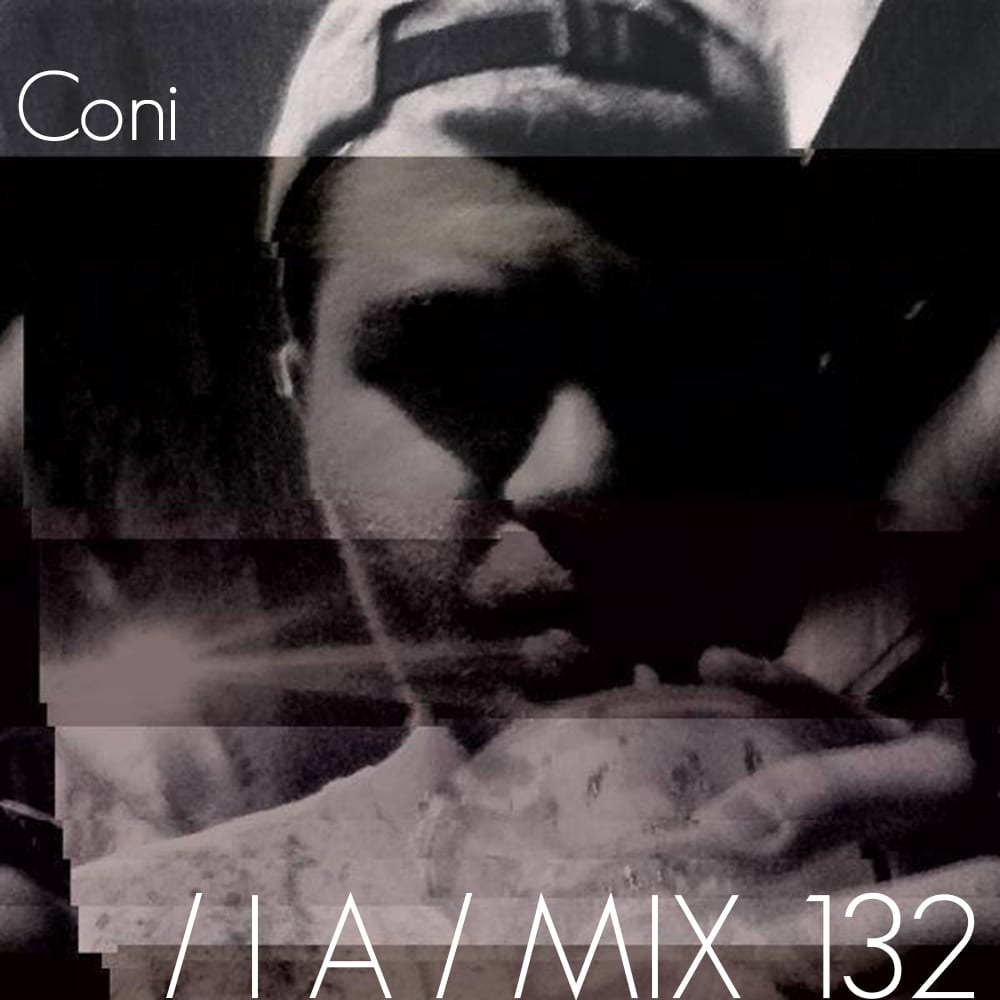 Coni is the alias of Nicolas Olier, a 23-year-old producer and DJ from Paris. As Coni, Nicolas focuses on producing 4/4 house and techno. To date he has solely released records via ClekClekBoom, a French label made up of French Fries, Aleqs Notal, NSDOS, Aethority, Jean Nipon, Ministre X & The Boo. Coni’s records have gained support from the likes of L.I.E.S. boss Ron Morelli, who featured ‘My Secret Diving’ in his favourite tracks feature in The Guardian.

Last week Coni released his follow up ‘Comfort Zone EP‘ via ClekClekBoom. To celebrate we invited Nicolas to record a mix and answer some questions about his new record, musical heritage and involvement with the ClekClekBoom collective. Nicolas also discusses his studio setup, approach to production and his experience of London.

First of all can you tell us a bit about your mix you’ve recorded for Inverted Audio. How was it made, what’s the reasoning behind the track list and is there a particular theme running throughout?

I recorded it in my house, with CDJs, Technics MK2 and a Xone 22 mixer. The main idea was to give a vision of what I like to play at the moment. I was kind of ill so it was not that easy but at least I’m happy with the tracklist.

I picked up some new jams I’ve recently found plus some amazing tracks that I play. Some of them are just tools and others are more personal and iconic. There is no theme I guess, It’s just a voyage thru my prism.

Can you explain how you first got interested in experimenting with music?

In the 00’s I used to listen to a lot of French radio. I was into Radio FG before it became what It is right now. There was some good House podcasts late in the night. Unfortunately I was too young to enjoy DJ Deep & DJ Gregory radio shows but I remember their influence was still present. So basically my first experience of music was this, then the Internet arrived and I started to spend time on forums and other websites.

How did you get to the kind of music that you make today?

I remember I already wanted to DJ when I was around 14, so I just started buying turntables. At this time I was into a large vision of house music (French touch, NY garage ).

I started to try making music around 2009, playing with Ableton but It was not that serious. I was not really into one genre, but I was already obsessed by the samples, trying to rip some YouTube videos to find a good loop. I was not into VST and I was not ready to buy hardware.

Then around 2009 I started to rediscover NY Garage, UK Garage, Detroit techno and of course Chicago house. I think at this time I started to make some music more seriously, spending a lot of time trying to finish some tracks.  And I admit that it was not that easy.

Can you tell us about your relationship with ClekClekBoom? How you got involved with the crew and what’s it like being part of the crew?

I met Manaré first around 2009, at this time I was spending a lot of time in the clubs seeing the DJs that I love and partying with some friends.

Then I sent some tracks to Manaré and he gave them to French Fries, he liked one and asked me to release an EP on ClekClekBoom (which was not created as a label then haha). It was my first EP release so I was quite excited about it.

A year later the label was launched and I did the second release just after French Fries. Then It was not just a deal label-artist, I started to hang out a lot with French Fries, Manaré, Bambounou and the rest of the crew and we became friends.

I would say being surrounded by your friends is pretty important to get excited to make music, you evolve together and you always share ideas and projects. It keeps you awake and gives you a natural motivation to create.

I discovered your music thanks to Ron Morelli, you’ve DJ’d alongside him as well, tell me about your relationship with him and his label L.I.E.S.

I heard that Ron Morelli was playing My Secret Diving EP so I just sent him a tweet to thank him (internet is a magic tool). Then we met in Paris as he lives here now and we have common friends, such as Low Jack and Jean Nipon. I asked him to do the ClekClekBoom Podcast with me and he accepted so we started to get to know each other a little bit more.

About L.I.E.S. I really like the label, I love the mystic energy and the fact that the releases are all different. I’m pretty obsessed about ‘Marcos Cabral – Dancing on Manhattan‘ at the moment, It’s a deep tool for the club.

Following the release of ‘My Secret Diving EP’ how did you see your DJ career progress?

I think people started to understand my idea of club music, they got it that I was really into 4/4. House and techno were my first and most important influences. Plus I had some good support from DJs that I respect a lot.

At least I would say that this positive reaction gave me more energy to continue in my own direction. You know there are these facts that people think you arrive in the music industry with a strong idea of what you are and what you make. I’m not into this idea, I think you learn everyday and as I’m only 23 I feel like I have a lot to learn about myself and my music. I’m building my idea of music and I’m pretty happy about this constant construction.

The track ‘My Secret Diving’ features the crackle of vinyl, why did you include this on the record?

I didn’t do that on purpose but I think It was already here in the sample of the vocal I’ve used, anyway I hate records that sound too digital. I like errors in the music. I like those little noises that build up an aesthetic of a track. I think we need to feel the human being behind and try to forget the fact that it has been built with a digital – too conventional – computer.

You’ve just released your follow up ‘Comfort Zone EP‘ on ClekClekBoom. Tell me about the tracks and how you went about creating them?

About the A1 ‘The Opposite’, there is no idea, I found this interesting gimmick playing with the synth and then I tried to play with the cut off going in and down. I added some compressed toms as murdered knives; I think they give the energy that helps people to dance to it.

A2 is ‘Napalm’, I was playing with some samples and I added sequences of drum machines, I just tried to do a club tool.

The B side is a little bit darker, ‘Bunker’s Groove’ is more experimental and mental, I did it for those weird moments in the club, when you want to test people and see where they goes dancing to your music.

At the end there is this beatless track called ‘Exit To The Comfort Zone’. I used a crazy unknown looped vocal reminding me of an old lost Russian spatial station. Then I added this bleep synth and weird noises that I found interesting.

What kind of emotions do you think the EP conveys?

I am so bad at those questions, I don’t really know, It just talks to me, It’s club music but with a weird aesthetic. I tried to use my elements in a different manner as usual: the aim was to give my perception of what could be club music.

Do you have a favourite track? Perhaps one that is connected to a particularly moment in your life?

Actually yes, I did ‘Bunker’s Groove’ because of the Bunker’s Room in the Austrian club called Pratersauna, I played there early in the morning, and the vibe was pretty amazing, people were getting crazy on weird rhythm tracks, It was something that I didn’t experience before. I tried to recreate this energy in my track, using only samples and going far from the basic  ‘synth + drum machine’ combo.

Are you influenced by a particular environment or traveling when writing music?

I really like going to clubs, watching the crowd reacting to the music, I like the warm mood of a packed club, I feel comfy and it’s maybe the environment that influences me the most to create music.

Traveling is nice too, you just go far from your own place and discover new things, It’s just some experience and I’m pretty sure It can change your process of creation.

Is Coni your full time project or do you have other projects we can look out for?

Yes it is, I’m pretty young so for the moment I prefer to be focused on one project.

Can you give us a run through of your studio setup at the moment?

It’s quite basic, I’ve got a MacBook Pro with Ableton, I use Audio Technica headphones and a Yamaha HS50M. I’ve also got a MicroKorg and I just bought a Juno 2.

Sometimes I use French Fries’ Moog Voyager. I often go to his studio to have a better sound system or at the ClekClekBoom’s studio as well (where we have some drum machines and great synths).

Tell us about your connection with London. Have you spent much time in the city?

Yes I lived in London for 6 months in 2012 for a University exchange but to be honest I spent most of my time out partying and discovering the London scene. I meet a lot of amazing people who became close friends.

I love London, there is an amazing underground club culture. Nowadays I just go to London to play one night so I can’t spend that much in the city but I always try to catch up my friends.

Your music career is relatively young, what do you hope to achieve in the future?

I don’t know. I just want to continue playing in clubs, traveling and continue to release music and meet interesting people. I really love DJing so I hope I will continue to do that for a long time and discover new cities with nice club cultures.

Finally what records are you currently digging?

At this time, I love the new album from Efdemin ‘Decay‘ on Dial, It’s an interesting album: pretty club-oriented but with a wonderful dark twist.

The Dream 2 Science EP is just too good, clearly the kind of tracks that pushed me into the music world.

I also love the new record from Dario Zenker on Trilogy Tapes, this guy is so versatile!

Discover more about Coni and ClekClekBoom on Inverted Audio.