Following her recent performance at the Stream State tour event in London at FOLD with Efdemin and Inland, we caught up with Jamaica Suk and invited her to contribute an hour-long mix of hardline, tough and psychedelic techno.

A powerful statement, emblematic of her energetic and no-holds-barred approach to her live sets, we’re excited to share this mix with you, offering a glimpse into the mindset of an accomplished producer, sound engineer and Pornceptual resident. 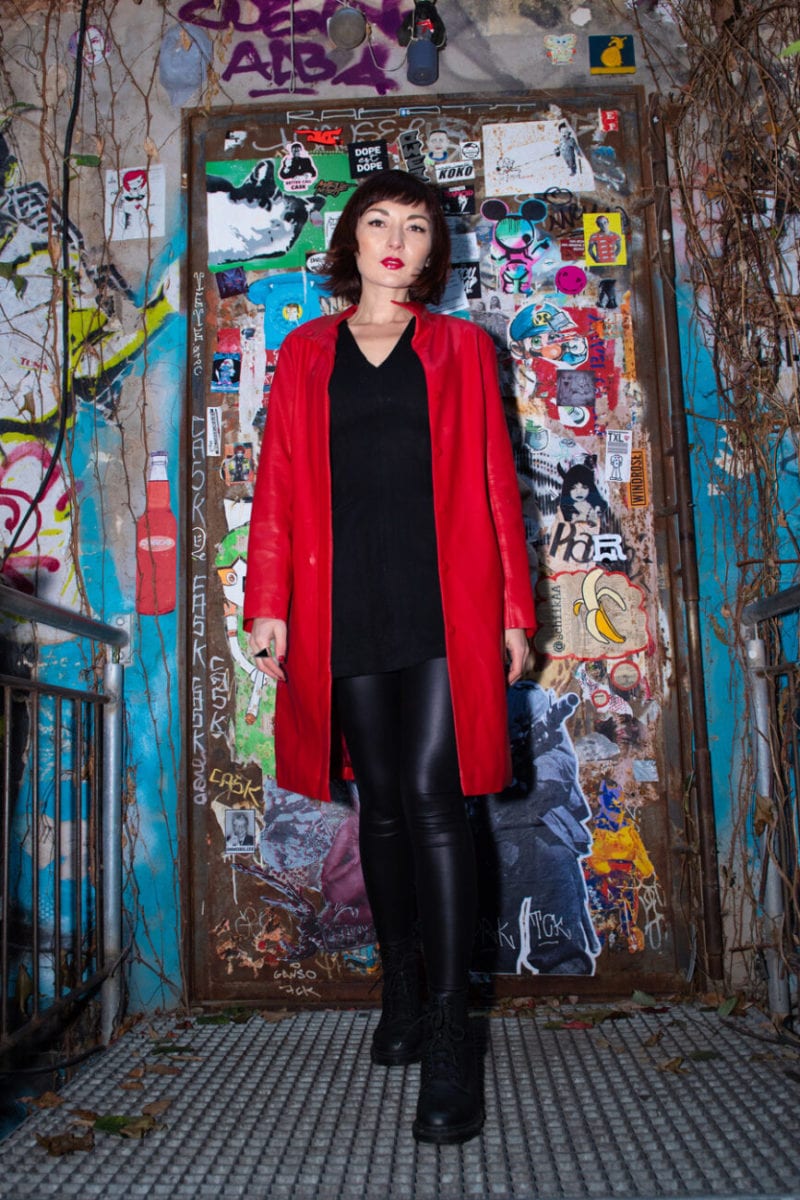 Hi Jamaica – thank you for recording this mix – please tell us where, when and how it was recorded and what atmosphere you have created within it.

Thanks for having me. I recorded this mix in my apartment in Berlin a few weeks ago with x2 Technic 1200’s, an Allen & Heath Xone 42 mixer and vinyl.

This mix resembles some of the atmosphere in my club sets with 90s, Detroit, EBM and psychedelic influences. I prefer to tell a story over several hours instead of squeezing everything into one hour.

You’re currently based in Berlin and have a production studio at Wilde Renate – where is home exactly?

Yes, I have lived in Berlin for 7 years. I’m originally from the Bay Area and grew up in northern California.

Let’s rewind to your teenage years growing up and listening / discovering music. How did you become interested in electronic music, who introduced it to you – and what artists and albums were you playing non-stop?

I started going to raves at 16. I remember attending a grind-core show at the Phoenix Theater in Petaluma and someone handed me a flyer for a rave in Oakland.

My friends and I would sneak out to raves to dance to jungle, happy hardcore and trance. There we listened to acts like Rabbit in the Moon, DJ Reid Speed, Garth and Jeno to name a few. At home on repeat I listened to bands. Anything from post rock, doom metal to math rock. I loved The Locust, Neurosis, Godspeed You Black Emperor! and Merzbow.

Raves were my gateway into underground house and techno music. I was addicted to discovering new music I liked and searched for it in clubs, underground parties and record shops. I moved to San Francisco at 18 and to get into clubs you had to be 21. I remember going through a few fake ID’s.

One underground venue I frequented was called The Compound. They booked a lot of European acts and it was located at the end of the city in a neighbourhood where you do not want to get caught walking around late at night.

The Compound was located on private property in a large industrial abandoned looking building. There was a security guard at the gate and you had to say a password to get in. DJ’s often played extended set times which is not so common in North America.

The Bay Area’s underground scene inspired me and I became friends with other DJs in the area. I organised my first underground party at 19 and booked some local heroes who played house, techno, and disco. Some played this darker, linear, futuristic vibe which I like. Techno had a grittier, emotional sound and the city was filled with soulful house at the time which just wasn’t my vibe.

Do you remember encountering a set of turntables or walking into a record shop for the first time? When was that and what did it make you feel?

The first record shop I walked into was The Last Record store in Santa Rosa. They have a large punk, rock and metal section and not so much electronic music. I felt the new sounds I searched for were drifting from Detroit and Europe.

Did you study music or learn an instrument at college – if so what instrument did you pick up and how has that helped shape your approach to music now?

Music came into my life early. I started with piano at age 5, then played the flute and picked up the bass guitar. During my freshman year of high school I auditioned to play flute for my high school and was denied. There were too many flute players so they asked me what else I played. I ended up auditioning as a bass guitarist and was accepted.

I was the only bass player for all of the school’s ensembles including the senior jazz ensemble and big band. 1 year before finishing high school I auditioned for my city’s college jazz band and was accepted. I played simultaneously in the high school’s ensembles, college jazz ensemble and numerous bands in the area from post rock, shoe-gaze to grind-core.

My first director was from Germany and had a stern approach to perfectionism. Working with him shaped my approach to music as well as practicing often and playing multiple genres.

Musical discovery these days is far too easy, algorithms reboot our musical tastes and direction on a daily basis – how do you go about discovering new music these days and what do you think the future holds for musical discovery?

There’s so much music being released these days it’s an exciting time. I shop at used record shops, Discogs, Bandcamp and subscribe to my favourite label’s to get updates. I also frequent local record shops HardWax and Spacehall. I’m not sure what the future holds for musical discovery but I’m hoping there’s still a market for vinyl.

Apart from music? What else do you like to pursue?

Music is my main passion, work and hobby. I teach production lessons on the side and I’m addicted to coffee, traveling and spicy food.

How did you meet Ed Davenport?

We met through Cassegrain at an artist dinner.

Your track ‘Drumtaktics‘ is set for release on the ‘Stream State‘ compilation. Tell us about the makings of that track and how this came to be included in the compilation?

I’m proud to contribute this track. I’m a fan of Ed’s music so I was happy when he contacted me about the project. I sent over a few ideas and ‘Drumtaktics’ was his favourite.

You’ve recently been on the Stream-State tour – specifically at FOLD in London – how does the crowd and atmosphere of clubbing compare in London to Berlin?

FOLD was ace. I dig the space, lighting, sound system and the crowd. London is different from Berlin and has shorter clubbing hours with less events on the weekend to choose from.

You also perform regularly at Pornceptual – how did you get involved with that crew and what does it mean to be part with that collective?

I met Chris Phillips five years ago in Panorama Bar. I sent him and his partner Raquel Fedato some of my sets and they ended up booking me. We got along well and the rest is history.

Pornceptual is an art collective, magazine and party. Being part of the collective means supporting freedom and equality while challenging some mainstream ideas.

DJs who mix out of your last track too early.

‘Stream State’ is scheduled for release via Counterchange on 21 February 2020. Order a copy from Bandcamp.

Discover more about Jamaica Suk and Counterchange on Inverted Audio.