Was this the most anticipated DJ set of 2018? Did it deliver against all the negativity, befuddled organisation, extortionate ticket price and questionable venue? I will attempt to answer all of these questions in this review, but what I can say is that Thursday 1st November 2018 will go down in history as one the most intense, mind-bending DJ sets that I am likely to ever experience in Berlin.

Following a 20 minute taxi ride from Kreuzberg, I arrived at Funkhaus, the former East German radio-broadcasting structure on Köpenicker Chaussee (think of it as the BBC of the DDR). Built in 1951 by Bauhaus architect Franz Ehrlich, Funkhaus was originally home to three thousand workers employed to put on shows, symphony recordings, lectures, audio plays, and other culture-related works. Nowadays it is a vast complex made of performance halls, artist studios and the 4D Monom spatial sound studio.

We were drawing closer to the fateful time of 8pm, and Dopplereffekt were scheduled to perform imminently, I passed through security and headed for the cloakroom, only to be informed that I needed to top up my ticket in order to pay for jackets, drinks, food and anything else on sale at Funkhaus. 30 minutes and 50 euros later I was finally ready to roll. 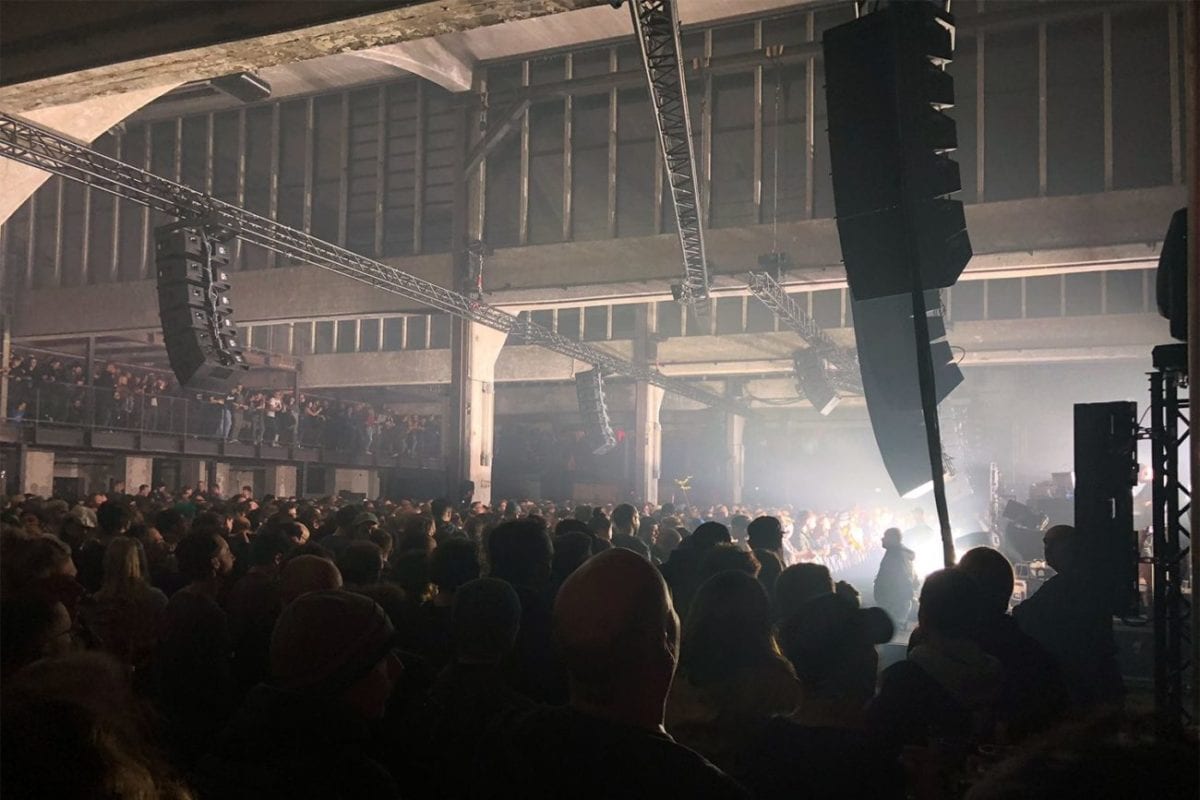 The event hall itself is of a colossal size. Thick with concrete and limestone, the entire roof is composed of a series of giant quarter-round concrete envelopes that give the space an almost cathedral-like vibe. A sea of people started to congregate in the great hall soaking in the futuristic sound of electro-experimentalists Dopplereffekt, whilst lights beamed across the expanse.

Having arrived early, I was able to gain access to the balcony that skirted the arena, offering impressive views of the hall and access to two scantily staffed bars. Strangely access to the balcony was operated on a first-come, first-served wristband system. Frustrating for others, we got ours early and took advantage of the viewpoint whilst watching Paradox play a breakneck set of UK Drum and Bass and Jungle taking us straight back to the mid-90’s rave continuum.

As I watched from the balcony it was clear that the hardcore ravers moshing at the front were really into it, whilst the audience at the back was not so enticed. However, having personally grown up on a healthy diet of drum ‘n’ bass, and more specifically Hardware Recordings in my teens, it was a rush to see Paradox play. Even though he’s now turned 50 years old, the man’s still more than capable to whip up a frenzy, and his grand finale to the pace of “A Certain Sound” was there to confirm.

Paradox finished early and over the next 20 minutes I headed down to the dance-floor, weaving through the crowd to find a good spot. Technicians scuppered up on stage to set up Richard’s equipment, which proved to be problematic. Something was not right, technicians were still on stage inspecting and rewiring cables causing the crowd to become impatient. 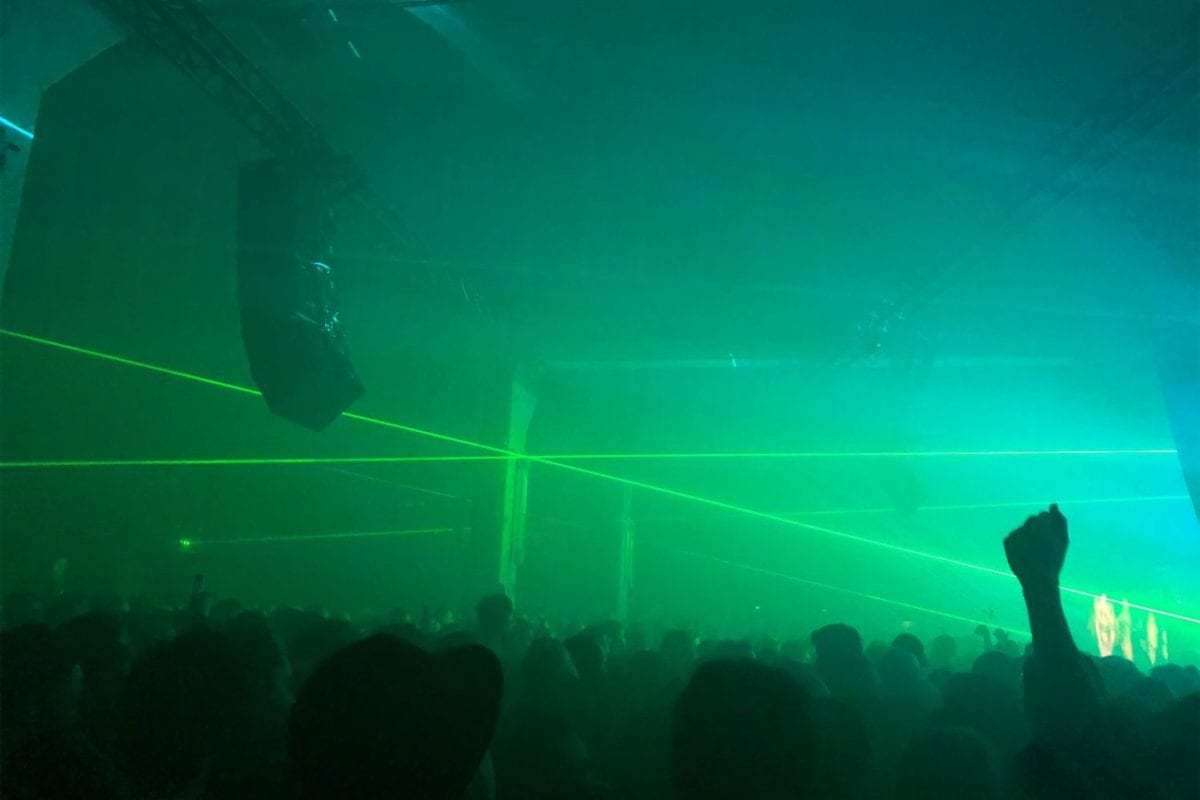 Digitised imprints of the Aphex Twin logo eventually emitted from LED panels on stage, giving confidence that the show was about to start. However it was still unclear if Richard had even arrived on stage, after all there was a huge screen in front of him and the lights were intended to make it as hard as possible to see his face. All I was able to discern was someone wearing Orbital-style head torches. Ominous sounds then started to emerge from the speakers – distorted bleeps, rolled vocals, then chords reminiscent of his new track “pthex” taken from his ‘Collapse‘ EP strummed out along a bubbling breakbeat. Things were gearing up.

Over the next 30 minutes Richard played tracks from the likes of Second Woman, Zuli, Royal House, M.E.S.H. and Bicep, bit it wasn’t until the 38 minute mark – when he mixed together Holy Similaun’s “Mtazmex” with Skee Mask’s “Torpor 12” – that he pricked my ears. As the set continued AQXDM (Aquarian and Deepmash) “Ballad 002” and Zuli’s “What you Do” and “Trigger Finger” segued into one another seamlessly, before Aphex slowed things down with a breakbeat version of “Vordhosbn” making clear that the king was back in town.

The final stretch of the set contained the most blistering of music. Hardcore rave stabs from ZEKT “External” lead into a melodic track by Current Value before the aptly named “The Destroyer” was dropped in, thrusting listeners into a 5 minute finale fusion of stretched out/slowed down noise that sounded like some abstracted version of “Come To Daddy“; it was beyond abrasive. LED panels, lights and lazers blinded the audience into a state of pain and ecstasy. Weirdly at that moment I closed my eyes and an imprint of the warped wave forms, designed by Weirdcore, were etched on the inside of my eye lids.

When the music stopped there was a split second pause as the audience pieced together their ears and rewired their brains, then a huge roar erupted from the crowd. What we had just experienced was an apocalypse of cataclysmic effect. I remember hearing a vocal sample at the beginning saying “we are about to take LSD” and I can confirm that Aphex Twin provided an all-encircling trip for the mind, body and senses. Was it worth it? Absolutely.