It had been approaching for some time – Aphex Twin’s inevitable return to London and Saturday 14 September 2019 marked that day. His performance at Field Day 2017 was no mitigated affair, but this event, presented by Red Bull Music Festival and hosted at Printworks, felt more like the real thing: a homecoming for the music Aphex has become completely synonymous with. The night was awaited with no small controversy, a seemingly typical factor, judging from our review of Aphex Twin at Funkhaus last year, but in time and on the night these minor wounds became healed.

Caterina Barbieri kicked the event off, in a beautiful white dress, matched by the delicate power of her music. Smoke coiled around her as she opened up the night with hypnotic patterns gleaning from her latest album, ‘Ecstatic Computation’. It’s febrile music, yet filled with an intelligence of the body and soul — something like self-awareness, there’s a personality behind Barbieri’s music which seems to come from something other than herself.

Next up are the curveball support, the Nyege Nyege-certified Nihiloxica, for their very first time in the UK. Composed of a Ugandan drum ensemble alongside two Brits supplying additional kit drum supplements and electronic steroids, they weave an enrapturing set that breaks boundaries and borders. By the end of their set the crowd are leaping around to a traditional rhythm that prepares young men before they’re circumcised; the Ugandan frontman screams “ARE YOU READY FOR THE KNIFE?!” as they reach their fever pitch.

For the many late arrivers many the interlude between Nihiloxica and Aphex Twin would be the only point to enjoy the venue. Printworks is certainly an incredible space, with high industrial cliffs on all sides, laced with piping and walkways and capped in darkness. There was something more though, a little special event for the night. 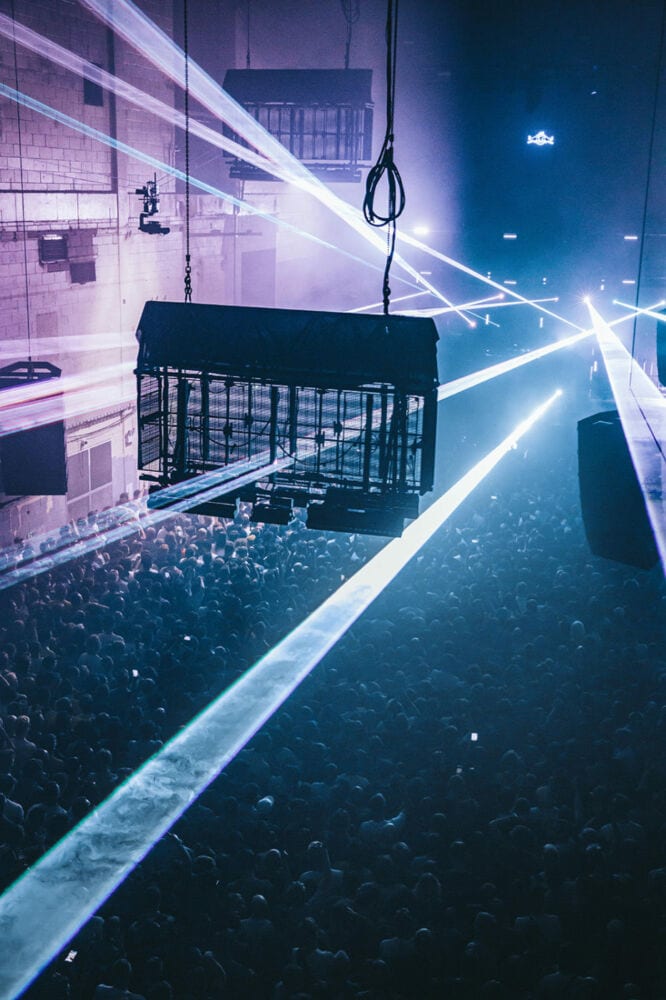 Bluman Associates, the design team behind the astonishing artwork and accompanying collateral advertising material of the Collapse EP, developed a fully interactive plinth. Tracking hand movements across nearly every conceivable movement and rotation, ravers were invited to stand and control the artwork with gentle motions, natural and synthetic landscapes plunging and soaring around AFX’s symbol. The highlight of the display was certainly the facial recognition, with each user getting stamped with James’ unmistakeable sinister grin.

It was a collaborative work, with input from programmer/designers Kyle Reseigh and Lewis Kyle White, but the installations interactivity was without a doubt its greatest success. Everyone approached it in a new way and created endless permutations. It’s a celebration of individuality, but also AFX’s recognisable artistic imprint.

Anticipation, having swollen with the crowd, bursts within minutes as Aphex begins. There’s little that can be said to truly convey the course of the next hour or so, such is the chaotic energy and overwhelming intensity of the sound and lighting. The leylines of dance music are mined, and the richest treasures to find are pulled forth for the crowd to be held in wonder of.

It was as if clubbing as a historical event was captured and flashed before the widening eyes of an exhilarated crowd; like Muybridge’s Galloping Horse, even to those who understood the science of what AFX was doing the result was undeniably magical. Down on the floor, there were no stern faces, only beaming grins and bewildered wide-eyes.

Blasts of noise become shredded by blistering jungle and hardcore; techno rises, grooves, and is pushed out by something sterner; electro shudders centre-stage briefly before being overcome by jack-knife house… the sheer pace of the transitions leaves the room reeling, putty in the hands of the man-machine at the centre-front. 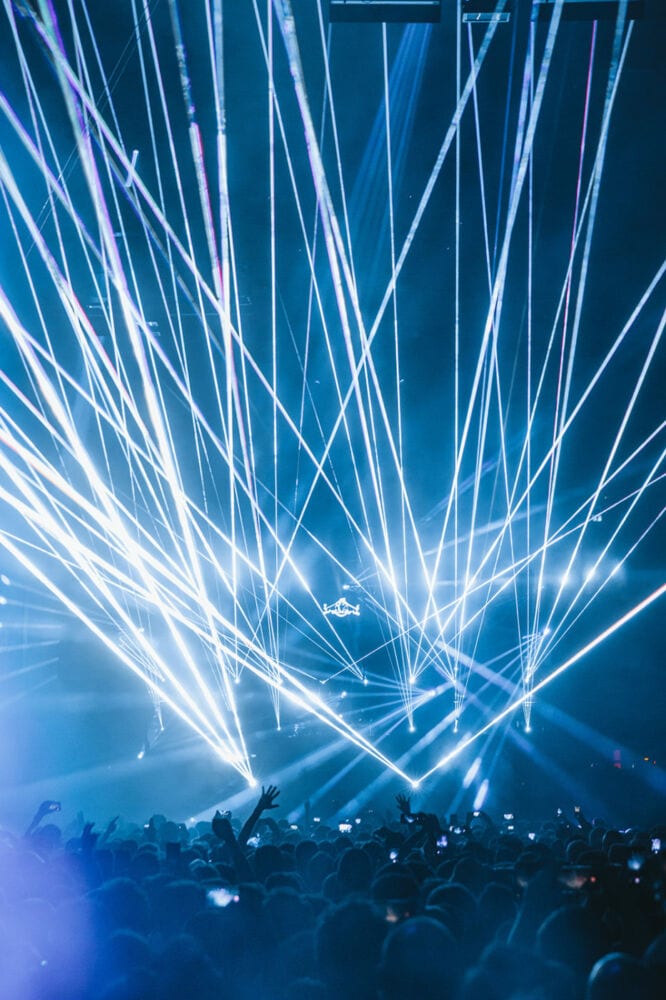 The lighting rig could probably be a subject of a thesis. The front podium was augmented beyond comprehension with screens and lasers, and the choreography of the beams and the moving screens above the heads of the crowd was something to marvel at. It’s a blessing it was recorded, even if it only spares the task of enshrining it adequately with words.

There’s one last honourable mention though, for Afrodeutsche. It cannot be a fun task, preparing the sequel set to Aphex Twin, but the diverse DJ/Producer stepped up and delivered. Re-entering the room to heavy hardcore, under her guiding hand the tempo shifts without a bump to 130bpm-range, where she demonstrates incredible technical ability. Fully graduated from the list of ones-to-watch, she’s clearly a formidable artist in her own right. Sleep not.

As a whole, the event was pure joy; a flawless exhibitive performance. It cannot, however, be avoided that it was marred slightly by those aspects of commercial dance music and clubbing. If the ticket was prohibitive in price, it seems fair that the whole thing was streamed live for prosperity, and for those unable to travel for the show.

Over-inquisitive security, VIP walkways with stationary inhabitants, roaming camera crews desperate to capture any individuality: these are newer aspects of the culture which, in certain situations, we’re beholden to accept as a token of exchange — especially in the event of such a high-budget affair. In return, we’re given the pinnacle of performance shows.

The kind of magic that wrapped the room is only achievable by someone of this calibre. The flow was astonishingly fast paced, and by the end of the night the crowd had exhausted their repertoire of dance moves, but at no stage did it seem over-rushed. There was a spectre of absolute control behind the frenzied sonic explosions and sensory wonders pouring directly into your brain — a spectre whose face and emblem we all know well, superimposed onto other bodies, onto the bloodline of electronic music, onto modern dance culture itself.